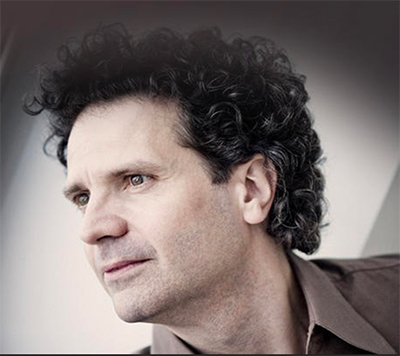 Although Andreas Haefliger’s repertoire list spans centuries, there is one composer who particularly fascinates him. “I have spent a tremendous amount of time with Beethoven,” the pianist said during a recent telephone conversation. “I also spend time putting him into programs that illuminate and bring out a different perspective on the sonatas that we know so well.”

“With a shift in tonality, Mozart has the ability to put you into a completely different psychological state, and that state means something different for every person,” Haefliger said. “And Beethoven does that as well in these two sonatas — especially in 106 where you have such a powerful slow movement that lasts twenty minutes. The shifts of tonality produce a calmness and induce a meditative state.”

The pianist explained that Mozart’s Adagio is built on a triad, as is the “Hammerklavier,” which explores that triad in each of its four movements. “I know of no other work — except maybe the Copland Variations — that is built on four notes and two intervals. I think that writing a 45-minute work that is built only on triads is a tremendous architectural achievement.”

Haefliger said that Beethoven’s Op. 101 is an endless melody. “The tonic isn’t reached until the third page, so you are in a state of constant suspense. The slow movement is so short but so strong, and the humor and wit of the last movement bring us right into the Austrian countryside.”

Both Beethoven sonatas occupy the composer’s late period, which Haefliger said was a time when the composer no longer felt the need to conform. “What makes the entire Beethoven cycle interesting is that each sonata stands on its own. Yes, you can group them together as exemplifying the middle or late periods, but already in Op. 81, he starts moving into a perception of the impossible. He is expanding his matrix all the time — what would have been deemed impossible just ten years before suddenly became possible. The extreme harmonic shifts, and the harmonizing of the second theme as he does in Op. 106 — where each note of that simple melody is accompanied by five or six harmonized notes — is something that would not have been possible in the times of the ‘Appassionata.’”

The pianist’s fascination with Beethoven can be traced back to his childhood. Born in Switzerland, he grew up in a musical family — he is the son of famed tenor Ernst Haefliger. “My affinity is for the European repertoire just because I heard so much of it when I was young. When I was seven years old there were all these lieder I had to accompany in my father’s studio. There’s an imagination that grows with the reading of the German fairytales that extends into Schumann and creates a sensibility around that repertoire.”

While he said that he enjoys teaching, Haefliger has chosen to shy away from pursuing an academic position because he feels he can offer more to a student by offering extended lessons over a period of three days. “These three days incorporate physical work and psychological work, as well as work at the piano. It’s not that I evaluate them or send them to a psychologist, I try to find points where the person can benefit. When I see a block, it can be in character or personal expectations, and that is reflected in their sound and in the tightness or lack of tightness in the body. But every person is different and I can accomplish a lot in those three days. I’m not somebody who would want to influence a person every week, and that is something that you have to do in academia.”

Another one of Haefliger’s passions is chamber music, although he feels that in its ideal form, it should be practiced by a group of friends in small surroundings to a small but dedicated audience. These thoughts led to the formation of the Louisiana Boathouse Ensemble, which actually plays in a boathouse at the Louisiana Museum near Copenhagen.

“I’ve had the pleasure of being attached to an organization that has the wherewithal to make chamber music happen by the sea in a little boathouse that seats 30 people. When you can do that, I think it benefits the music tremendously. To have the audience be part of the rehearsal process, to talk about the program, play it, and then have dinner together, is an unconventional but humane treatment of this music. So it is a dream come true to be able to do this there. The Louisiana is an amazing museum with a great Giacometti collection.”

Speaking of Haefliger’s other musical interests, he was once asked by a journalist to name two artists he would have liked to collaborate with. His answer was Amy Winehouse and Joe Cocker.

“I don’t listen to other types of music very often because I get distracted or bored quite quickly,” he said. “These two fascinated me. They both had a performance spirit, and an intense humanistic spirit that interested me. It would have been great to have been onstage with them. I will always listen to new people as they come along, but not very often am I fascinated. There’s a certain intangible quality that someone like Maria Callas had that makes you want to finish listening — you feel a physical connection to what she does. To break through this fourth dimension is the greatest achievement of the artist. And I felt they had that.”

Regarding his current non-classical fascinations, the pianist said that he has a long list of people he wants to listen to, adding that a current interest is Fado. “I even see the potential for mixing Beethoven programs with Fado because sometimes the expression is so close that I feel like it could be an eye-opening experience. But one has to be careful not to get gimmicky — I really dislike gimmicks. On my website I talk about my interest in kung fu. It’s not because I want people to think I’m Bruce Lee. It’s simply that practicing it has given me a lot, and when people read about it they might get over a stigma or perception that they have about it. It’s the same with programming. When you program Fado with Beethoven just to be ‘interesting,’ then you are walking a very dangerous path of insincerity and sensationalism. But I think interspersing some of the late sonatas with Fado could make for an incredible evening.”

The cimbalom was the feature of the show, an instrument capable of taking on many personas. Its performer, Chester Englander, has shaped his career around the instrument, and has inspired composers to write more repertoire for it, some of which was presented on the program. END_OF_DOCUMENT_TOKEN_TO_BE_REPLACED

You wouldn’t expect that acoustic from a glance at the nave, which is wide and long, but not especially lofty. But when I guest conducted a local amateur choir and professional orchestra in Beethoven’s Mass in C there a few years back, during the first rehearsal we released the final chord of the “Gloria” and listened in astonishment for the next several seconds. The sound continued to roll down the space like the big wave that surfers dream about. END_OF_DOCUMENT_TOKEN_TO_BE_REPLACED