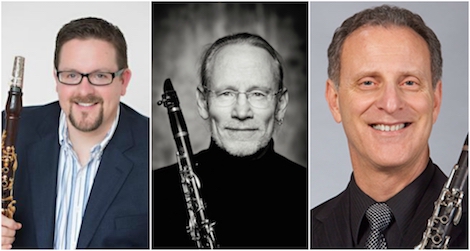 Klein has given many concerto performances in his 22 years as principal clarinet in Canton, but Saturday will be his first time with the Copland. That course was set after a conversation last year with Zimmermann.

“He called me up to the podium before rehearsal and said, ‘What’s on your bucket list?’ Keep in mind, I’m going to be 65 this November. I thought, am I up to doing another big concerto?” Klein suggested Weber’s short Concertino, and hummed the tune for the conductor, who said, “I hate that piece.” 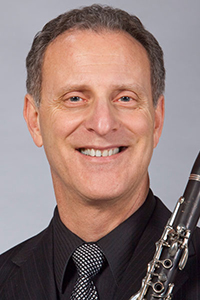 Zimmermann then asked what concertos feature a small orchestra. “Out of my mouth pops, ‘Well, there’s Copland,’ and I immediately regretted it. I’d thought I would just play my last season, worry about the pieces at hand, and that would be it — and the Copland is a beast, especially endurance-wise.” Zimmermann said, “That’s a great idea!”

Klein described the controversy between Copland and clarinetist Benny Goodman, who commissioned the piece. “Copland gave it to Goodman, who wrote back saying, ‘You’ve got to do this, you’ve got to do that.’ Especially for the last two pages — he said he couldn’t play it. Copland said, ‘Well, wait a minute. I took those from the licks that you play in your jazz.’ It went back and forth, and finally there’s the version that we have. There’s also the original manuscript, but 99% of players perform the revised version that everyone’s come to know. It’s a wonderful piece.”

The clarinetist noted one thing that bothers him in some performances of the piece. “It starts piano, but with the large intervals going up high, some people play it louder just to be safe. I don’t like safe — I’ve never liked that. Not that I have a penchant for crashing and burning, but it will be piano when I play it. And I’m not saying I’m the only one who does that.” He pointed to Richard Stoltzman. “He wanted it very ethereal, floating on air, and he’s absolutely right. It needs to have that feeling to make it special.” 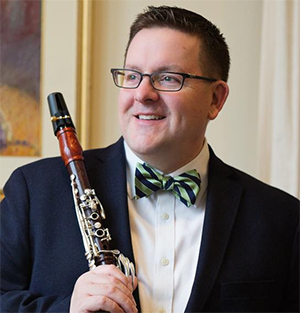 At 8:00 pm that same night — Saturday, March 3 — Oberlin Conservatory professor of clarinet Richard Hawkins brings the Corigliano Concerto to Finney Chapel. In addition to that work, Raphael Jiménez will lead the Oberlin Orchestra in Stephen Hartke’s Muse of the Missouri and Richard Strauss’ Till Eulenspiegels lustige Streiche. The free performance will also be streamed live.

The Corigliano holds a special place in Hawkins’ career. After winning the concerto competition at the University of Michigan with the piece, he took it to another competition, this one held by the National Symphony. Winning that, he made his professional solo debut with the orchestra in four subscription concerts under Mstislav Rostropovich.

But the Corigliano Concerto was absent from those programs. Hawkins played the Copland instead.

“Rostropovich loved the Corigliano,” Hawkins said. “But he told me on the spot, ‘Give me your repertoire list, because I’m not going to be able to conduct this.’ It’s really difficult, and he was not a particularly great technician, just a great musician.” The clarinetist lowered his voice to a growl to imitate Rostropovich. “His voice was like that.”

Rostropovich chose Copland from Hawkins’ list. “He had never done it, so he was excited, and I had about three months to learn it.”

A side note on the Copland and Rostropovich: Hawkins remembers meeting with the conductor before the first rehearsal and discovering his photographic memory. “He sat down with the Copland score for the first time with me in the room, went through it in about three minutes, and closed it. He could literally look for a few seconds and turn the page, and it was all there. It was super-human.”

The Corigliano is widely known as one of the hardest works for the clarinet. “It has everything the instrument can do,” Hawkins said. “It’s an exhausting piece with a lot of calisthenics, jumping around, and playing loud and aggressive — plus something really long, legato, and beautiful in the second movement.”

Hawkins laughed when I shared a quote from the composer about Stanley Drucker, who premiered the work with Leonard Bernstein and the New York Philharmonic:

When I showed Stanley the first movement of the concerto, it was the only time I’ve ever seen him in his life look terrified. But I showed him his part, and his eyes got very big. And he said, ‘How am I gonna play this?’

“The Bernstein recording — the live performance — is just phenomenal,” Hawkins said, adding that one of his friends, clarinetist and saxophonist Lawrence Feldman, was at the premiere, sitting near the front row. “He told me it was the most stunning thing he had ever seen.” 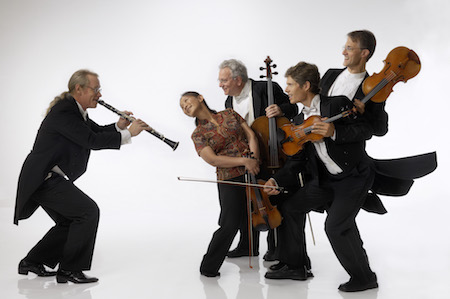 Allan Ware will bring the action to a close in a free concert on Monday, March 5 at 7:30 pm at West Shore Unitarian Universalist Church. As part of the Rocky River Chamber Music Society series, Ware will perform the clarinet quintets of Carl Maria von Weber and Johannes Brahms with the Ciompi String Quartet (violinists Eric Pritchard and Hsiao-mei Ku, violist Jonathan Bagg, and cellist Fred Raimi). The Ciompi will round out the evening with Mozart’s Quartet in D, K. 575.

“I’ve been playing with the Ciompi for 20 years now,” Ware said. “We get to celebrate that a little bit — they agreed to do two clarinet quintets. I wanted to show the two different sides of what I can do.”

Ware called the Weber Quintet flashy, but added, “Too many clarinetists play his music as if the only thing important is how fast you can do it. There’s a lot of early Romantic material in there, and a lot of moments where one needs to take a little more time.”

Weber “begged” Heinrich Baermann for the opportunity to write for him, Ware said. “Baermann was much more famous at the time than Weber, and the piece is tailored to what Baermann could do well. But I always think of the f-minor Concerto — it’s so beautiful the way it was written by Weber, and then Baermann took it, turned it into this flashy thing, and gave it the reputation that it was just fast clarinet music. So that’s what I have in my mind when I play the Weber.”

Ware said that Brahms, the famous composer on the other hand, went to the lesser-known clarinetist Richard Mühlfeld. “Brahms heard him play once and then wrote all these wonderful pieces at the end of his life — the Trio, the Sonatas, and this Quintet. Brahms digs more into what the clarinet can do in terms of expression and depth of thought. Weber is a little bit more superficial, but has some moments where you think, ‘Wow, the guy really did have a deep side.’”

A soloist and chamber musician — and winner of the Grand Prix at the 4th International Chamber Music Competition in Paris — Ware is based in Osnabrück, Germany. His North Carolina origins tie him to the Ciompi, who were founded at Duke University in 1965 and are currently in residence there.

“For me, the Ciompi Quartet was always this godlike ensemble in North Carolina,” Ware said. “And we’re good friends. We just get along really well.”