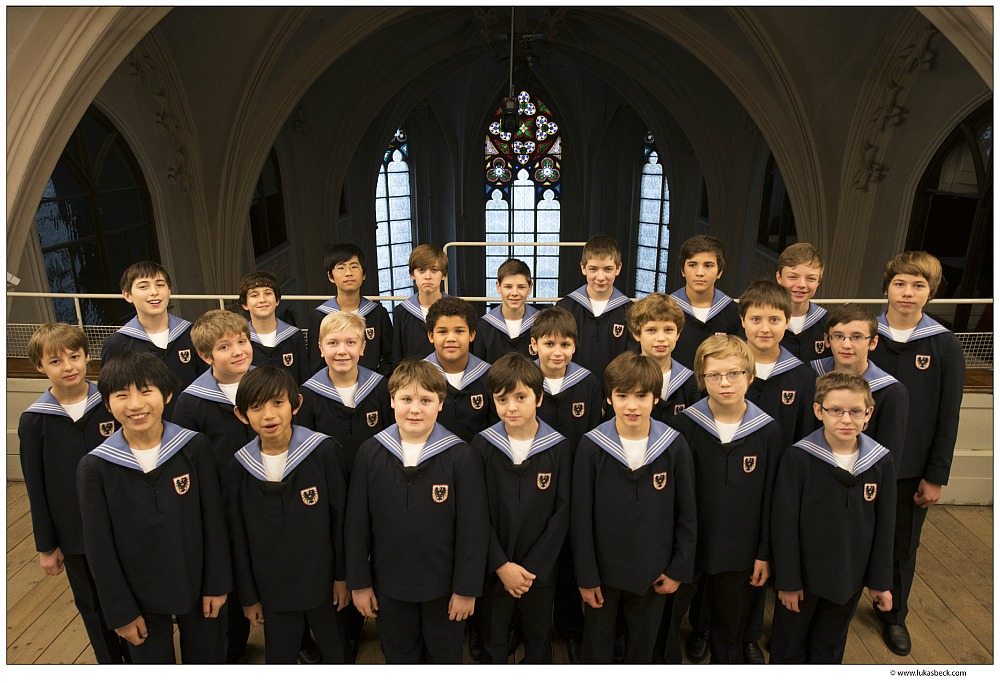 Let it never be said that the Vienna Boys Choir, which visited Akron for a concert at E.J. Thomas Hall last week, puts on a dull show. The singers themselves tend to stand stock still, yet this default mode of immobility makes the group’s occasional choreography — and director Manolo Cagnin’s energetic movements as both conductor and pianist — all the more exciting to watch.

Every so often children darted off to retrieve instruments, and the group moved into a new formation for just a piece or two. This restrained visual dynamism mirrored the flow of the program itself, with its eclectic first half and seasonal second.

In this concert on Wednesday, November 29, presented as part of Tuesday Musical’s FUZE! Series, the group paced itself with precision. The twenty-five singers intoned their opening number, the 9th-century chant Veni creator spiritus, as they walked on and took to risers flanking the piano. This processional flowed without pause into a verse of “O Fortuna” from Carl Orff’s Carmina burana, which — given its lyrics lamenting cruel fate — made for an apocalyptic opening on a Christmas program. This allowed the group to build incrementally to a joyful conclusion later.

Highlights of the first half included a portion of Vivaldi’s Gloria in D that allowed the choir to show off its tuning, even in knotty chords; a Cappriciata à tre voci by Adriano Banchieri marked by remarkable dynamic nuance; the slow middle portion of Heinz Krachtowil’s Jubilate Deo, full of luminous clusters of adjacent notes; and the violin and guitar solos that accompanied Astor Piazzolla’s Libertango and Bob Merrill’s “Mambo Italiano.”

Gioachino Rossini’s Duetto buffo per due gatti (“Duet of the Cats”), which sets the word “miao,” yielded laughs — but also pointed to the soloists’ striking control of individual vowel sounds. Given the choir’s home city, the first half almost had to end with Strauss family waltzes, and the children delivered, with Cagnin rocking along at the keyboard.

As a much-appreciated introduction of each member revealed, the children in this choir hail from more than a dozen countries. The full choir, an ensemble of a hundred that splits into touring contingents like this one, embraces even more of the globe. Fitting, then, that the second half of the concert should feature internationally sourced Christmas songs in a musical tour of the world.

The most affecting moment in the cavalcade of carols came halfway through, when a soloist stepped forward to sing the last verses of “I’ll Be Home for Christmas.” Not listed in the program nor commented upon in the moment, the song’s appearance made an outsized impression. Just jazzy enough to recall the song’s wartime origins, the solo verses induced a bittersweet nostalgia beyond the performer’s years.

Two encores followed: a moving rendition of Franz Biebl’s Ave Maria (1964), and a medley of sacred and secular tunes from the film Sister Act. We can be grateful that these singers brought this program to Akron, so far from their own homes but, to judge by the amount of applause, a welcoming stop along the way.