The Cleveland Orchestra will celebrate the birthday of Dr. Martin Luther King Jr. for the 40th consecutive year on Sunday, January 12 at 7:00 pm in Severance Hall. Assistant conductor Vinay Parameswaran will lead the Orchestra and the Martin Luther King Jr. Celebration Chorus, William Henry Caldwell, director, in a program whose repertory departs slightly from past concerts.

“There won’t be a featured soloist this year,” Parameswaren said in a telephone conversation late last month. Instead, the majority of the program will feature African American composers.

“We’ll open with Adolphus Hailstork’s Fanfare on Amazing Grace, then move to a couple of pieces from Duke Ellington’s suite, The River, and on to the first movement of Florence Price’s First Symphony. Jahja Ling is going to conduct her Fourth Symphony in April, and I’m doing a movement from that piece with the Cleveland Orchestra Youth Orchestra during the Open House on January 20. It’s nice to get to celebrate a composer like Price, who wrote a ton of music and had premieres performed by the Chicago Symphony and other big orchestras, but who doesn’t make it onto concert programs very often these days.”

Duke Ellington’s music is a similar case. “I’ve conducted his Harlem and I’ve studied his Three Black Kings,” Parameswaran said. “Ellington doesn’t get as much recognition for his orchestral writing as he does for his jazz, but he certainly knew what he was doing. Again, it’s a rarity to find his music appearing on a classical program, but I’m glad it’s on this one.”

The rest of the program will be a mix of classical repertory and spirituals, including the last movement of Ralph Vaughan Williams’ Five Mystical Songs, “The Promise of Living” from Copland’s The Tender Land, and an arrangement of Deep River. “Of course, we’ll end with Lift Every Voice and Sing. The whole program will follow the trajectory of Dr. King’s life, his movement, and the work that’s being done today.”

Given the national emotional climate at the moment, Parameswaran believes that this annual celebration and the restatement of Dr. King’s message is more important than ever. “There’s no better way to bring people together than through music, so this program has a high degree of relevance. 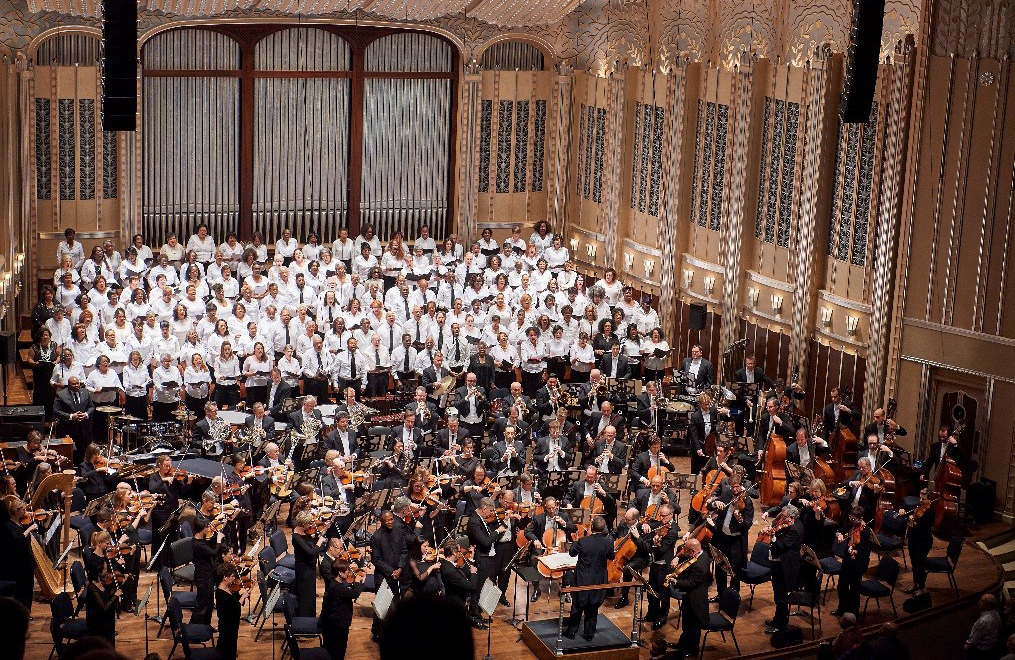 In addition to leading performances like the MLK event, Vinay Parameswaren’s responsibilities as assistant conductor take him in several directions, “some that they didn’t teach you at Curtis,” he said. One of those is matching live music to film, and by now, he has gained a lot of experience with that format both at his former job as assistant in Nashville and while guest conducting elsewhere. “Once you figure out how the technology works, it’s a lot of fun. The music is great, the orchestra enjoys playing it, and the movies are usually iconic.

“It can feel like an unending sprint, because you have to know the movie as well as you would know a symphony by Bruckner or Mahler,” he said. “I’ll never forget the first time I conducted Star Wars. ‘OK, this thing is going to blow up here, and that has to be precisely coordinated with the music’ — something you’d never think of when preparing for a regular classical concert.”

The conductor also believes that the film concerts are a great way to introduce new audiences to the orchestra. “You get to hear the orchestra in its full capacity, and I’ve met patrons who ended up going to a subscription concert after attending a film night. I think there are a lot of positives there.”

Parameswaren also has the responsibility of leading the Cleveland Orchestra Youth Orchestra, which began its season last fall with first-year players in half of its seats. Since there were so many new faces in the string section, he approached the opening concert with some trepidation. “But they really came through and delivered the goods. We just started rehearsing Firebird for our second concert.”

Like his former boss in Nashville, Giancarlo Guerrero, and his immediate predecessor in Cleveland, Brett Mitchell, Vinay Parameswaren began his musical career as a percussionist. And like previous assistant conductors Alan Gilbert and Christopher Wilkins, he took his first degree at an Ivy League school. I asked him how that educational experience had affected his training as a conductor.

“I wasn’t ready to go to music school when I was 17 — I thought I might want to go to law school or do political work — but I’m really happy I had the experience I did at Brown. Those four years were really formative in my growth as a person and a thinker. A career as a conductor really demands much more than just on-the-podium skills. And I learned so much from literature classes and science. It just shapes your creativity. Knowing theory and counterpoint is essential, of course, but also the other students and professors were influential.”

Parameswaren eventually got interested in conducting. “Percussionists have a lot of time to watch conductors,” he said. “I went to the director of orchestras for advice on how to pursue this. He took me on as a private student, so I was going to his house every week to learn score reading, transpositions, and clefs. We started by reading Bach chorales at the piano in open score. Then he threw me in front of the University Orchestra. I had absolutely no idea what I was doing — I was 19 years old. Thankfully, they were my friends, so it was OK to fail in front of them. So in many ways, going to Brown before Curtis changed my life.”

The conductor thinks his life as a percussionist was a great way to absorb all the sounds, colors, and possibilities of the symphony orchestra. “You become aware of listening for cues rather than just counting hundreds of bars of rest. It’s no wonder that a lot of people start out in the back of the ensemble and end up in the front.”

All free tickets to the January 12 concert have already been distributed, but the 7:00 pm concert will be broadcast live on Ideastream, WCPN  90.3 FM and WCLV 104.9 FM.

END_OF_DOCUMENT_TOKEN_TO_BE_REPLACED

Composer John Harbison has done it all. His numerous awards include a MacArthur Fellowship and a Pulitzer Prize. He has written works for many of America’s leading musical organizations and has served as composer in residence with the Pittsburgh Symphony and the Los Angeles Philharmonic. His catalogue includes three operas, seven symphonies, twelve concerti, a ballet, six string quartets, numerous chamber works, and a large body of sacred music. On her latest CD, Late Air — Music by John Harbison, soprano and Oberlin voice professor Kendra Colton reminds us that the celebrated composer has a special talent for writing art songs — she also proves herself to be a sensitive interpreter of them. END_OF_DOCUMENT_TOKEN_TO_BE_REPLACED

END_OF_DOCUMENT_TOKEN_TO_BE_REPLACED

We begin with the world premiere recording of Okeanos, Bernd Richard Deutsch’s concerto for organ and orchestra, featuring Paul Jacobs as soloist. The title refers not only to the Titan of Greek mythology, but also “to an idea of immense (and sometimes unfathomable) greatness and breadth, which conjures up in my mind the thought of the organ,” as Deutsch writes in his notes. END_OF_DOCUMENT_TOKEN_TO_BE_REPLACED