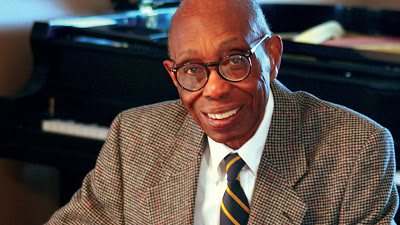 On Saturday, November 1 at 8:00 pm in Finney Chapel, guest violinist Gregory Walker will join the Oberlin Orchestra under the direction of Raphael Jiménez in a performance of George Walker’s Poème for violin and orchestra. The concert also includes Sibelius’s Symphony No. 2.

Gregory Walker is the son of Pulitzer Prize-winning composer and Oberlin alum George Walker (left), whose Poème for violin and orchestra was premiered in 1991 by Cho-Liang Lin. Gregory Walker admits that he had been in awe of the piece for some time before he actually dug into learning it. “It wasn’t until I had the opportunity to perform it with Ed London and the Cleveland Chamber Symphony that I really learned the piece,” Gregory Walker told us during a recent telephone conversation. “It’s very transparent due in large part to the orchestration. At times it has an introverted quality.”

Walker also recorded the work with the Cleveland Chamber Symphony for Albany Records in 1998 and said that he looks forward to performing his father’s composition in Oberlin this Saturday. “While I’m fairly immersed in my father’s work, the opportunity to play any one of his pieces is always an event. There are one or two of his pieces that do come up more often, but they are chamber works like the first violin sonata. So performing this work will be very special.”

The prolific career of violinist/composer/educator Gregory Walker is full of musical curiosities. With degrees in Music, English, Computer Music, and Composition, Walker has performed solo synthesizer concerts throughout California and premiered his Concerto No. 1 for Orchestra and Synthesizer with the Oakland Sinfonietta. In 1993, the Colorado Symphony commissioned Walker to compose what was acclaimed as the first “rap symphony,” Dream N. the Hood. In 2009, he debuted a new laptop multimedia instrument during the California premiere of Looking for the Perfect Planet for Amplified Chorus and Video Sampler at the Golden Gate Festival. That same year he played the world-premiere of George Walker’s Violin Concerto with the Philadelphia Orchestra. 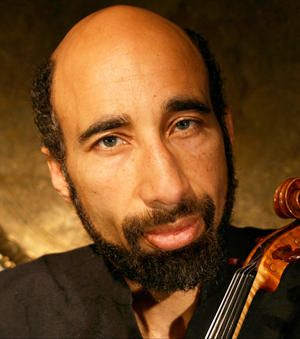 Although you could easily focus your attention on Walker’s “classical” career, that would mean ignoring the essence of who he is as a musician. For example if you visit his website you are met with the phrase “The avantclassical violinist.” “I think the avant-garde reference is not fully accurate,” he said with a laugh. “Nowadays players who are exposed to a wide variety of musical idioms are rarely going to dedicate themselves just to the truly experimental works,” he explained. “But just embracing the variety of styles and the new technologies that a string player has access to, you no longer have one discrete style but a synthesis of styles. It certainly comes from classical roots and classical training, but the effect comes across as unique and sometimes cutting edge.” Walker cites his version of Vivaldi’s Four Seasons as one example of this musical synthesis. “I’m playing it on an electric violin, but also using added electronics.” A more subtle example is his performance of Mozart’s 5th Violin Concerto with improvised cadenzas.

During the past few years, Walker has also expanded into the jazz world. “The first Jazzical Violin program was made up of classical music that pulled in jazz influences — like Gershwin and Ravel. Then I also took a crack at Latin Jazz standards that I felt I could add some improvisation to. Even more recently I’ve started working with some Gypsy Jazz groups in Colorado. That was when I really got to hang out with jazz guys on their own turf. And that was very sobering, so I take my hat off to anybody who plays jazz.”

Is his need to create these musical syntheses based in a need to get beyond the often-perceived conservatism of classical music? “Given my temperament, I am kind of sensitive to conservative aspects of classical music. But, if you were to keep track of my activities for a year, you’d see that I do play both sides of the field on this one. Yes, there are plenty of times when I’m working with respectable orchestras and organizations, and I will bring in elements that are non-traditional, or even a little bit blasphemous. For example, adding electronic techno music to a Vivaldi guitar concerto. But during my training at schools that specialize in electronic and computer music, I would also bring in the classical esthetic — traditional music and instruments, and at times, even writing in sonata-allegro form. So in that environment I was actually the old school guy. But I think the important thing is to introduce new things to the table, which I think contemporary audiences are ready for because that is what they experience in their daily lives.”

When not performing or composing, Gregory Walker teaches in the College of Arts and Media at the University of Colorado Denver. How does teaching influence his own music? “The interesting thing is that I teach in what they call the Department of Music and Entertainment Industry Studies. So even though the school offers the typical classical training, they pride themselves on the pop style, starting with jazz but expanding into audio engineering, music business, rock styles and even DJ and hip-hop. So when I teach, I am aware that most of these students do not come from the background that I came from. Many of them look at the classical style as a foreign language, so I feel like I have to draw them in. And I think this same thing plays out when I am performing for most audiences.”

In short, Walker thinks it’s all about being inclusive. “There have been times in the history of Western music when it was more inclusive than others, so you have to choose what makes sense for your epoch. In the case of my dad and his music, I see somebody who is the epitome of a serious artist — someone who is completely uncompromising. And I think that for those of us who perform his music, in some ways we have to be the ones who present the compromise. We have to be able to create that bridge to where he is for the students and audiences.”