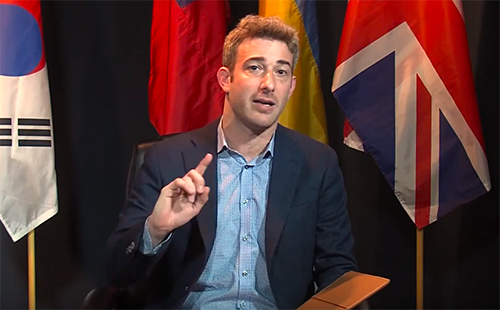 International piano competitions normally take place in real time in a single location. But when SARS-CoV-2 forced Piano Cleveland to postpone its Cleveland International Piano Competition until 2021, the organization decided to hold an online contest in its place.

Thus 30 pianists, chosen to compete in Virtu(al)oso out of a field of 130 applicants, turned up at Steinway locations in Cleveland, New York, London, Hamburg and Beijing, each to video record a 20-minute and a 30- to 35-minute program of music of their choice. There were no repertoire hoops to jump through: the only stipulation was that pieces be in contrasting styles. And to guarantee fair comparisons, visual and sonic values were to be standardized among the five recording venues.

Then during six First Round sessions beginning on July 30, the recordings of five pianists would be streamed each evening, to be vetted by a jury watching remotely on their own screens. Six pianists would be chosen to move on to the Final Round on August 7 and 8.

It must have felt strange to “compete” in advance with no audience present — perhaps as strange as it felt for viewers to pretend that pianists’ sessions were taking place in the here and now — but then everything has seemed odd since mid-March.

Each session was introduced by Piano Cleveland President Yaron Kohlberg and included a 5-minute intermission followed by a cameo with one of the jury members and a chat with guest host Zsolt Bognár.

Contestants preceded their rounds with brief spoken introductions, mostly informal, some recorded in their bedrooms on smart phones. Happily for those of us who have been conducting business on Zoom for the past four months, no unwitting family members ventured into the scene, and no cats decided to send emails while the pianists were talking. Here are brief first impressions of 30 pianists, admittedly formed under the extenuating circumstances of 20-minute internet videos.

Josquin Otal (27, France) demonstrated careful voicing and a light touch in selections by Brahms and Rachmaninoff, and juxtaposed rumbling bass figures with gauzy textures in Scriabin’s unsettled Sonata No. 5.

Roman Kosyakov (27, Russia) gently voiced a Scarlatti Sonata and a pair of Rachmaninoff Preludes, saving his energy for an exciting finale — the Fugue to the Barber Sonata — clear, accurate, and under complete control.

Xiaoya Wan (20, China) played Scarlatti a bit mechanically, saving drama for Prokofiev’s Sarcasms, which were well-paced but might have even sounded more biting in tone.

Lin Ye (28, China) performed both Rachmaninoff and Beethoven with bright tone and dry articulation. A Chopin Scherzo needed more of a sense of line, even in the chorales.

Francesco Granata (21, Italy) made his way through a Bach prelude and fugue rather cautiously and took Ravel’s dynamic markings and pedalings in two movements from Miroirs merely as suggestions.

The third session began with a serious technical glitch. Viewed on Cleveland Piano’s website, the sound arrived several seconds ahead of the video. I ended up watching on the YouTube platform.

Lovre Marusic (27, Croatia) led off with a Haydn Sonata, playing with great intensity, hunched over the keyboard. Balances between the hands affected Scriabin’s Sonata No. 2, and his phrasing wasn’t quite what the composer wrote in the score (Marusic also ignored important rests in the penultimate bar).

Tamila Salimdjanova (28, Uzbekistan) gave an elegant and understated reading of a Haydn Sonata, and brought expressive rubato and clean right-hand octaves to bear on a Chopin Ballade (she should check the score to verify the composer’s dynamics and other details like rests).

Arseniy Gusev (21, Russia) curated a serious set that included a carefully voiced Schönberg piece from Op. 11, a dramatic and dark-toned Schubert Sonata movement, and a brisk Bach Fantasia and Fugue that might have turned frantic if he hadn’t held it in such tight control.

Mariia Narodytska (32, Ukraine) chose four works that showed her talents in high relief. Scarlatti Sonatas were carefully voiced, nimble, and delightful. Her own toccata-like Musical Moment built to a thrilling, double-octave climax, then dissolved into high, light textures, providing the perfect transition into a breathtaking enactment of Lizst’s first Mephisto Waltz. Norodytska has the knack of making Liszt’s music sound better than it is.

Sergey Belyavskiy (26, Russia) closed the session with engaging performances of Albéniz, Taneyev, and Liszt, barely moving his body but creating evocative music with assured technique. In La Campanella, filigree seemed unrelated to the rest of the texture, and Kapustin’s “Intermezzo” needed a slower tempo and more swing to achieve the barroom stride piano feeling the composer had in mind.

Andrei Iliushkin (25, Russia) played the improvisatory sections of Bach’s Chromatic Fantasy rather dismissively, but — his hands never leaving the keyboard — brought a quiet, controlled sensitivity to the fugal passages. In keeping with its subject, he approached Janacek’s Sonata 1.X.1905 with solemnity, excellent pacing, and careful dynamics.

Byeol Kim (31 , South Korea) gave Debussy’s slow waltz, La plus que lent, a hushed performance with warm tone and nice rubato. A Scarlatti Sonata made a strong contrast with robust articulations and sharp releases at the end of scales. Liszt’s 13th Hungarian Rhapsody was unusually clean under her fingers.

Jonas Aumiller (22, Germany) gave a pianist’s take on a pianist’s arrangement —  Busoni’s reworking of Bach’s D-Major organ Prelude and Fugue — slow and noble in the Prelude, then fleet and festive in the fugue. Scriabin and Rachmaninoff pieces that followed shared similar styles. Aumiller deftly negotiated their complex textures, favoring the bass register at the expense of right hand melodies in some sections.

Priscila Navarro (26, Peru/Canada) leaned heavily on the sustaining pedal in a Bach Fantasy and Fugue, but brought a welcome and distinctly Latin sensibility to two movements from Albéniz’ Iberla.

Abuzar Manafzade (30, Azerbaijan) took a heavy-handed approach to Liszt’s arrangement of Bach’s A-Minor organ Prelude and Fugue, blurring the texture with pedal and beginning the fugue sotto voce. A Rachmaninoff Etude-Tableau was as ponderous as the March from Prokofiev’s Love for Three Oranges was light, clear, and steady.

Michael Lu (21, United States), producing a warm, enveloping tone, led off with a classy reading of a Schubert Impromptu, then turned to a rarity: Florence Price’s Cotton Dance (Presto). That cheerful piece made a splendid lead-in for the barn-burner of his set: Schumann’s ligament-destroying Toccata, in the face of whose demands he remained calm and collected.

Michael Davidman (23, United States) gave a light, flawless, expertly-voiced performance of a Bach Prelude and Fugue, following that with a full-toned, well-balanced account of the first movement of Chopin’s Third Sonata with exciting strettos. He played Granados’ Los Requiebros with an easy, lyrical flair.

Ending the session and the First Round, Martin James Bartlett (24, United Kingdom) constructed and delivered an engaging playlist. The Rondeau and Capriccio from Bach’s C-minor Partita were fast, witty, and stylish. The first movement of Mozart’s K. 332 Sonata was understated, with shapely tunes, quick mood changes, and good arrival points. Liszt’s arrangement of Schumann’s Widmung was charmingly lyrical, and as it’s often called to do, Rachmaninoff’s Polka de W.R. made the perfect encore.

Northeast Ohio’s Les Délices has long been that rarest of beasts: a world-class organization so proud of its region (ours) and repertoire (distinct niches in pre-1800 music) that it never tries to be everything to everyone, paradoxically making a strong case for a broad, curious international following. In the December episode of its SalonEra series, the ensemble embraces its strengths and community to marvelous effect. END_OF_DOCUMENT_TOKEN_TO_BE_REPLACED

END_OF_DOCUMENT_TOKEN_TO_BE_REPLACED

Another I remember fondly is Gian Carlo Menotti’s Amahl and the Night Visitors.  Commissioned by NBC, the one act, made-for-television opera, premiered on December 24, 1951, at the network’s studios in New York’s Rockefeller Center. And now, through the wonders of technology, Cleveland Opera Theater has created a magical new production of the work which is available on demand through January 6, 2021 (Three Kings Day). END_OF_DOCUMENT_TOKEN_TO_BE_REPLACED

Jessen has now followed up with her second solo CD, Winter Chapel. Recorded on January 17, 2020 in Oberlin College’s Fairchild Chapel and available on Carrier Records, the album is a continuum in Jessen’s journey to push the musical boundaries of her instrument and herself as an improviser. END_OF_DOCUMENT_TOKEN_TO_BE_REPLACED