After weathering the forced sabbatical of the pandemic, during which VOCES8 launched a series of intriguing online events, things are gradually returning to something approaching normal for the ensemble. “We’re about twenty live concerts into the season now, with a smattering of performances this summer in the U.K. Of course, we’re taking all the extra precautions and testing like crazy, but it’s a joy to be back,” Smith said.

VOCES8’s Akron program is titled “Choral Dances,” and the introduction in the printed program reads:

Since the first music was created, music and dance have been constantly entwined. From chapels and courts to cinemas and clubs, this program rejoices in choral music inspired by dance. Juxtaposing Renaissance music with jazz and pop creates a rare mix of the ethereal and angelic, along with pure foot-tapping fun: a showcase for VOCES8’s inimitable stage presence.

That partially accounts for the co-existence of William Byrd and Irving Berlin, of Thomas Weelkes and Jerome Kern in the same performance, but Barnaby Smith offers another explanation for the wide range of repertoire the audience will hear on October 19.

“Our mantra is to take our interests as an ensemble and convey them to the audience. With the exception of our one American member, we’ve all grown up in the English choral tradition singing everything from Renaissance polyphony to contemporary works. That’s sort of in our blood. Alongside that, we’ve all grown up listening to some of the great a cappella groups. So when we give a concert, we try to meld all of this in.” 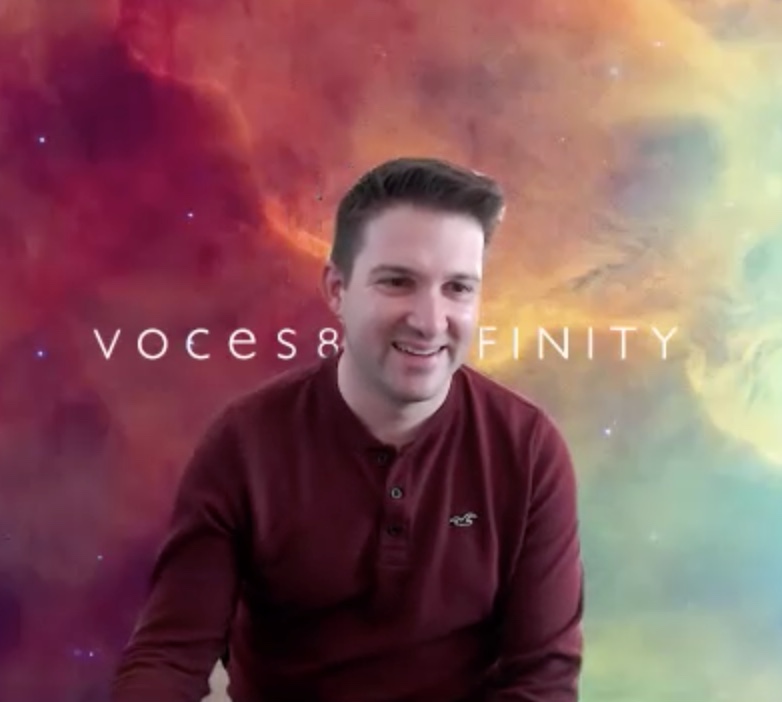 Smith thinks that can lead to a fruitful cross-fertilization. “A lot of people might buy a ticket because they want to hear Renaissance polyphony, and when they see jazz on the program, say ‘Oh god, I guess I’ll just have to suffer it’ — but they end up really enjoying it.

“Or vice versa. Some people come because they love the folk, pop, and jazz end of what we do, and then they’re really surprised how much they enjoy the Renaissance polyphony. It’s a fabulous way of opening up our wonderful choral art across many genres to lots of different people.”

This particular program was suggested by a festival in Nantes, France in which VOCES8 participates every year, and which always organizes some 300, 45-minute concerts around a theme. Because VOCES8 had been looking for a way to program Benjamin Britten’s Choral Dances from “Gloriana,” the theme of Dance one year presented the perfect opportunity.

That being said, pieces like Palestrina’s Magnificat Primi Toni are more difficult to tuck under that theme, which prompted Barnaby Smith to expand on his philosophy of program design.

“I do the group’s programming, and while it’s nice to create a cohesive arc that unites all the elements of a concert, one of VOCES8’s themes might just be, ‘We’re going to sing you some nice music you’re going to enjoy.’”

Smith notes that while Palestrina wrote 40 Magnificat settings, only this one is in a Venetian rather than a pious Roman style. “Its carnival atmosphere makes it one of the most energetic pieces on the program.

“Similarly, an excerpt from the Rachmaninoff All-Night Vespers gives the audience an opportunity to be introspective and experience the power of music for its healing qualities. It also contains some of the softest and loudest singing of the evening. And a simple Icelandic piece functions like a sorbet, giving the idea of how beautiful a pure, four-part texture can be.”

The repertoire also ventures into a few indelicate themes. “Thomas Weelkes’ As Vesta was from Latmos Hill Descending is from The Triumphs of Oriana, 25 pieces by 23 composers in homage to Elizabeth I, all of which have double meanings. And the text of Orlando Lasso’s Dessus le Marché D’Arras is possibly the lewdest on the program.”

Many of VOCES8’s pop arrangements are by Jim Clements, a university friend Smith describes as a genius. Filling out the program, Berlin’s Cheek to Cheek and Kern’s I Won’t Dance will share the stage with Ward Swingle’s version of a Bach Bourée in one of the most varied programs you’re likely to hear this season.

END_OF_DOCUMENT_TOKEN_TO_BE_REPLACED

Rodgers & Hammerstein’s Cinderella was originally produced for television in 1957 — seven years after the animated Disney film was released — and starred Julie Andrews. According to the Rodgers & Hammerstein website, it was viewed by over 100 million people. END_OF_DOCUMENT_TOKEN_TO_BE_REPLACED

The story line has its origin in an 1855 play and an 1842 farce that Thornton Wilder mined for his 1938 play The Merchant of Yonkers. When that turned out to be a flop, in 1954 Wilder made the crucial decision to re-center the show around the character of the legendary marriage broker Dolly Gallagher Levi and renamed it The Matchmaker. END_OF_DOCUMENT_TOKEN_TO_BE_REPLACED

The Dodero Center for the Performing Arts at the Gilmore Academy in Gates Mills is one feature of an impressive campus. The auditorium is shallow, the stage is deep, and the ensemble played without a shell. Throughout the program, the sound, especially in instruments’ lower registers, tended to disappear. END_OF_DOCUMENT_TOKEN_TO_BE_REPLACED