Since The Cleveland Orchestra’s In Focus programs run about an hour each, it seems odd to label Alisa Weilerstein’s program of J.S. Bach’s six solo cello suites — three hours’ worth of music and commentary — merely as a “bonus” episode. Whatever the packaging, her recordings from Severance Hall that debuted on the Adella platform on February 18 add yet another distinguished set of performances to the many we’ve been able to enjoy over the years — and especially during the early days of COVID-19, when streaming performances of the Suites became something of a cottage industry among quarantining cellists.

Weilerstein is a Cleveland native who played in the Cleveland Orchestra Youth Orchestra, prepped at the Cleveland Institute of Music with Richard Weiss, spent countless hours in a local practice room she showed us, and regards the Bach Suites as “music that speaks in the most direct way possible to everybody,” but also as “music that evolves with us.” She made her first recording of this repertoire last year at the age of 37, but also believes that to record a Bach Suite is only to capture a snapshot of a moment in time.

The moments preserved in the In Focus videos may be subject to interpretive changes in the future as Weilerstein’s relationship with the music continues to evolve, but they seem right now to be as mature and well thought out as we have come to expect from this artist, who brings passion and deep insight to everything she touches.

In one of her several introductory mini-interviews, Weilerstein notes that with no dynamic markings and no autograph manuscript, “you can do infinite things with this music,” but she likes to think of them as descriptions of life stages, ranging from the naïve optimism of youth through the anxiety of adolescence to a kind of regal wisdom. She finds tragedy and unbearable loneliness in the scordatura suite, with its single-line Sarabande. 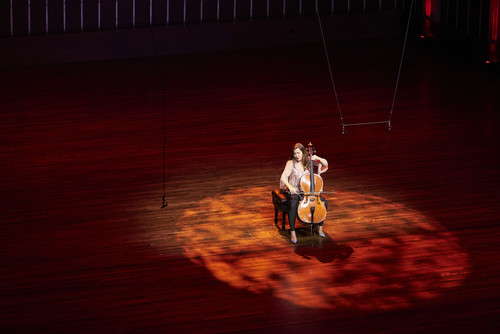 The idea of aloneness is at the core of the six suites — imagine a lonelier scenario than a cellist all by herself on an empty symphonic stage. Sometimes you feel that your presence as a listener may be invading the privacy of that solitary musician, engaged in an intense conversation with the music itself.

These are among the fleeting thoughts that may pass through a listener’s mind during such masterful performances. Issues of playing style and details of articulation and ornamentation can fall by the wayside as a performer reveals profound personal truths.

If you expected Alisa Weilerstein the cellist to take a robust Romantic approach to these pieces, and to play with flawless intonation and impressive technique, you wouldn’t have been disappointed. More importantly, in the course of this gripping marathon, you got to know much more about Alisa Weilerstein the human being.

END_OF_DOCUMENT_TOKEN_TO_BE_REPLACED

The strings-only work by Berg has made relatively frequent appearances on the Orchestra’s programs. In 2021, the musicians recorded it for the In Focus series, and it appeared again on last year’s European tour. Friday’s rendition maintained the group’s characteristic light and effortless playing, each section blending as much as possible to echo the work’s original form as a string quartet. At fifteen minutes total, the piece is quite short, but the dense encoded musical meanings require some extra-attentive listening. Splitting up the three movements ensured that each one could be appreciated on its own. END_OF_DOCUMENT_TOKEN_TO_BE_REPLACED