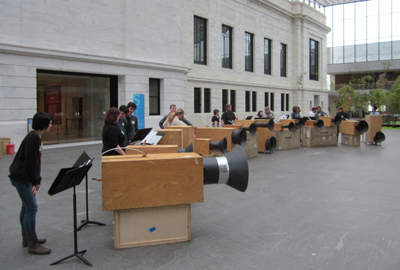 One person’s music is another’s noise. On Friday, January 16 in Gartner Auditorium at the Cleveland Museum of Art, Italian musicologist, composer and musician Luciano Chessa led a fascinating and brilliantly programmed concert by the “Orchestra of Future Noise Intoners” or “Intonarumori,” which challenged listeners to hear the musical possibilities that can be found in noise.

The Intonarumori were first realized in 1913 by the Italian painter and forward-thinker Luigi Russolo. In his Futurist Manifesto, L’arte dei rumori (The Art of Noises) Russolo summarizes the evolution of Western music and arrives at a radical conclusion:

Ancient life was all silence. In the 19th Century, with the invention of machines, Noise was born. Today, Noise is triumphant and reigns sovereign over the sensibility of men…As it grows ever more complicated today, musical art seeks out combinations more dissonant, stranger, and harsher for the ear. Thus, it comes ever closer to the noise-sound…We must break out of the limited circle of sounds [of the orchestra] and conquer the infinite variety of noise-sounds.

To accomplish this, Russolo developed the “Intonarumori,” which consists of sixteen wooden, hand-cranked sound boxes with conical metal speakers. The instruments were first unveiled during a concert for the Press at Milan’s Futurist headquarters, the Casa Rossa in Milan, on August 11, 1913.

The orchestra itself consists of eight families of intoners, two of which have three members that produce high, medium and low sounds. Four families produce high and low sounds and two families produce only low sounds. The instruments also produce a variety of timbres. For example the Stropicciator (a.k.a. Scrapers) sounds like metallic surfaces rubbing against each other, while the Gorgogliatori (a.k.a. Gurglers) produces the sound of water trickling through the pipes or rain gutters.

The concert included six works dating from the 21st century, two of which were premieres, as well as the sole surviving fragment of a piece by Russolo. Performers included the University of Maine at Farmington’s Experimental Arts Ensemble (Gustavo Aguilar, director), plus seven Cleveland area musicians, with Luciano Chessa as conductor. Chessa also displayed his talents as an orator during two recitations of Futurist sound poetry.

Because most of the music originally written for the instruments has been lost — besides the Russolo fragment, the only work not from this century was a 1916 composition by Paolo Buzzi — it was interesting to hear how today’s composers approached writing for the instruments. Musically speaking the concert felt very much in the here and now.

The stand out composition of the evening was the premiere of Christopher Burns’s Three Standard Stoppages (2014). Burns, who was present for the performance, has created an extremely interesting work that juxtaposes the 1913 technology with what is perhaps the most commonly used technology of today: the iPhone. Each performer’s phone was equipped with an app that produced ring tones, which melded into the sounds of the Intoners. Later in the piece, the players recited text messages, each with a distinct rhythmic structure. The results were mesmerizing.

However, credit for the success of the evening has to be given to Luciano Chessa for creating a 60-minute program of diverse compositional styles composed for full orchestra, sextets, and quartets. His theatrical poetry readings, combined with inventive stage lighting, made for an enjoyable and enlightening evening of music-making.

Following the performance CMA’s director of Performing Arts, Tom Welsh, and Chessa discussed the program as well as the inspiration for the Reconstruction of the Intonarumori (the original instruments were lost during World War II) for the Performa 2009 Biennial in San Francisco, which marked the centennial of Italian Futurism. It was nice to see that, rather than get up and leave, so many of the fairly large audience decided to stay and learn more about the instruments and Italian Futurism.

Music director and conductor Daniel Meyer built his playlist around Cleveland themes and scenes. “Exploration CLE” made use of engaging selections from the classical canon and beyond that celebrated “what makes Cleveland so special.” Happily, he and his musicians avoided constructing a visual slide show, choosing to let the music speak for itself. END_OF_DOCUMENT_TOKEN_TO_BE_REPLACED

You could see the relationship at work on a practical level. Repertoire for two players at the same piano requires a certain choreography. There’s just one of each pedal to share, and the hand crossings left and right — which can be so fun to watch a soloist pull off — get more complicated when another person’s involved. At times, Pompa-Baldi drew a hand away from the keyboard and into his body, making room for Friscioni, and at the close of a few delicate phrases, the two were crouched together over the same final notes at one end of the instrument. END_OF_DOCUMENT_TOKEN_TO_BE_REPLACED

The signature sounds of these famous film scores are not so much John Williams’ invention as allusions to other classical pieces. The foreboding half-step from Jaws, growing more and more furious in the cellos and basses, shares something with Dvořák’s “New World” Symphony and Bartok’s Miraculous Mandarin. END_OF_DOCUMENT_TOKEN_TO_BE_REPLACED