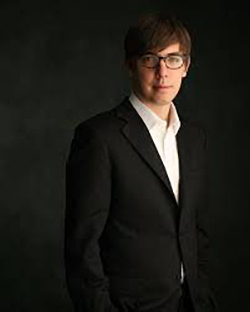 First, an introduction to the young yet already globetrotting conductor, who recently made his first appearance with the LA Philharmonic. His 2014 debut on the podium — when he emerged from behind the timpani of the Orchestre Philharmonique de Radio France to step in for not one, but two ill conductors — is a story to tell the grandchildren. The percussionist had been studying conducting privately with Esa-Pekka Salonen, among others. With that, I’ll pass the mic to the Frenchman for the details.

“What happened is that I got a call a couple hours before the first rehearsal for the concert saying that Lionel Bringuier — who incidentally became a good friend — was sick, and asking if I could I just take that rehearsal. ‘OK sure, I’ll do it.’ The next day Mikko Franck was supposed to take over, but before the rehearsal the phone rang again. ‘He’s not going to be there, can you do it?’ I said, ‘OK sure.’ When I got to the rehearsal, the manager finally asked me to take over the whole week, since I’d been working with the orchestra and we were already on board with shooting an educational concert and DVD the same week. So it was not just one concert at stake.”

What was it like to stand before his friends and peers in the orchestra? “That was of course a new thing back then,” Perruchon said. “But still today, with any French orchestra I conduct, there’s a chance that my schoolmates are there, as well as my teachers and a lot of musicians that I know from here and there — France is a small country. But it’s a little more special when it’s your own orchestra, because there are more personal connections.”

That brought us to a larger, more historical topic: the relationship between conductors and players. “Most of the conductors nowadays really try to be accessible to the musicians, which was not necessarily the case in the first half of the 20th century,” Perruchon said. “I think that’s also a reason why we have more and more young conductors emerging on the international stage, and also more people like myself who come from within the ranks of the orchestra in a very natural way. The relationship can vary from country to country and from place to place — it can be very specific — but the general working atmosphere of orchestras has become more collegial, which I think is a good thing.”

Getting back to Saturday’s performance, Perruchon said he’s wanted to program Copland’s Statements for some time. It’s a piece he finds especially interesting because it came right at the verge of Copland’s embrace of populist styles. “Statements has its own world to me, as opposed to the later, more famous pieces.”

Something clicked in the conductor’s mind when he realized that Statements was completed in 1935, the same year Orff was writing Carmina Burana. “I started thinking about how different — especially in those years — the worlds of Orff and Copland would have been, and what it meant to be a composer. Musically, they’re so far apart.”

But the more Perruchon thought about it, the more he found similarities in their approach and careers. “Just like Copland went into this populist style in order to reach a larger public, that’s also what Orff achieved, especially with Carmina Burana. Both of them were very keen educators as well. Copland supported a whole generation of composers that came after him, and Orff was developing all these methods for youth learning music.”

Another common thread: global politics. “Orff’s position during WWII is not clear,” Perruchon said. “If anything, he confessed to being passive, which is a crime of which many a citizen would have been guilty in all of our European countries during the war years. And his music was praised by the regime — he was able to continue working and stayed in Germany, which some others didn’t.”

In the ‘50s, Copland was a target of Joseph McCarthy’s investigations of Communism in the U.S. during the Red Scare. To Perruchon, glimpses of Copland’s political outlook can be gleaned from Statements, like in what he calls the overly grotesque fanfare of “Jingo” and the spirit of rebellion in other movements. “I think Copland was seeing where the world was headed, and it’s stated very eloquently in this piece.”

The cimbalom was the feature of the show, an instrument capable of taking on many personas. Its performer, Chester Englander, has shaped his career around the instrument, and has inspired composers to write more repertoire for it, some of which was presented on the program. END_OF_DOCUMENT_TOKEN_TO_BE_REPLACED

You wouldn’t expect that acoustic from a glance at the nave, which is wide and long, but not especially lofty. But when I guest conducted a local amateur choir and professional orchestra in Beethoven’s Mass in C there a few years back, during the first rehearsal we released the final chord of the “Gloria” and listened in astonishment for the next several seconds. The sound continued to roll down the space like the big wave that surfers dream about. END_OF_DOCUMENT_TOKEN_TO_BE_REPLACED