The history of classical music sometimes borders on mythology. The music on the Akron Symphony’s Saturday, February 22 program has taken on this fabled, quasi-historical quality — Mozart’s Requiem, Schubert’s “Unfinished” Symphony, and Beethoven’s over-finished Leonore Overture No. 3. Fortunately, in performance the music more than lived up to the story.

Thanks to Amadeus, the basic facts around the Requiem (fraught for the composer to write, unfinished at the time of his death) are popular knowledge. It’s come at the expense of some history, but hearing a bit of cloak and dagger in the drama of Mozart’s music is not entirely unwarranted.

However fine the soloists, it’s really the chorus’s show. Loud, imposing moments, like the choir’s unison “Rex,” fared better than cheerful contrapuntal music (the “Hosanna” that closes both the Sanctus and Benedictus movements). The trombone section, playing alto, tenor, and bass instruments, was outstanding at every entrance, from the fugal writing in the Kyrie to the tenor trombone solo in the Tuba mirum.

Mozart’s Requiem is punctuated by more than a dozen movement breaks, a challenge for any interpretation. Music director Christopher Wilkins paced the piece well, making some standard choices that bring out the most famous music: segueing straight into the Dies irae, carving out space around the Lacrimosa. The result was a circular whole, with the Sequenz a highpoint and the repeat of the opening material at the end a fitting conclusion. 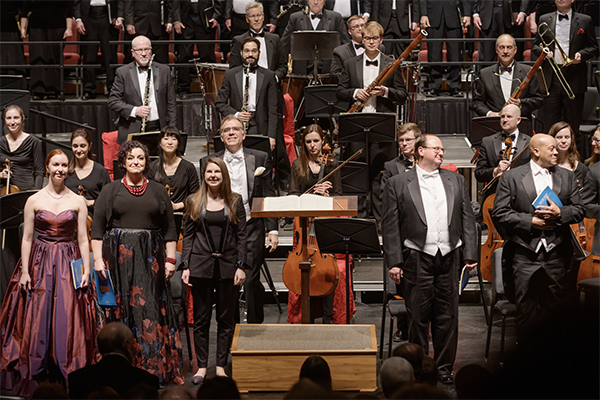 For something truly unfinished, the orchestra featured Schubert’s Eighth Symphony on the first half of the program. Another work whose history almost dwarfs its music, its moniker, “Unfinished,” is at once concise and misleading. Since its premiere, the symphony has been taken as emblematic of the composer’s short, melancholy career, despite the fact that Schubert, less glamorously, had a habit of leaving compositions incomplete, including another symphony.

In performance, the poignancy of the Eighth Symphony speaks for itself. Wilkins led an interpretation that was appropriately light to the touch. The first movement’s two themes — a plaintive melody in the oboe and clarinet and a far cheerier one in the cellos — got the same unaffected treatment, suitable to the general mood. And for the listener caught up in the dramatic arc of the music, the lack of a third and fourth movement registers as a sad, maybe inevitable transgression of form.

Beethoven’s Leonore Overture No. 3, which opened the concert, sticks to form, though that’s the source of its own outsized history. One of four overtures Beethoven wrote for his opera Fidelio (and not the one used today), it’s had a second life in the concert hall, which better suits its symphonic proportions. Wilkins and the Akron Symphony gave it a studied reading, though they let loose for the grandiose final measures.