Programming a concert is like working out a puzzle. And if one of the pieces is Mahler’s Symphony No. 5, a better comparison might be a Rubik’s Cube.

“It’s challenging to program the Fifth Symphony because it’s 70 minutes, so that could be a full evening,” Akron Symphony music director Christopher Wilkins said during a phone call. “But I think most conductors are reluctant to just open the doors, let people get settled in their seats, and boom — have 70 minutes of music. It’s of course tough for latecomers. And the first and second movements are meant to be played without pause, so you don’t even get to relax until you’re a good twenty-plus minutes into the piece.”

How about starting with a short piece? That’s worse. Either the audience gets an oddly early intermission, or they have to sit still for maybe an hour and a half.

For the Akron Symphony’s concert this Saturday, January 18 at 8:00 pm at E.J. Thomas Hall, Wilkins has opted to precede Mahler’s Fifth with a pair of short pieces: Mozart’s Overture to The Marriage of Figaro and Wagner’s Prelude to Tristan and Isolde. In a way, all three works are about love — but more on that later.

Mozart and Wagner, plus a few remarks from the stage, feels like enough for Wilkins to justify a short intermission. “And then,” he said, “I think people will really be ready to hear the Mahler.”

Mahler 5 comes square in the middle of his nine finished symphonies. Wilkins noted that it’s also “personally central” to the composer. For one, the Adagietto movement (made famous in Visconti’s 1971 film Death in Venice) is presumed to have been dedicated to Alma Schindler, whom he married in 1902, the same year he finished the symphony.

The Fifth also looks back on some of Mahler’s previous work. “The trumpet fanfare that begins the whole piece appears in the Fourth Symphony,” Wilkins said. “It’s a direct quote.” He also noted that unlike many of Mahler’s other symphonies, this is a traditional one, at least in the sense that it’s purely instrumental.

“At the same time, it cuts a new path and starts to push us toward late Mahler and the 20th-century language that Schoenberg in particular admired so much,” Wilkins said. “Mahler confessed to having really struggled with how to realize the newness of his musical vision. He revised the Fifth more than any other symphony, and continued to revise it throughout his life, mostly in terms of trying to achieve ultra clarity.”

Wilkins said “one of the great ironies” is that Mahler used an enormous orchestra like it was a chamber orchestra. “There are minimal doublings, and the instruments are all like soloists.” Fans of brass, take note: “It’s really the first symphony where the brass are pretty fully liberated.”

Wilkins called the orchestration groundbreaking. “It’s a marvel, and even to this day, it’s such a pleasure to live with what he was able to pull out of an orchestra.” Players, he said, always “get up” for this repertoire, “and I think audiences feel the excitement that the orchestra experiences.” 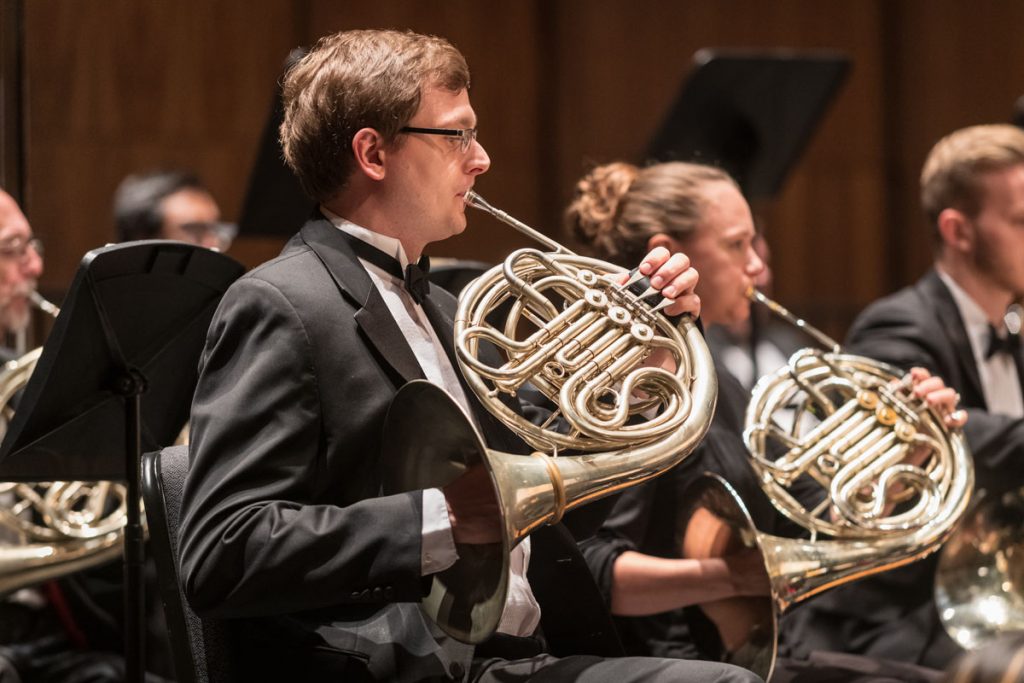 Pictured: hornist Tom Park, who will solo in the Scherzo of Mahler 5.

While the Fifth Symphony isn’t programmatic (it doesn’t have an extra-musical story), Wilkins said it is clearly an emotional journey. “It begins with the funeral march and the great lament, and then the whole piece concludes with enormous optimism and good feeling. I mean, that last movement is like the best day of your life.”

The Adagietto will reference the Wagner from earlier in the program. “Mahler quotes what’s often called the glance motive from Tristan and Isolde,” Wilkins explained. “It’s this incredibly gorgeous little motive that signifies the intrinsic power of the love that they have as a couple.” In the case of the Adagietto, “many have assumed that it was part of a code, a decoration of love to Alma.”

That, combined with the funeral march from the beginning of the symphony, represents to Wilkins the concept of “love death” that is so pivotal to Tristan. Mahler himself grew up surrounded by death. “It was everywhere in his family. He knew it well, and I think essentially this symphony is about finding a way through grief into joy. It’s a darkness-to-light saga, just as Beethoven’s Ninth is.”

On a lighter note, Wilkins and I began our conversation by talking about his holiday trip to the Dominican Republic, where he stayed near a stretch of beaches famous for kitesurfing. “The wind is really strong and consistent, so that was fun getting to see everybody go up. They can hit a wave, and the kite will take them out of the water, and they can actually go for quite a ways airlifted. It’s just amazing what they can do.”

Tickets for Saturday’s performance are available here. At 7:00 pm, Wilkins will discuss the program. After the concert, the audience is free to join some of the musicians in the lobby for TalkBack.

And on Friday, January 17 from 4:30 to 6:30 pm, the Orchestra will host a free event called Beerthoven’s Fourth (not a typo!) at Lock 15 Brewing Company in Akron, with the goal of bringing music lovers together for a casual evening of conversation.

END_OF_DOCUMENT_TOKEN_TO_BE_REPLACED

Franz Welser-Möst led the final bows on Saturday night at Severance, like the star of any show should. The Cleveland Orchestra’s music director is in his element presiding over the ensemble’s annual opera production, which this season packs the drama. Verdi’s Otello — in a concert staging that opened May 21 and runs for two more performances (May 26 and 29) — demands big voices, instrumental forces to match, and a conductor who can give it all shape and direction. END_OF_DOCUMENT_TOKEN_TO_BE_REPLACED

The cimbalom was the feature of the show, an instrument capable of taking on many personas. Its performer, Chester Englander, has shaped his career around the instrument, and has inspired composers to write more repertoire for it, some of which was presented on the program. END_OF_DOCUMENT_TOKEN_TO_BE_REPLACED