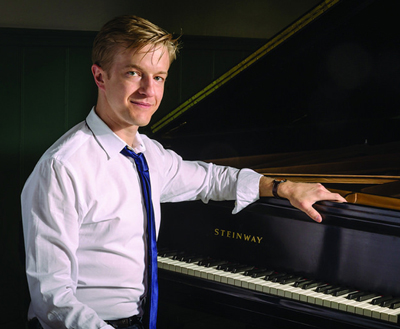 The Akron Symphony appropriately celebrated Saint Cecilia’s Day 2014 with a concert of music by the divine Mozart and the sainted Fauré, but also took the opportunity to elevate the jazzy music of Ravel to the Empyrean. To a neglected symphony and an infrequently performed mass by Mozart, music director Christopher Wilkins added a lovely Fauré bonbon and a wonderfully cheeky Ravel piano concerto, creating a program that showed the patron saint of music to be a woman with wide aesthetic tastes.

Associate conductor Levi Hammer was the superb soloist in Maurice Ravel’s Concerto in G, taking possession of its lively rhythms from the moment the piece was launched with that famous percussion slap. Playing with authority and a crystalline touch, Hammer was rock-steady but full of excitement in both the opening and closing movements, then turned utterly calm for the wonderful Adagio. Later, English hornist Cynthia Warren reprised the long, winding opening melody with elegant phrasing and gorgeous tone.

Wilkins and the orchestra were sharp but playful accomplices, especially in the opening movement, which featured a lovely harp interlude by Jody Guinn. Expert wind solos abounded and the clarinets (both B-flat and the impertinent E-flat model) distinguished themselves in the finale. This concerto is notorious for never making it through a live performance with all its details intact, but Hammer and the ASO came close. Springing off the piano bench at the end to an enthusiastic ovation, Levi Hammer returned to give the audience a calm, measured performance of William Bolcom’s Graceful Ghost Rag as an encore.

Wilkins opened the program with Mozart’s thirty-fourth symphony. Played with clarity and transparency, the symphony functioned as something of an overture to the Ravel. The winds were lovely and the violins energetic though a bit scrappy in fast passages.

Soloists Susan Fletcher, Amy Yekel, Alec Carlson and Adam Cioffari joined the Akron Symphony Chorus, prepared by Maria Sensi Sellner, for Mozart’s Mass in C, K. 317 to conclude the program. Mozart’s difficult boss, Cardinal Colloredo, liked his masses to last forty-five minutes, so this one, celebrating the appearance of the crowned Virgin Mary near Salzburg, was resplendent but typically efficient.

Having warmed up with Fauré’s beautifully lyric Pavane — most often performed without its optional chorus parts — the Akron Symphony Chorus gave a bright, alert account of the Mass, alternating with the well-blended solo quartet. Susan Fletcher brought an appropriately operatic style to her solos in the Agnus Dei.

It’s time for the annual rant about the acoustics of E.J. Thomas Hall — or at least time to record the earnest wish that the Akron Symphony could find a performing space that matches its high quality of music-making. From the audience, everything in EJT sounds as though it’s being filtered through layers of gauze, and you can only wonder what the musicians are hearing of each other onstage. Alternative seating arrangements have improved things to some extent in the past. Perhaps moving the winds closer to the piano for tonight’s Ravel concerto might have made things easier for everyone, but a long-term solution should be somewhere in the works.

Joining a long list of arrangers, Parker Ramsay has now transcribed the Variations for the modern pedal harp, an instrument for which he holds a master’s degree from Juilliard, in addition to a degree in history from Cambridge University, plus a master’s in historical performance (organ and harpsichord) and an artist diploma (organ) from Oberlin. END_OF_DOCUMENT_TOKEN_TO_BE_REPLACED

As organizations gingerly take steps to open up for business, it’s refreshing to have new content to listen to and write about after a solid six months of archival footage. END_OF_DOCUMENT_TOKEN_TO_BE_REPLACED

END_OF_DOCUMENT_TOKEN_TO_BE_REPLACED

Over the past few years, Brian Giebler has visited Northeast Ohio in settings both orchestral and choral, and with repertoire as diverse as Stravinsky, Bach, and the local premiere of a new work. In his impressive solo recording debut a lad’s love, released on Bridge Records, the New York City-based tenor turns his focus to British songs from the first half of the 20th century — a mix of cycles and individual works — and tops off the playlist with a touch of the modern. END_OF_DOCUMENT_TOKEN_TO_BE_REPLACED

To steal a phrase from the third-century Greek philosopher Sextus Empiricus, the mills of the gods grind slowly, but they grind exceedingly fine. The same goes for Deutsche Grammophon. It’s been a dozen years since they were recorded in Hamburg in 2009, but the German company has now issued fifteen Rachmaninoff piano pieces magnificently and poetically played by Sergei Babayan. END_OF_DOCUMENT_TOKEN_TO_BE_REPLACED

END_OF_DOCUMENT_TOKEN_TO_BE_REPLACED

After considering all its options, Cleveland’s period ensemble Les Délices decided to fully embrace the idea of creating pre-recorded “shows” in the place of live, in-person performances this season. END_OF_DOCUMENT_TOKEN_TO_BE_REPLACED