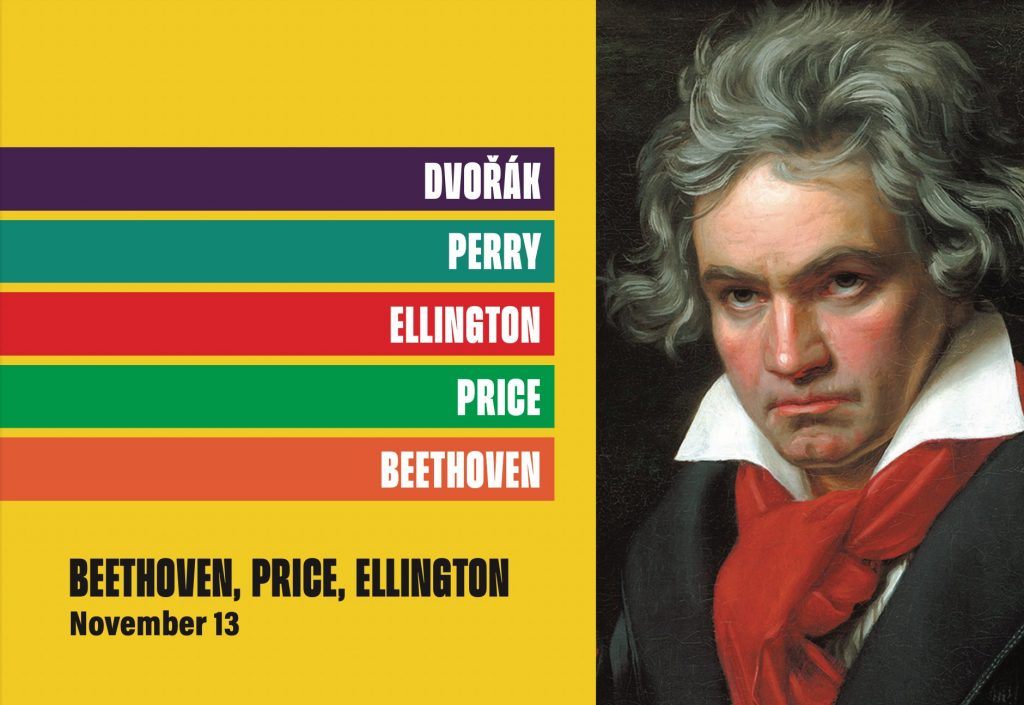 The opening of a concert season is always a festive occasion, and there’s a lot to celebrate this year for the Akron Symphony. “We’ve actually emerged from the pandemic stronger in a lot of ways than we went into it,” music director Christopher Wilkins said in a recent interview. On Saturday, November 13 at 8:00 pm, the orchestra will return to E.J. Thomas Hall with a program of works by Dvořák, Perry, Ellington, Price, and Beethoven.

Over the past year, the Symphony’s “Interlude Season” kept the ensemble playing while their main concert hall was shuttered. “It was a big success, because we did a lot of things we hadn’t done before,” Wilkins said. “We partnered with a lot of new organizations, we got into the neighborhoods more, and we played in small groups which meant different repertoire, which was a good thing.”

Among the ASO’s cancellations in 2020 was a performance of Beethoven’s Symphony No. 5 in celebration of the composer’s 250th anniversary year. But that’s not the only reason the orchestra will mark its return with this iconic symphony.

“If you look at the reassessing of the canon, somehow Beethoven’s voice still seems really powerful and important,” Wilkins said. “He was an iconoclast — he was there to blow up the norms, and something about that feels appropriate right now. He was also a powerful advocate for the voice of the individual artist. And he was a spokesperson for freedom, and in a really profound sense, that feels right.”

As one of the most popular and beloved works in the classical canon, Beethoven’s Fifth is also a great incentive for audience members. Though attendance hasn’t yet returned to pre-pandemic levels, Wilkins said that concertgoers who’ve been in contact with the box office are excited. “For this reopening I know the orchestra will be really, really charged up,” he added. “So I think there’ll be good energy.”

Though audiences might be familiar with the Beethoven, there’s plenty on the rest of the program that they might not have heard. That starts with the opener, Dvořák’s My Home — “a beautiful overture that nobody knows” — followed by works by Duke Ellington, Florence Price, and Julia Perry. All four pieces were chosen for how they represent American identity.

“In a way, Dvořák is the godfather of the idea of reading the American musical tradition in Black and native musics,” Wilkins said. “He wasn’t necessarily the first person to say that the richest source for homegrown American music would be spirituals and Black traditional music, but he was certainly the most powerful and most prominent voice to say that.”

One composer who exemplifies this idea is Florence Price, whose work focuses on the development of Black identity through music. In Ethiopia’s Shadow in America, a series of themes inspired by spirituals craft a narrative about Black musicians, “developing a sense of rootedness out of their African heritage.”

Wilkins and the Symphony are hoping to apply that same idea to composer Julia Perry, who spent her childhood in Akron and is buried in Glendale Cemetery. “We’ve been focusing on a lot of her music, including pieces that have probably never been heard before,” he said. “That’s going to be a wide-ranging project for us over a period of years rather than just this one season.”

Short Piece for Orchestra, one of Perry’s best-known pieces, grows out of the modernist tradition of the mid-20th century. Not only a composer, Perry did a little bit of everything, working as a conductor and enjoying a successful singing career during her time in Europe. “She was certainly comfortable with the orchestra, and this little six-and-a-half minute piece demonstrates her orchestration skills really nicely.”

This will be Wilkins’ first time conducting the pieces by Price, Perry, and Dvořák, but he has done Ellington’s The River a number of times. He called the piece, which uses the idea of the river as an analogy for human life, “a great American classic.”

“It has expansive lyrical moments, really vibrant danceable moments, some places that are filled with intense drive, and it ends with a beautiful jazz hymn. I just think it works magnificently. People who hear it for the first time say, ‘I can’t believe I didn’t know this before — it is so utterly gorgeous.’”