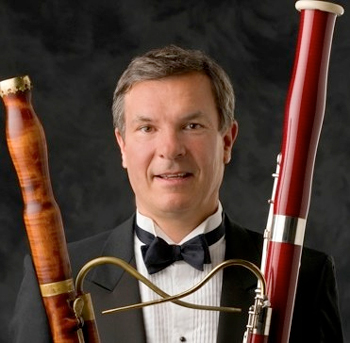 French-born bassoonist Marc Vallon will be one of the featured soloists during Apollo’s Fire’s first set of concerts this season. “Splendor of Venice: An Orchestral Extravaganza,” which runs from October 15-18 at venues in Fairlawn, Cleveland Heights, and Rocky River, will highlight solo and multiple instrument concertos by Antonio Vivaldi and Evaristo Felice Dall’Abaco.

Marc Vallon serves on the music faculty of the University of Wisconsin and plays in the Wingra Woodwind Quintet, an ensemble in residence at the School of Music. We reached him by telephone in Madison to talk about his career and his upcoming appearance with Apollo’s Fire.

Daniel Hathaway: You’ve enjoyed a wide-ranging career as a bassoonist, first playing modern bassoon in the top Parisian orchestras and in such contemporary music groups as Pierre Boulez’s Ensemble Intercontemporain. Then you went on to play baroque bassoon with some of the finest period instrument ensembles in Europe and North America. What led you to take up that instrument?

Marc Vallon: I used to play a lot of contemporary music with Jean-Claude Malgoire, a French oboe player who had recently started the first real early music group in France. He said, ‘You know, you’re someone who would do well on the baroque bassoon. You should definitely try it.’ I said, yes, sure, of course. He gave me an instrument he had bought in a flea market for $500 and said, ‘Get working — you never know!’ I hadn’t even touched the instrument, when a week later he called and said that one of his baroque bassoonists had just dropped out of a recording project. ‘You’ve got to help me!’

That’s how I started. I really liked the people and the fact that we were in small groups. I had played a lot in orchestras from a very young age and realized that the anonymity of performing in the middle of a hundred people really wasn’t my style. In small groups, whether they play early or contemporary music, you feel you’re making more of a difference.

And the musicians in contemporary and early music ensembles are different from orchestral players. They’re risk-takers, people who are ready to experiment with something that’s not completely mainstream. There’s also a little research you have to do when you play early or contemporary music, and you end up practicing a lot more than you would if you were playing second bassoon in a symphony orchestra.

DH: How did you deal with the issue of reeds for the baroque bassoon?

MV: There are a couple of 18th-century sources that provide really nice information about the style of reeds they were making at that time, so I was going in that direction, but I was also doing a lot of experimenting. I must have made something like 500 reeds the first two years of my experiment with the early bassoon. You hope for the best, then you do the best you can. Eventually, you find something that works.

DH: Back to contemporary music — what was it like to work with Pierre Boulez?

MV: It was a fabulous experience. He’s a very demanding musician and there are no excuses with him. You had to be absolutely ready all the time. I’ve always had a huge interest in contemporary music, and still do — I actually write music myself when my students give me a little spare time.

Boulez was the personification of what contemporary music was at that time. It was also great to be in contact with someone who had been closely in touch with Stravinsky. Under Boulez, I played his own music as well as Stravinsky’s. Sometimes it was a little nerve-racking, but it was a fantastic learning experience.

MV: Yes. When he moved to France after discovering that teaching in a college in the U.S. wasn’t his thing, nobody else except perhaps Magoire was performing Lully and Charpentier, even the music of Rameau. That was a huge goldmine that he was the first to exploit. Now, forty years later, he’s still doing fantastic things.

DH: And now you’re teaching in an American university. How did that come about?

MV: I was traveling a lot while I was living in Europe, playing something like 200 concerts a year. When my wife and I started a family, I started looking for a teaching job. She happens to be from Madison — she’s an American — and I learned about a job opening at the University completely by accident, about a week before the application deadline. We had two kids and thought it would be good for them to learn some English. To my big surprise, I got the job and we said, let’s try it for a year. We decided to stay, and now we’ve been here twelve years. It’s a very international city and I have excellent colleagues in the School of Music who give me all the freedom I need.

DH: I believe you’ve performed with Jeannette Sorrell and Apollo’s Fire several times before. What will you be playing on these October concerts?

MV: Yes, I’ve probably been to Cleveland to play with Apollo’s Fire ten times over the past five or six years. This time, Jeannette wanted to concentrate on Vivaldi. He wrote 39 concertos for the bassoon, and some of them are really good. I picked one in the key of a-minor, which is a nice, “tempesta di mare” tonality for the instrument. I didn’t like the slow movement, so I picked one from another concerto. You won’t find that concerto on a CD, but I think the three movements work well together. The combination of solo bassoon with strings makes a really interesting sound. I’ll also be one of the soloists in Vivaldi’s Concerto in F “per Molti Strumenti,” which I’ve never performed before. It’s a very nice discovery!

It might seem that there’s not a lot left to discover after three decades of experience with the Red Priest’s charming and evocative score, but this performance boasted a secret weapon: the young Spanish violinist Francisco Fullana, now the Orchestra’s artist-in-residence, whose affecting personality and easy virtuosity raised the solo part a quantum leap above the merely extraordinary. END_OF_DOCUMENT_TOKEN_TO_BE_REPLACED

END_OF_DOCUMENT_TOKEN_TO_BE_REPLACED

The Cleveland Orchestra’s second performance of the new season on Sunday afternoon, October 17 at the newly renamed Mandel Hall at Severance Music Center was just such an occasion. If the ensemble’s return to public concerts under the baton of Franz Welser-Möst wasn’t enough reason to light a bonfire, the Cleveland debut of a new work written for one of the Orchestra’s most popular soloists, and the swan song of one of its longest-serving members added extra fuel to the celebration. END_OF_DOCUMENT_TOKEN_TO_BE_REPLACED