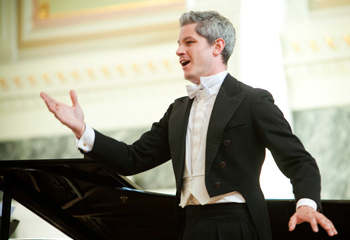 On Tuesday, May 24, French baritone Edwin Crossley-Mercer and pianist Jason Paul Peterson opened the 2016 edition of the Baldwin Wallace Art Song Festival with a recital in Gamble Auditorium. Now in its 30th year, the week-long festival, which focuses on the combination of solo singer and piano, is the brainchild of retired Cleveland Institute of Music voice professor George Vassos.

In addition to two celebrity recitals, the festival also features master classes for student voice-and-piano teams, culminating in a participant recital. The Art Song Festival has a dedicated following, and the auditorium was well-filled for this opening recital.

Edwin Crossley-Mercer cuts a dashing figure on stage, with his ramrod-straight carriage, reserved manner, and Anderson Cooper-ish salt-and-pepper hair. He brilliantly conceived his performance as a theatrical as well as a musical experience: every detail of his stage presence was designed with the songs in mind. His program included many songs dealing with loss and grief; he often sang with eyes downcast. When he looked up at the audience, tilted his head, or made a small gesture with his hands, there was a reason for it. These small and controlled movements subtly illuminated the text and music. At the end of his program, Crossley-Mercer stepped away from the piano for Richard Strauss’s Heimliche Aufforderung (“Secret Invitation”), spreading his arms as if to embrace the audience. It was a grand gesture after an understated evening.

Compared to opera, the challenge of art song is that there are no costumes, scenery, or orchestral accompaniment. The burden is on the singer to convey the story to the audience. Edwin Crossley-Mercer’s voice is robust, with bass-baritone richness — especially in the lower register. He displays complete technical control throughout his range and molds phrases for maximum expressivity.

The first half of Crossley-Mercer’s recital was devoted to one of the core works of the art song repertoire, Robert Schumann’s Dichterliebe (“A Poet’s Love,” 1840). The 16 songs, to texts by Heinrich Heine, are miniatures, and move from one to another with barely a pause. Schumann’s music reflects the delicate imagery of Heine’s text.

Crossley-Mercer’s performance was refined and elegant. His diction was excellent and his tone often conversational, as if he were telling a story. He conveyed every nuance of the text without mannerism. The 11th song, “Ein Jüngling liebt ein Mädchen” (“A young man loved a girl”), is at face value a relatively happy text about youthful love found and lost, but Crossley-Mercer presented it with a sense of irony. In the final song, the poet metaphorically puts away all of his lost ideals in a trunk and lets it sink to the bottom of the sea. The piano is left to end the cycle with a long coda. Jason Paul Peterson was a fine and communicative accompanist throughout the cycle, if sometimes almost too self-effacing.

The second half of the program opened with two eerie and grotesque songs by Schubert. In “Der Doppelgänger” from the cycle Schwanengesang, the narrator is forced to relive a vision of himself in a failed relationship. In “Der Zwerg,” after strangling his queen with a red cord, a dwarf is forgiven by her in death and then begins to burn with desire for the woman he has killed. Crossley-Mercer gave them appropriately hollow-sounding and gothic readings.

The only modern work was American composer Michael Linton’s Silentium Amoris, set to a text by Oscar Wilde. The song is in two distinct sections. The first, in which the narrator laments lost love, is austere, with tonal but not triadic melodic phrases set against dissonant piano intervals. The vocal part hovers between song and speech. When the song seems to be complete, there is an abrupt change. The piano plays gorgeously lyric music, and the singer repeats, “Te amo” (“I love you”) as the song fades away. It was a magical moment.

Works by Liszt, Duparc, and Debussy explored Crossley-Mercer’s talents in French song. Songs to texts by Charles Baudelaire by Duparc and Debussy were among the high points of this concert, particularly Debussy’s Le jet d’eau (“The fountain”) with its surging impressions of water. That composer’s Fantoches (“Puppets”) is dance-like, depicting the commedia dell’arte figures Scaramouche and Pulcinella. The baritone performed Debussy’s depiction of sunset in Beau soir with great subtlety of declamation and phrasing.

Three songs by Richard Strauss completed the program. Crossley-Mercer sang Ständchen (“Serenade”) lightly, almost off-handedly, and Traum durch die Dämmerung (“Dreaming through the twilight”) dreamily, almost as a whisper. (This was one of the very few places in the recital where balance was out of sync.) For all of the completely wonderful moments in the program, it was not until the final song, Heimliche Aufforderung, that Edwin Crossley-Mercer seemed to finally let loose. It was a splendid conclusion.

After several bows, the artists returned for a brief encore, Leoncavallo’s Mattinata, which showed that Edwin Crossley-Mercer is just as comfortable with the Romantic Italian style as he is with the rest of the repertoire. What a great way to end a highly satisfying evening!

Published on ClevelandClassical.com May 30, 2016.

END_OF_DOCUMENT_TOKEN_TO_BE_REPLACED

The strings-only work by Berg has made relatively frequent appearances on the Orchestra’s programs. In 2021, the musicians recorded it for the In Focus series, and it appeared again on last year’s European tour. Friday’s rendition maintained the group’s characteristic light and effortless playing, each section blending as much as possible to echo the work’s original form as a string quartet. At fifteen minutes total, the piece is quite short, but the dense encoded musical meanings require some extra-attentive listening. Splitting up the three movements ensured that each one could be appreciated on its own. END_OF_DOCUMENT_TOKEN_TO_BE_REPLACED