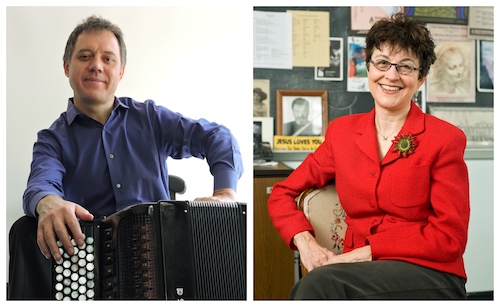 “It’s a place where we can safely get a few cameras in, and it’s going to be closed on Monday morning, so we’re going in at ten,” Jutt said by telephone last week.

The choice of Madison, Wisconsin is also symbolic: it’s the ensemble’s birthplace. Jutt and Venglevski met there in 2019, when she invited him to be a guest artist in the Bach Dancing and Dynamite Society, a chamber music festival she co-founded and co-directs. They hit it off.

“Stephanie is one of the most exceptional musicians I’ve played with,” Venglevski said during a separate phone call. “She’s just a monster on her instrument.” Jutt responded in kind: “I love working with him. He’s a fantastic virtuoso, and he’s also really friendly, fun, and nice.”

Beyond Venglevski’s playing and personality, Jutt was also immediately taken with his fun, short, beautiful, and stylized works. “He’s a very accomplished composer,” she said. “He understands the Eastern European style so completely that he’s able to write pieces that sound like they could have come from the last century, or the present day. They’re really timeless.” She also said they’re adaptable. “Some of them can be played by two, three, or four people, and the instrumentation is flexible too.”

Venglevski was thrilled not only to find a new chamber music partner in Jutt, but also to continue experimenting with the possibilities of his instrument. “All my life, I’ve been trying to play with different groups, different combinations.”

The accordion, he said, has only recently begun to be taken seriously in classical music, which has brought it into contact with more instruments and ensembles. “Now you can hear it with symphony orchestras, with string quartets, with all kinds of things, and there’s lots of contemporary music being written for it.”

When it comes to accordion and flute, Venglevski noted that the Duo has found a collection of pieces that not only fit those instruments, but also that they love to perform. “It doesn’t feel like just preparing for a concert — every piece we play, we enjoy playing it,” he said. That made it difficult to narrow the program down to one hour. “We have too many pieces,” he said, laughing.

As for that shared use of air in the production of sound — something Venglevski pointed out — that doesn’t mean this feels like a traditional pairing of wind instruments, especially from the perspective of a flutist.

“You can stretch out an accordion for a long time and still get some sound,” Jutt said. “But even on my very best day for breath control, I can’t hold notes as long as an accordion can. It’s not physically possible.” (Flute, of course, is known for requiring a huge volume of air to play.)

Whether or not you consider this a true pairing of wind instruments, it’s a pairing they both enjoy — and one they’ll be digging into again this summer with the Bach Dancing and Dynamite Society, another topic that Jutt and I explored.

These days, when you talk about a festival, what you’re talking about is how to make it work in the time of COVID-19. Fortunately, she and her co-artistic director, pianist Jeffrey Sykes, have several innovative plans for this season.

First is the BDDS Bandwagon — inspired by the New York Philharmonic last summer — which will take musicians from one neighborhood to the next to play outdoors. Second, the offering of one-on-one performances through video-chatting apps like Zoom. That’s a continuation of what the festival has been doing for people in ICU’s, in hospice, or isolated in hospital rooms during the pandemic.

Third, they’ll put on a series of virtual concerts, with one twist. The festival has commissioned visual artists to create “art postcards,” Jutt said, which will be mailed to anyone who buys the series. One piece in every concert will come with a prompt — “for example, to think of somebody who helped you out when the chips were down.” The hope is that listeners will write the postcard to that person while hearing the performance, thus “creating alongside the musicians,” Jutt said.

Venglevski is on the roster for three virtual concerts, and potentially for any one-on-one performances requested. “Audiences really respond to him,” Jutt said, “and I’m sure they will in this way too.”

Speaking of gatherings between musicians and listeners, Arts @ Holy Trinity will be offering a Q&A on Zoom with Jutt and Venglevski on March 21 at 3:15 pm, just before the video premieres at 4:00.

“That will be very nice,” Venglevski said. “I look forward to answering some questions, and then introducing people to a fresh program and this unique combination.”

For its latest In Focus episode, “Visions and Impressions,” The Cleveland Orchestra makes a gesture in the direction of welcoming winds back into the action, although principal flute Joshua Smith’s contribution to the event comes in the form of two unaccompanied pieces that leave him looking very lonely on the Severance Hall stage. END_OF_DOCUMENT_TOKEN_TO_BE_REPLACED

LD’s artistic director Debra Nagy introduces the hour-long program with a discourse on the importance of the garden and its centerpiece, the fountain, for artists and musicians of the 14th century. Later in the program, Blue Heron artistic director Scott Metcalfe expands on the subject by exploring the Trinitarian metaphor behind that bubbling source of water in the Medieval mind. END_OF_DOCUMENT_TOKEN_TO_BE_REPLACED

END_OF_DOCUMENT_TOKEN_TO_BE_REPLACED

The latest program, which visits the ghetto and palace at Mantua and the ghetto and church at Venice, uses expressive instrumental music by Salamone Rossi, Giuseppe Sammartini, Antonio Vivaldi, and Alessandro Marcello, two of Benedetto Marcello’s 50 psalm settings, and Hebrew prayers and songs associated with Passover and Purim to evoke the rich cultural life of those towns. END_OF_DOCUMENT_TOKEN_TO_BE_REPLACED