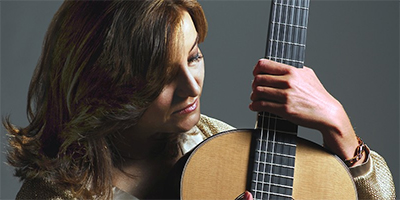 Although Paraguayan guitarist Berta Rojas was set to make her Cleveland debut on March 14, 2020, the coronavirus had other plans.

In August of that year, Rojas gave a free, pre-recorded online concert for the Cleveland Classical Guitar Society: a program entirely devoted to the music of fellow Paraguayan Agustín Barrios Mangoré.

Now, after a two-year wait, Berta Rojas will make her in-person Cleveland debut on Saturday, April 2 at 7:30 pm at Plymouth Church in Shaker Heights. The program celebrates Argentine guitarist-composer Maria Luisa Anido and French guitarist-composer Ida Presti, both of whom were pioneering virtuosos during a time when concert stages were dominated by men. Tickets are available online.

In an email, Rojas said that her program was created to honor two of the great players in guitar history and that the selections composed by Anido and Presti express aspects of their personalities, skills, and influences.

Born in provincial Buenos Aires in 1907, Maria Luisa Anido made her London debut in 1952 at Wigmore Hall, and for several years during the ‘60s concertized and taught in Russia. She was also one of the few female composer-performers of her time.

Rojas said the works by Anido — Preludio Lejania, Aire de Vidalita, Triste No. 1, and El Misachico — “show her knowledge and care for the folk music of Argentina and other South American regions.” She went on: “Anido transcribed and performed tristes and vidalitas by Argentine composers such as Julian Aguirre, and in this program, audiences will hear her own contributions to those forms.”

The playlist also includes Sérgio Assad’s Anido’s Portrait, a work that “celebrates her life and travels, and even her name.”

Born in suburban Paris in 1924, Ida Presti first came to prominence as a child prodigy. She made her public concert debut at the age of eight and soon after began recording for the HMV record label. At age thirteen she performed for Andrés Segovia.

“Presti had remarkable technical skills and a large left-hand stretch, and she incorporated many timbres and articulations into her interpretations,” Rojas said. “These elements of her playing shine through in her works Segovia and Danse Rythmique.”

Saturday’s program also features Gilbert Biberian’s Prelude No. 1, “Tombeau,” another work dedicated to the memory of Presti. The evening will be rounded out with Federico Moreno Torroba’s Sonatina.

When not on the concert stage, Berta Rojas serves on the faculty of the Berklee College of Music. The three-time Latin Grammy nominee is also the recipient of numerous honors from her home country in recognition of her contributions to Paraguayan culture.

During a 2020 interview with ClevelandClassical.com, the guitarist told Jarrett Hoffman, “I feel very privileged to have received those awards, but you know what’s most important for me? The fact that I have played all throughout my country, and that I have played for young people in so many schools in Paraguay.” During her tour of schools from 2009-2018, Rojas said she performed for 50,000 kids.

Jackson began the program with a recitation of Langston Hughes’ poem “Helen Keller” — the first of five poems by Hughes that served as interludes between each piece on the first half. END_OF_DOCUMENT_TOKEN_TO_BE_REPLACED

Pianos with pins and tape on strings, a bass drum and tam tam, crotales, Almglocken, and vibes. Microphones were hooked up all around the instruments. The feed was sent to speakers around the room. Lighting designer Nicholas Houfek hung incandescent globes over the arrangement of instruments from thin black wires stretching across the beams. END_OF_DOCUMENT_TOKEN_TO_BE_REPLACED

From the podium, Elim Chan set an ambitious tone for the evening. The rising star conductor, here in her Cleveland Orchestra debut, has a commanding style, and every twist and turn in Saturday’s performance tracked closely with her baton. END_OF_DOCUMENT_TOKEN_TO_BE_REPLACED