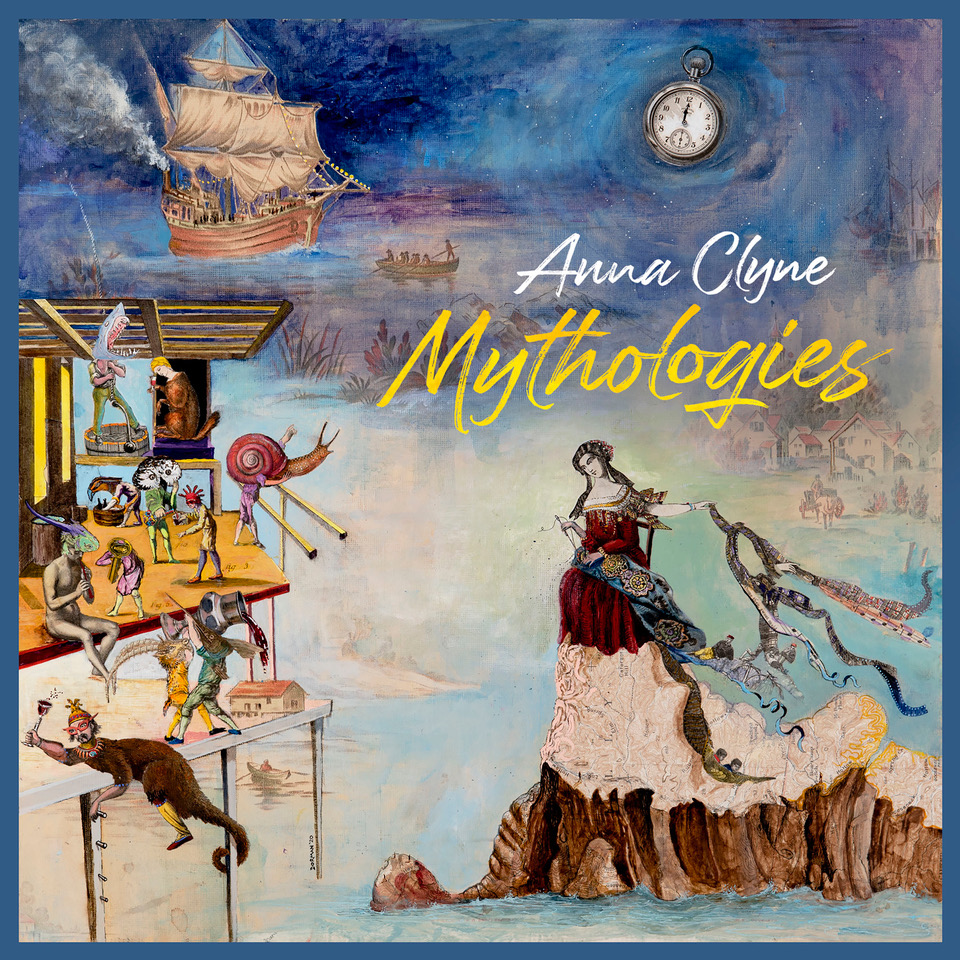 Both accessible and deeply original, the music of London-born composer Anna Clyne is a convergence of tradition and invention, sometimes set against each other to provide a fascinating contrast, other times wrapped up into one enchanting package — familiar sound and fresh sensibility. Her latest album, Mythologies, makes clear that she is an essential voice in the field today, and a supremely enjoyable one at that.

Released in October on Avie Records, Mythologies includes five works brought to life brilliantly by the BBC Symphony Orchestra in live performances recorded over the past decade. Their music-making, and that of the four different conductors who lead them, is top-notch: full of energy and commitment, remarkably polished, and compellingly shaped.

The playlist begins with the five-minute Masquerade, a perfectly bite-sized introduction to this composer’s music, heard here in its world premiere recording. Marin Alsop wraps all of Clyne’s alluring gestures into one fantastic sweep, not unlike magic, which of course also happens with a short stick and a wave of the arm.

Clyne trades in some of the smooth, chromatic runs and soaring high notes from that work for intense articulations and a fascination with the depths of the orchestra in This Midnight Hour. It also shows her all-important instincts of rhetoric. She knows just how to use stasis — or better yet, silence — to break up the flow of energy. BBCSO chief conductor Sakari Oramo is right on the same page, stretching out those long notes and long gaps in sound like he’s daring you to blink.

Oramo remains on the podium for The Seamstress, a violin concerto that shows Clyne’s versatility, ambition, and skill rising to yet another level. The violin part is wide-ranging, its folk-like melodies leading to visceral passages of atonality, long chains of notes spiced with accents, and deeply felt lyricism.

All of that comes together in a tour-de-force performance by soloist Jennifer Koh, who draws you in with her rich tone, undeniable expressivity, and total ownership of this piece — a combination of her technique, her pacing, and the sense she gives you that this music pours out genuinely from her own being.

What makes it work so well is that Buckley’s voice often takes the form of another instrument in the orchestra. First, her role consists of soft hisses and breathy whooshes of air, entering fittingly by joining the flutes. Then she grows to a whisper, with bits of Yeats’ A Coat coming through, barely intelligible. Near the end, we finally hear the poem clearly in Buckley’s gentle, understated tone as the piece hits its climax. Only here, and briefly, does the text take the spotlight from the music, and it feels deserved, the natural completion of a satisfying arc.

Cohesive, varied, inevitable, and full of surprises, those first three works will knock you out. And while the final two, Night Ferry and <<rewind<<, don’t quite reach the same lofty heights, sporting less variation in mood, gesture, and color, it’s interesting to hear them knowing that they’re in fact Clyne’s earliest pieces on the album. In particular with <<rewind<<, her Manhattan School of Music thesis, it’s easy to hear nuggets of magic that clearly boded well for the future — now her present, and ours.

Northeast Ohio’s Les Délices has long been that rarest of beasts: a world-class organization so proud of its region (ours) and repertoire (distinct niches in pre-1800 music) that it never tries to be everything to everyone, paradoxically making a strong case for a broad, curious international following. In the December episode of its SalonEra series, the ensemble embraces its strengths and community to marvelous effect. END_OF_DOCUMENT_TOKEN_TO_BE_REPLACED

END_OF_DOCUMENT_TOKEN_TO_BE_REPLACED

Another I remember fondly is Gian Carlo Menotti’s Amahl and the Night Visitors.  Commissioned by NBC, the one act, made-for-television opera, premiered on December 24, 1951, at the network’s studios in New York’s Rockefeller Center. And now, through the wonders of technology, Cleveland Opera Theater has created a magical new production of the work which is available on demand through January 6, 2021 (Three Kings Day). END_OF_DOCUMENT_TOKEN_TO_BE_REPLACED

Jessen has now followed up with her second solo CD, Winter Chapel. Recorded on January 17, 2020 in Oberlin College’s Fairchild Chapel and available on Carrier Records, the album is a continuum in Jessen’s journey to push the musical boundaries of her instrument and herself as an improviser. END_OF_DOCUMENT_TOKEN_TO_BE_REPLACED