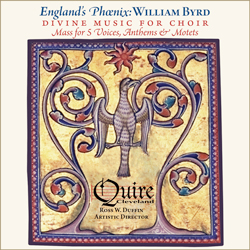 Quire Cleveland’s live recording from its May 2016 concerts featuring the sacred music of William Byrd is distinguished by any measure, but it also comes with more than a little nostalgia. This is one of the last recordings to be engineered under the sure hand of Tom Knab, who died in August. The album is dedicated to his memory. (Read an appreciation here.)

Having reviewed the May 22 performance at Historic St. Peter’s in downtown Cleveland, it would be redundant to repeat those remarks here. Suffice to say that Quire’s recently-released disc gives a fine account of what the audience heard in the church. But which church? The concert was given twice, once at St. Bernard’s in Akron, then the next afternoon at St. Peter’s. Though the two spaces are vastly different in size, they share super-live acoustics that resemble English cathedrals, and it’s difficult to tell between them on this album.

If the ears of the live audience found Quire’s diction to be splendid, it’s even more so on this recording. Knab was able to preserve the halo of reverberation that surrounded the singing while bringing us a bit closer to the words being sung.

As you’d expect from Quire and its musicologist-director Ross Duffin, liner notes feature the full texts of the Byrd motets and a wealth of other information. Guest lecturer Kerry McCarthy, author of a recent monograph about the composer, contributes an accessible, three-page essay placing the sometimes enigmatic figure of Byrd in his historical context.

A nice touch is an image of one of Byrd’s motets from the Blossom Partbooks, three of which reside in the Special Collections at Case Western Reserve University.

The Diamond Brass Quintet opened Rocky River Chamber Music Society’s new season on Monday, October 12 with nobody in the pews at West Shore Unitarian Universalist Church. Like most performances these days, the concert was only attendable online. The players were widely-spaced on the stage, plexiglass shields were in place to cut down on aerosol transmissions, and the quintet took two intervals to go outdoors and let the air in the sanctuary refresh itself. (Rehearsals had been held outside as well.) END_OF_DOCUMENT_TOKEN_TO_BE_REPLACED

“Bewitched,” the first subscription concert of this season by Les Délices, can be summed up in one word: sensational. In her introductory remarks, director Debra Nagy talked about the “Embracing Change” theme of the season and completely rethinking the concert experience for streaming. The detailed planning was in evidence throughout the program. “Bewitched” was not just a concert; it was a carefully planned musical film, with elements of drama and music appreciation, all in support of the inspired program choices featuring Medea and Circe, two famous witches (or sorceresses, if you prefer) of classical antiquity. END_OF_DOCUMENT_TOKEN_TO_BE_REPLACED

END_OF_DOCUMENT_TOKEN_TO_BE_REPLACED

Though it had amassed a vast trove of audio over the decades, The Cleveland Orchestra has come late to the game in the video department. Even so, the organization wasn’t about to rush to produce the equivalent of home movies to keep its patrons engaged while live events were on hold. END_OF_DOCUMENT_TOKEN_TO_BE_REPLACED

END_OF_DOCUMENT_TOKEN_TO_BE_REPLACED

Although it wasn’t the original plan to go online last weekend for the final round of the James Stroud Classical Guitar Competition, moving to a digital format suited the event well. Young performers Aytahn Benavi, Patricia Hernandez, Ian Tubbs, and Eric Wang played in the intimate setting of their own homes, giving everyone who tuned in a front row seat. END_OF_DOCUMENT_TOKEN_TO_BE_REPLACED