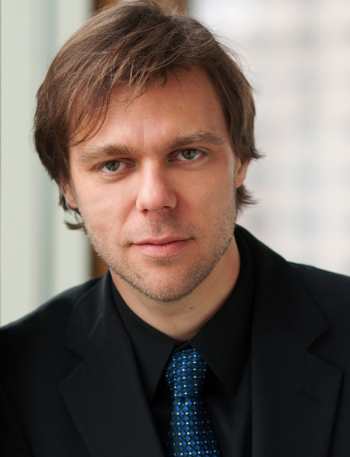 “As I get older I’m really enjoying situations where the audience is five feet away from you and you can feel everyone’s energy,” clarinetist Franklin Cohen told us in March. That month ChamberFest Cleveland, which he co-directs with his daughter Diana Cohen, launched its House Concert Series.

To Lithuanian-born pianist Andrius Žlabys, what’s interesting about house concerts is that they are always unique. “There’s much more variety than with regular concerts, from room size to pianos,” he said from New Haven, Connecticut during a telephone conversation last week. “As a pianist, of course I get to meet new instruments all the time, so it’s always an adventure.”

The third and final event in ChamberFest’s House Concert Series takes place on Thursday, May 16 at 7:30 pm in the home of Mark and Sue Hollingsworth in Shaker Heights — the address will be printed on your receipt after you purchase a ticket.

Frank Cohen, Žlabys, and flutist Irad Carmi will play solos, duos, and trios by C.P.E. Bach, Henri Dutilleux, Francis Poulenc, Moisey Weinberg, and Paul Schoenfield. And after the concert — as is true of the best visits to someone’s home — appetizers and drinks will be served.

Žlabys first encountered the Cohens when he and Diana, a violinist, were studying at the Cleveland Institute of Music. “I always enjoy playing with Diana,” the Grammy-nominated pianist said. “She’s fantastic and a pleasure to work with. Frank is of course a legend, and for a very good reason. He’s an incredible musician and teacher.” 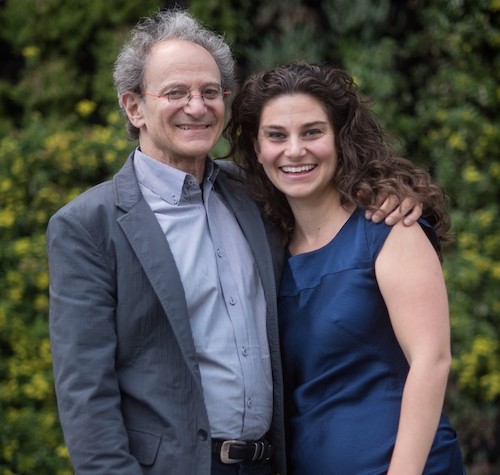 While Žlabys “holds a special reverence for J.S. Bach,” as he writes in his bio, he also loves the music of that composer’s son Carl Philipp Emanuel, whose “Hamburger” Sonata for flute and continuo opens the program.

“I just think he inherited so much from his father, and yet he kind of bridged the gap from the Baroque to the Classical style,” Žlabys said. “Obviously he had enormous compositional talent.” The pianist pointed out that C.P.E. was once a more popular composer than his father, who was considered to be old-fashioned. “It’s interesting to see what people think of a composer during his or her lifetime as opposed to later on.”

Poulenc and Dutilleux are both French composers from the 20th century, but their duos on this program were written at opposite stages of their careers, and largely express opposite emotions.

Dutilleux was not at all happy with the popularity of his early Sonatine for flute and piano, which became a standard of the repertoire, but which doesn’t sound like his later style. “He didn’t want it to be performed in France,” Žlabys said. “I find it absolutely lovely. It’s very youthful and lighthearted in some ways.”

The Sonata for clarinet and piano, on the other hand, was one of the last pieces Poulenc wrote. And as Žlabys noted, the composer never got to hear it performed — it was premiered after his death by Leonard Bernstein and Benny Goodman at Carnegie Hall. “There’s this immense sadness in the first two movements,” the pianist said. “The first has this really beautiful character — its tempo marking is Allegro tristamente. The last movement, though, is very much life-affirming.”

Žlabys will receive the spotlight during Weinberg’s Children’s Notebook No. 1 for solo piano. “I absolutely love Weinberg,” he said. “I think he was just a genius — truly a composer of extraordinary talent. And it’s incredible how much he wrote.” Žlabys mentioned Weinberg’s forays into rare genres — multiple sonatas for solo viola and one for solo double bass — as well as his more than twenty symphonies. “And his Violin Concerto is just a masterpiece. I recently heard it with Gidon Kremer and the Boston Symphony.”

The Children’s Notebook is a thirteen-minute cycle of eight pieces. “There’s a simplicity in the writing,” Žlabys said. “It’s extremely transparent, and in some ways could be played by a young person. But just like Schumann’s Kinderszenen, it has this intricate and profound beauty. It would be very interesting to perform side by side with the Schumann at some point.”

Schoenfield’s Sonatina for flute, clarinet, and piano is a new work for Žlabys. “I’m excited, and I’m looking forward to the rehearsals. It’s extremely challenging for piano — Schoenfield was himself a concert pianist, and it really shows,” he said, laughing. “The music has an amazing mixture of styles, with lots of jazz elements. It’s very interesting writing.”

I closed our conversation by asking about the other side of Žlabys’ musical career: composition. He told me he’s been performing his 2016 Movement for String Quartet and Piano with different groups — “mostly here with the wonderful New Haven Quartet,” he said. And his Perpetum was recently played by Gidon Kremer and Kremerata Baltica as part of a reading session. Now he’s working on a piece for piano, and one for violin and orchestra.

“I came to composition a bit late,” he said, adding that it has changed his perspective as a performer. “You realize how challenging it is to mark up the score — not too much, but just enough — so that it’s extremely clear what you want. Now when I see a composer’s marking, even if my musical intuition is telling me something else, I will say to myself, wait a second, I have to really give it a try. Obviously he or she took time to communicate this.”

The Cleveland Orchestra — or at least half of it — marked Valentine’s Day with a straight-through, 50-minute concert led by Belgian early music guru Philippe Herreweghe. The February 14 performance, marketed as a romantic evening of orchestral classics, played to a packed house (marketing works!). END_OF_DOCUMENT_TOKEN_TO_BE_REPLACED

Music is said to be a universal language, but it does speak with different accents. When you’re playing music by Jean Sibelius, it’s helpful to have a Finnish conductor on the podium, which is what made Susanna Mälkki’s pair of Cleveland Orchestra concerts so lucid and communicative earlier this month. END_OF_DOCUMENT_TOKEN_TO_BE_REPLACED

END_OF_DOCUMENT_TOKEN_TO_BE_REPLACED

Today’s touring string quartets hew to so uniformly high a standard that it’s often little individual touches that make ensembles stand out. The Polish musicians who make up the Apollon Musagète Quartet showed up at Plymouth Church in Shaker Heights for their debut on the Cleveland Chamber Music Society series on February 4 in matching plaid suits and black shirts. And jettisoning their jackets, they played standing (except for the cellist). END_OF_DOCUMENT_TOKEN_TO_BE_REPLACED