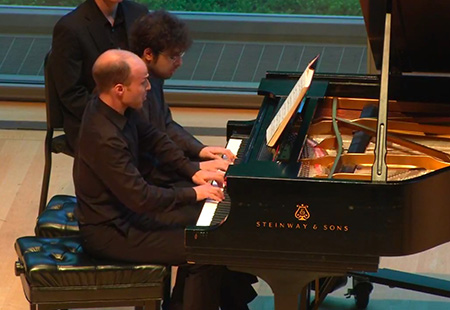 The seventh season of Chamberfest Cleveland opened on Thursday, June 14 at the Cleveland Institute of Music’s Mixon Hall. The festival, brainchild of Cleveland  Orchestra principal clarinet emeritus Franklin Cohen and his daughter, violinist Diana Cohen, concertmaster of the Calgary Symphony, has become an imaginative and well-attended fixture of June in Cleveland. The opening program typified the festival by combining familiar works with the more unusual.

This season’s theme, “In Search of Freedom,” is interpreted very broadly, and the connection of opening program’s music to its title, “A Burst of Freedom,” was tenuous at best. But concert titles are irrelevant when the music-making is as fine as that on the opening program.

Pianists Orion Weiss and Roman Rabinovich were completely in sync with each other’s playing in Schubert’s Military Marches, D. 733. The first, in D major, is the most famous of the three, but usually in one of its orchestral transcriptions. The duo overcame its familiarity in a performance suffused with variety, consistent phrasing, and sensitive rubato. The second, in G major, was more deliberate in its pacing. The final, in E-flat major, was pure delight. Schubert wrote these marches in 1818 as teaching pieces for two teenage countesses. They were probably a great success at the time, but one doubts that the royal performances were as musically lively as those of Weiss and Rabinovich. 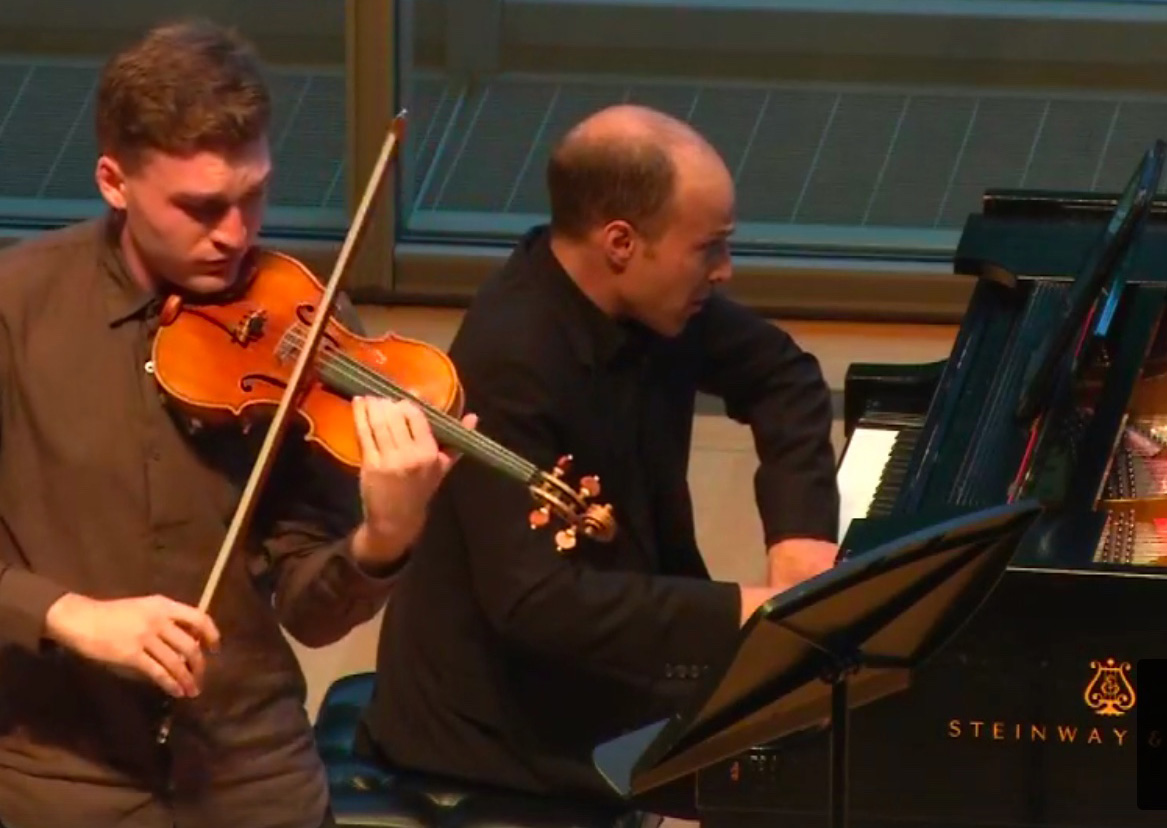 Alexi Kenney joined Weiss for Leoš Janáček’s Violin Sonata, which the composer started in 1914 as the First World War began and continued to revise until 1921. The sonata is full of sudden mood changes, and contrasts between violent and achingly lyrical passages. Neither performer shied away from the dramatic impulses of the score, but Kenney carried the burden of maintaining the musical thread throughout. Even when the violin has soaring melody, the piano is often given short, nervous, repeated motifs.

The second movement Ballada is more overtly lyrical, sometimes with an unusually simple diatonic melody line, leading to an ending on an ethereal high note that fades gradually into the distance. The third movement was sharply accented, as if it was a Czech folk dance. Although the fourth movement begins with lyrical music, later the violin interrupts with reminiscences of the violent themes of the sonata’s opening. Weiss and Kenney managed to stitch together a unified musical fabric from the dark shreds of Janáček’s imagination. 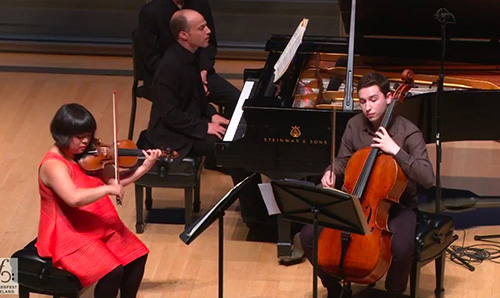 The rest of the concert was devoted to Beethoven’s Piano Trio in B-flat, Op. 97 (“Archduke”), composed in 1811. Chamberfest Cleveland stalwarts Yura Lee, violin, and Oliver Herbert, cello, joined Weiss for this work of almost symphonic dimensions, which finds Beethoven at the height of his developmental powers. While maintaining the overall thrust of the music, the trio’s reading was full of lucid details like the very quiet pizzicato/staccato section of the first movement and the odd fugal sections in the second. In the third movement variations, the unanimity of articulation and phrasing was very fine, as was Yura Lee’s ecstatic violin solo. The variations proceeded directly to the jolly, dynamically contrasted finale.

The quality of performance for the opening concert set a high bar for the rest of the seventh edition of Chamberfest Cleveland. There can be little doubt but that level will be maintained over the next two weeks.

END_OF_DOCUMENT_TOKEN_TO_BE_REPLACED

Rodgers & Hammerstein’s Cinderella was originally produced for television in 1957 — seven years after the animated Disney film was released — and starred Julie Andrews. According to the Rodgers & Hammerstein website, it was viewed by over 100 million people. END_OF_DOCUMENT_TOKEN_TO_BE_REPLACED

The story line has its origin in an 1855 play and an 1842 farce that Thornton Wilder mined for his 1938 play The Merchant of Yonkers. When that turned out to be a flop, in 1954 Wilder made the crucial decision to re-center the show around the character of the legendary marriage broker Dolly Gallagher Levi and renamed it The Matchmaker. END_OF_DOCUMENT_TOKEN_TO_BE_REPLACED

The Dodero Center for the Performing Arts at the Gilmore Academy in Gates Mills is one feature of an impressive campus. The auditorium is shallow, the stage is deep, and the ensemble played without a shell. Throughout the program, the sound, especially in instruments’ lower registers, tended to disappear. END_OF_DOCUMENT_TOKEN_TO_BE_REPLACED