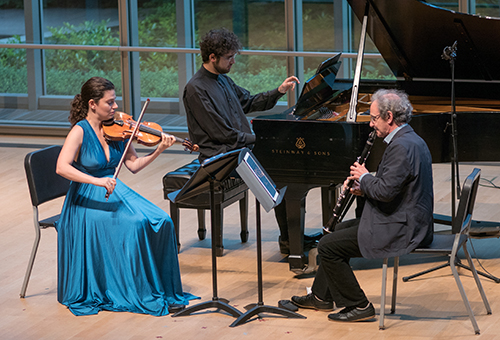 In the fifth concert of this year’s ChamberFest Cleveland season, programming took “A Turn in the Road” amid the festival’s theme of searching for freedom. Three trios played works by Alban Berg, George Crumb, and Antonín Dvořák, each of whom sought liberation from aesthetic constraints in some way. The resulting musical experience on June 21 in the Cleveland Institute of Music’s Mixon Hall had remarkable stylistic and sonic range.

Spoken commentary prefaced the performance by Diana Cohen, Franklin Cohen, and Roman Rabinovich of Berg’s Adagio for violin, clarinet, and piano. Rabinovich pointed out some of the compositional intricacies that lace the score, and even played one of Berg’s themes in a harmonization more reminiscent of Richard Strauss, a contemporary. That the Cohens and Rabinovich viewed Berg’s work as a modernist alternative to Straussian sensuality became clear in performance.

Rabinovich made his every gesture clear and distinct: aphorisms hung in cool, dry, autumnal air. Both Cohens played with the boundaries between tone and silence as their phrases faded into whispers. The trio’s reading pointed toward the composer’s more severe successors, with an overall texture that was more sandpaper than syrup. 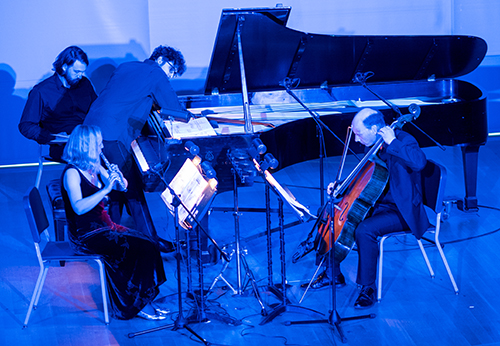 Flutist Lorna McGhee displayed technical assurance in the opening “Vocalise (…for the beginning of time)” of Crumb’s Vox Balaenae, as the audience’s eyes adjusted to a stage illuminated by a soft blue glow, a fitting habitat for the “Voice of the Whale.” Crumb’s mature music only works well when its performers commit to its experimentalism and built-in theatricality, and this rendition worked.

Cellist Clive Greensmith executed a series of tricky harmonics with apparent ease, and Rabinovich laid down stabilizing low tones and sparkling upper-register note clusters. An unidentified collaborator in the balcony supplied a haunting whistle. However, McGhee’s transitions between flute tones and singing proved the most uncanny of all these effects. The concluding “Sea-Nocturne (…for the end of time)” found the trio reveling in traditional harmony in a poignant conclusion that brought many listeners to their feet. 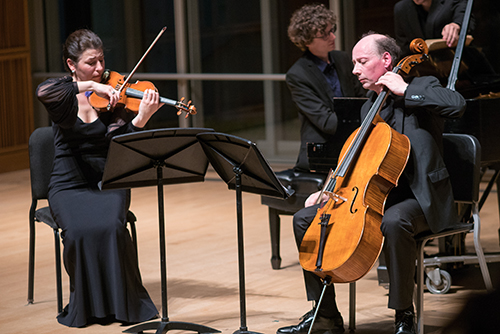 Subtlety and power coexist in the Brahmsian mode that Dvořák inhabits in his third Piano Trio and other middle to late chamber works. For their performance, Greensmith and violinist Amy Schwartz Moretti sat well to the front of pianist Zoltán Fejérvári — an appropriate arrangement for a piece in which the violin and cello often act as co-conspirators.

The first movement brimmed with Romantic angst and sudden turns of mood. At times, and in Fejérvári’s playing in particular, musical context seemed to take a backseat to the isolated beauties of a single interval, instrumental figure, or sound. Moretti and Greensmith made for a great team throughout the tricky, intense second movement, though the cellist stood out with his take-no-prisoners approach to low-register playing and technical perfection throughout. Moretti dug into her own lower strings to beautiful effect in the slow movement, where the composer’s clever harmonies charm the ear. The finale is long and varied enough that it could lag, but that verb appears not to exist in these players’ vocabularies; they carried the concert home with panache. 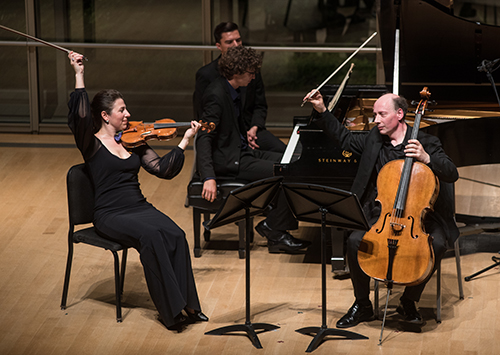