Rabinovich set the stage for his performance with a comprehensive introduction. He provided a near-complete historical picture of the work, from scholarly skepticism (“We don’t know much about the Goldberg Variations”) to practical performance history (the 20th-century revival of the piece, typified by Glenn Gould’s 1955 recording) to the storybook version of how the variations got their name (a court harpsichordist who played a movement or two for the Russian ambassador when he couldn’t sleep).

Rabinovich then outlined his own interpretation, classifying the 30 variations into three groups — physical, emotional, and intellectual — and backing up his take with a handful of excerpts. Before the delicate first notes of the opening Aria had sounded, the audience had already heard bits of Variations 1, 12, 13, and 15, along with an isolated rendition of the bass line that underpins the entire work. So much introduction can put a paralyzing weight of expectation on a performance, though if any piece warrants overthinking, it’s the Goldberg Variations.

The pandemic, of all things, played the clarifying role in Rabinovich’s interpretation. At Friday’s concert, the pianist spoke of the piece as a stay-at-home project of sorts — getting it into performance shape “saved me during this pandemic,” he said, lending a sense of purpose and discipline to otherwise unstructured days. With this vision of order, Rabinovich hit on something intrinsic to Bach’s music — something tricky to communicate in performance — and the essential challenge of programming the Goldberg Variations. 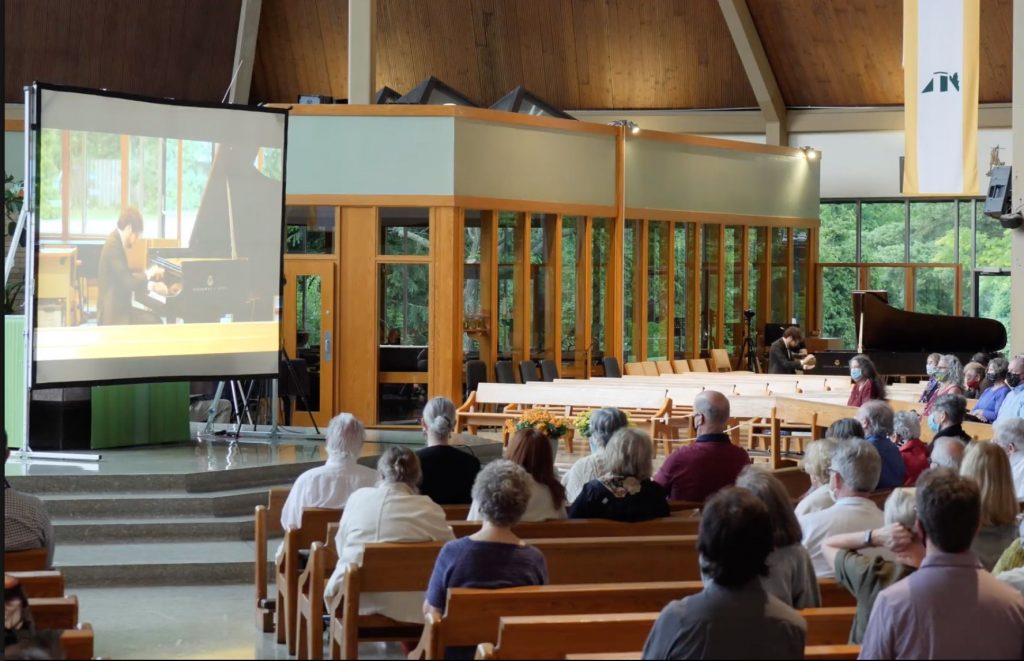 This is musicians’ music, almost better practiced than performed. A piece in variations resembles the very process of learning that piece itself. (In this sense, the story of the Russian ambassador gets at a truth about the Goldberg Variations — that they’re best experienced repetitively and in fragments.) The complexity of any given variation makes competing claims on your attention, so making sense of things — whether as a performer or as a listener — becomes a musician’s task. (Glenn Gould’s achievement was to make this easier for everyone with his characteristically clear articulation.)

Rabinovich, in a less-than-ideal live space, fared best with the physical, or virtuosic, movements. In Variations 14 and 20, note after note created a wash of sound against which individual details (a long trill, a turn in the direction of the phrase) stuck confidently out, contributing to a splashy, almost Romantic-era affect.

The same wash of sound worked against many of the dance movements — which Rabinovich rightly conceived of as emotional, or character pieces — by privileging the upper voices while rendering each bass line indistinguishable. The pianist dwelled on the intellectual music — the canon variations and those with the most intricate harmonies (No. 25, famously) — shaping beautiful phrases but plodding full variations that were not helped by observing every repeat.

But the evening’s most striking musical moment was a matter of fewer notes, not more. After 30 variations, returning to the opening Aria, Rabinovich removed most of Bach’s notated ornaments, the pianist’s equivalent of packing up the set before the show is over. What remained was an almost cruelly simple melody, from which any number of variations could be spun.

END_OF_DOCUMENT_TOKEN_TO_BE_REPLACED

What was that strange din coming over the live feed from Ludwig Recital Hall on Friday evening, July 23, as the Miami String Quartet filed onstage to play the third faculty recital of the Kent Blossom Music Festival? Accustomed as we were during the pandemic ban on live audiences to hearing the sound of no hands clapping, it was both startling and thrilling to witness a large crowd putting their hands together to welcome one of the Festival’s perennial favorites back for an in-person performance. END_OF_DOCUMENT_TOKEN_TO_BE_REPLACED

Practical reasons aside, there aren’t many ensembles who can put together an all-Mozart evening as elegantly as The Cleveland Orchestra. END_OF_DOCUMENT_TOKEN_TO_BE_REPLACED