An evening of string quartet music can be a beautiful thing, but with a whole cast of musicians in residence, ChamberFest Cleveland enjoys the luxury of being able to field a variety of different ensembles on a single program. On Thursday, June 25 in CIM’s Mixon Hall, a concert that began with a Haydn quartet took on new sonorities with a Britten piece for oboe and three strings, expanded to include more strings plus harmonium and piano for a Johann Strauss Jr. waltz, then involved two pianists, two percussionists and a stage full of sound-generating devices in George Crumb’s Music for a Summer Evening. It was an amazing program.

In brief, well-chosen remarks, artistic director Diana Cohen explained that this concert would explore music that created an arch. Haydn’s “Sunrise” Quartet (Op. 76, No. 4 in B-flat) that opened the concert, and Crumb’s nocturnal fantasy that ended it, defined the arch of a day. Benjamin Britten’s Phantasy Quartet was constructed in the form of a musical arch. And Alban Berg’s arrangement of Strauss’s Wine, Women, and Song? That was just fun, and allowed the ensemble to make use of the reed organ ChamberFest had hunted up for Dvořák’s Bagatelles on its first concert.

With nearly eighty quartets to his credit by 1797, when the B-flat quartet as written, Haydn had managed to get a firm grasp on the format, and gave himself the liberty of playing around with it. The usual transition from elegant sophistication to cheerful earthiness is particularly vivid in its Menuet and Trio, and its strophic finale concludes with a striking unison tutti passage and a frenetic rush to the finish line. The second movement Adagio is striking for its profound simplicity. Violinists David Bowlin and Alexi Kenney, violist Dimitri Murrath, and cellist Clive Greensmith played the quartet with a lean but colorful tone and with faultless ensemble. Many an established touring quartet would have been proud of the results.

Britten’s Phantasy Quartet, the work of a brainy 18-year-old with a sure sense of motific development and musical form, was the suggestion of Metropolitan Opera principal oboe, Nathan Hughes, who joined violinist Yehonatan Berick, violist Jennifer Stumm and cellist Julie Albers in a vivid reading of the 1932 piece. Musically, the string players seem to march in from a distance, then retreat after pausing to play a lyrical episode in the town square. The oboe joins them a bit later and stays behind while the others march off. Hughes’s dark, attractive sound was a lovely foil to the variety of arresting effects the strings produced. Stumm’s viola playing was particularly noteworthy, if occasionally a bit aggressive. 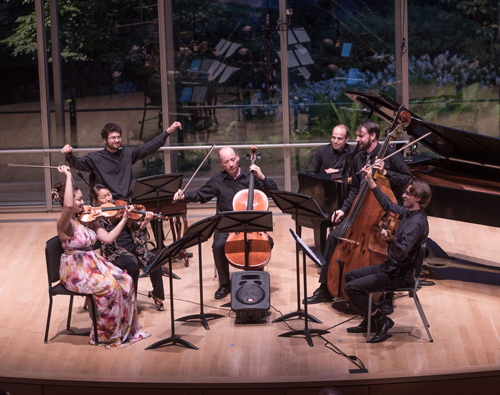 Murrath and Greensmith returned for the Strauss, joined by violinists Jinjoo Cho and Mari Saito, bassist Nathan Farrington, pianist Orion Weiss, and harmonium player Roman Rabinovich, who performed on a fold-up instrument of the “melodeon” variety that can be found now and again in antique stores. (Berg arranged Wine, Women, and Song in 1921 for a benefit concert to support Arnold Schoenberg’s Society for Private Musical Performances, a club that presented concerts of new music in arrangements for small ensembles, often including the harmonium as a fill-in instrument).

As intended, WW&S was a delightful entremet, stylishly played with typical Viennese lifts and rubatos. The European harmonium, a larger, louder instrument whose tone is produced by blowing air across brass reeds, would have made more of an impact than the American version, whose reeds are activated by vacuum pressure. But with the help of amplification, Rabinovich’s wheezy melodeon made its voice known to good effect. One or two fewer repeats would have made the waltz less repetitive.

ChamberFest punningly served “Crumb Cake” to the audience during intermission while the complicated piano and percussion installation for Music for a Summer Evening was set up, but many stayed to watch the process. Percussionists Marc Damoulakis and Scott Christian located their huge battery of instruments, strikers, and mallets with the precision of a French chef preparing a mis-en-place — or a surgical team getting ready for a complicated operation. 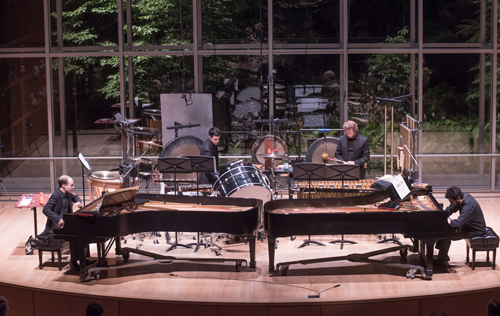 That was a necessity. Neither Damoulakis nor Christian had much time to switch between instruments during the endless string of effects in Crumb’s 40-minute work — and neither did pianists Orion Weiss and Roman Rabinovich, who played as often inside their tail-to-tail grand pianos as they did on the keys, and had thumb pianos and other noisemakers to take up from time to time as well.

The work could come off sounding dated (written in 1974, it conjures up such risky images as “Hymn for the Nativity of the Star-Child” and “The Five-fold Galactic Bells”), but thanks to George Crumb’s cunning sense of musical space and sure ear for sonorities, Music for a Summer Evening is completely fascinating. All four musicians approached the work with complete devotion, and all four were as masterful when Crumb directed them to shout, sing, vocalize or whistle, as when he allowed them to play their own instruments. A huge ovation brought the capacity crowd to its feet after the last tone had vanished into nothingness, marking the end of a superbly varied evening.

Franz Schmidt’s Symphony No. 4 showcased the ensemble, under guest conductor Jonathan Berman, in the standard conventions of a not-so-standard piece. But at the start of the program, the musicians were equal partners to pianist Cédric Tiberghien, whose playing could be as bold as the full orchestra or as intimate as any instrumental solo. END_OF_DOCUMENT_TOKEN_TO_BE_REPLACED

END_OF_DOCUMENT_TOKEN_TO_BE_REPLACED

Jackson began the program with a recitation of Langston Hughes’ poem “Helen Keller” — the first of five poems by Hughes that served as interludes between each piece on the first half. END_OF_DOCUMENT_TOKEN_TO_BE_REPLACED

Pianos with pins and tape on strings, a bass drum and tam tam, crotales, Almglocken, and vibes. Microphones were hooked up all around the instruments. The feed was sent to speakers around the room. Lighting designer Nicholas Houfek hung incandescent globes over the arrangement of instruments from thin black wires stretching across the beams. END_OF_DOCUMENT_TOKEN_TO_BE_REPLACED

From the podium, Elim Chan set an ambitious tone for the evening. The rising star conductor, here in her Cleveland Orchestra debut, has a commanding style, and every twist and turn in Saturday’s performance tracked closely with her baton. END_OF_DOCUMENT_TOKEN_TO_BE_REPLACED