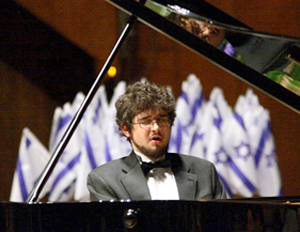 “Many pianists shy away from Haydn’s keyboard works, but I think they’re beautiful — incredibly inventive, funny, deep, and everything in between,” pianist Roman Rabinovich said during a recent telephone conversation.

On Sunday, December 11 at 3:30 pm at the Music Settlement, Rabinovich will present the first of three concerts dedicated to Haydn’s keyboard sonatas as part of ChamberFest Cleveland’s Winter Mini Festival. Each concert will feature five sonatas, as well as additional surprise performances.

The pianist and ChamberFest fan favorite said that these programs are part of his two-year long Haydn Sonata Project. “There are 45 sonatas that are considered to be genuine, but he wrote even more — some of them are lost and some cannot be authenticated — but I am playing all 45.”

Now in the second year of the project, the Uzbekistan-born pianist recently performed 24 of the sonatas during recitals in Israel and Scotland, which he said was a “risky undertaking just because of the number of pieces. I think it went well. It’s such inventive music and it always connects with people.”

Rabinovich said that one reason Haydn’s keyboard sonatas are often ignored by pianists is because they played them as children. “It’s actually very difficult music, and more experimental than Mozart sonatas,” he said. “Every sonata is different, from the little two-movement short sonatas to four-movement works that are almost like a symphony. They are quite varied and you never know what you are going to get.”

During the three ChamberFest concerts, the Curtis- and Juilliard-trained pianist will be performing 15 of the sonatas: How did he choose the groupings? “I was looking for key relations, but I also wanted to build a dramatic continuity within each program, so each grouping leads to the final sonata.”

In addition to delving into the 45 sonatas, Rabinovich has also enjoyed discovering more about Haydn the man. “He had a very unusual life, because from the age of thirty he spent most of his time in service to the Esterházys as a court composer. Because of that he didn’t travel a lot until his trip to London when he was quite old. It’s amazing to me that in spite of living in this very provincial location, he managed to become the world’s greatest and most influential composer. And from all accounts, he was a very kind person and very good to his orchestra. He was a genuine guy.”

Rabinovich said that one example of Haydn’s humanity can be found in the story of how the composer came to write his “Farewell” Symphony. Because the musicians were required to live at the court and not allowed to visit their families, they went to Haydn and asked him for help. “So he wrote this symphony where at the end the members of the orchestra leave one-by-one until there is no one left. The Prince got the message and decided to give the musicians some time off.”

Like his symphonies, Rabinovich said that Haydn’s keyboard sonatas changed over time, especially during his London years when he encountered English pianos equipped with an una corda pedal for the first time. “These pianos gave Haydn new tools to work with,” he said. “If you look at the three ‘London’ or ‘Bravura’ sonatas, they are larger than life in terms of texture. He also uses the pedal to create a magical sound world that the Viennese pianos couldn’t give him.”

Rabinovich noted that unlike Beethoven, Haydn was not a virtuoso pianist and therefore was not composing his sonatas for himself but rather for specific professional players. “That changed during the 1770s when he started writing for amateurs. This new market arose because people began to be able to afford pianos for their homes. They also began to have house concerts. This was a new adventure for Haydn, and his notation became far more precise. His early sonatas are almost like sketches because they were written for professionals who knew how to embellish and improvise, so he didn’t have to write out everything.”

How has Roman Rabinovich gone about learning all 45 of Haydn’s keyboard sonatas? “It takes a lot of planning,” he said, “and I did have to commit to practicing five or six sonatas every day, no matter what. Last year was a little overwhelming, but I feel like it is a little bit easier this year.”

ChamberFest’s Winter Mini Festival will continue with a Candlelight Concert on Tuesday, December 13 (this concert is sold out) and the Finale Concert and Post Concert Reception will be held on Friday, December 16.

END_OF_DOCUMENT_TOKEN_TO_BE_REPLACED

Supported by engagingly, yet simple staging by Cara Consilvio, a well-prepared cast of singers told the archetypal story of Cinderella with charm and flair. Framing the production was  a sparse but colorful set and wonderful lighting by Dave Brooks. END_OF_DOCUMENT_TOKEN_TO_BE_REPLACED