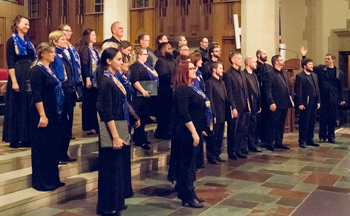 Cleveland Chamber Choir’s “March Choral Madness” concerts this weekend won’t feature dueling madrigals vying for slots on basketball-like brackets as they did in 2018. Instead, artistic director Scott MacPherson has chosen an interesting program of works by Johannes Brahms, Andrew Rindfleisch, and Benjamin Britten for the Choir’s mid-season programs on Saturday, March 9 at 7:30 pm at Brecksville Methodist Church and Sunday, March 10 at 3:00 pm at First Baptist in Shaker Heights.

I chatted on the phone recently with Oberlin Conservatory musicology professor Charles Edward McGuire, who will be giving pre-concert lectures 45 minutes before each of this weekend’s performances. What does he plan to tell the audience?

“I’ll be talking about my love for all three of these fantastic composers,” he said, adding that he’s trying to decide how interactive he wants to make the presentations. “You don’t have all the audiovisual aids in a concert venue that you would in a classroom. You have to rely on people’s imagination, slip in the occasional joke, and hope that the handheld microphone works.”

McGuire has sung and conducted a lot of choral music along with his academic studies, but he’s especially tuned into this ensemble and this particular program, which brings several relationships into play.

“Andy Rindfleisch and I have been following each other around for years,” he said. “Though he was a few years ahead of me, we were both in graduate school together at Harvard, and we did a seminar on pop music together way back in the day.

“Andy and Scott had known each other at the University of Wisconsin at Madison when Scott taught there and Andy was an undergraduate. Now we have this interesting kind of triangle: Andy is at Cleveland State University, I’m at Oberlin, and Scott is at Kent.”

Those people-connections make a natural transition into music by Brahms that leads off the March programs — Der bucklichte Fiedler, Op. 93a, No. 1, Waldesnacht, Op. 52, No. 3, and the Drei Gesänge, Op. 42. “Brahms was part of the tradition that engendered the idea of people coming together to sing, and his work with choirs and choral music spanned his entire career. As a conductor, Brahms was engaged by choirs in Detmold (1857-9), Hamburg (1859-60), and Vienna.”

That contrasts with the final work on the program, Britten’s A.M.D.G., a set of pieces on poetry by the Jesuit priest Gerard Manley Hopkins written in 1939 after the composer arrived for his sojourn in the United States — but only published in 1989. “It was intended for Peter Pears’ Roundtable Singers, a virtuoso ensemble. I’m trying to imagine four to eight people performing the piece, and I just don’t get it. I think Britten might have been thinking a bit too ambitiously there, which may be one of the reasons why he shelved the piece for such a long time.” 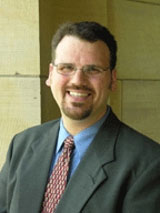 McGuire finds it odd that Britten is mostly thought of as a composer of instrumental music. “But if you look down his works list, there’s choral music being composed alongside almost every instrumental composition. There are things he’s known widely for because we perform them all the time, like A Ceremony of Carols and the Hymn to St. Cecilia — which were my first experiences of singing and conducting Britten way back in the Dark Ages. But there’s just such a wealth of choral music of every sort.”

That led the Choir’s resident musicologist into a brief homily about the stature of choral music in society. “Choral music is often devalued, not just in this country, and choral ensembles are usually expected to be amateur instead of professional. But because choral music has frequently been used as a means of moral uplift, there’s this interesting kind of academic concern about it. A lot of people end up not studying choral music, or when you do, people look at you oddly.”

McGuire believes that choral music provides an important gateway into the music of our time. “This is the stuff that’s actually being performed and listened to by large numbers of people in churches and elsewhere. You have so many orchestras that are afraid of performing music by living composers because they don’t think it’s bankable, but then there are groups like Cleveland Chamber Choir. At least half of its repertoire in any given season is from the 20th and 21st centuries.”

Which led directly into a discussion of music by Andrew Rindfleisch. This weekend, Cleveland Chamber Choir will perform his three-movement Klangfarben (“Timbres,” on poetry of Rainer Maria Rilke), O Livoris Feritas (text by Guillaume de Machaut), and I Sing to Use the Waiting (Emily Dickinson).

Cleveland Chamber Choir member and executive director Kira McGirr has told McGuire “how wonderful and challenging” Rindfleisch’s pieces are for singers. “They have crunchy dissonances, but they’re tuneful and approachable without being facile.” Asked to describe the composer’s style, McGuire said it’s like trying to describe a wine. “You can say something like ‘it’s fruity and effervescent, but with notes of darker stone fruit and asphalt,’ but you wonder if anyone’s going to understand exactly what you mean by all those adjectives. Even when Andy’s music is very serious, there’s a certain exuberance to it. He writes like a virtuoso for voices, but his music is fun to sing — not easy, but fun to sing.”

At a moment like this, you’d expect a pre-concert lecturer to play an example, and Charles McGuire has a YouTube video at the ready. Take two-and-a-half minutes to listen to Cleveland Chamber Choir singing Andrew Rindfleisch’s “I’ve got an arrow” from Three Little Love Songs by Emily Dickinson here.

The cimbalom was the feature of the show, an instrument capable of taking on many personas. Its performer, Chester Englander, has shaped his career around the instrument, and has inspired composers to write more repertoire for it, some of which was presented on the program. END_OF_DOCUMENT_TOKEN_TO_BE_REPLACED

You wouldn’t expect that acoustic from a glance at the nave, which is wide and long, but not especially lofty. But when I guest conducted a local amateur choir and professional orchestra in Beethoven’s Mass in C there a few years back, during the first rehearsal we released the final chord of the “Gloria” and listened in astonishment for the next several seconds. The sound continued to roll down the space like the big wave that surfers dream about. END_OF_DOCUMENT_TOKEN_TO_BE_REPLACED