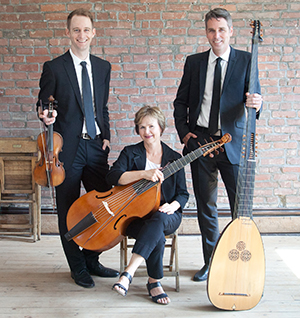 The more predictable big performances at the Baldwin Wallace Bach Festival each year take place on Friday and Saturday evenings, but the afternoons of those days offer more varied fare. For the 86th Festival, the organizers invited the Pittsburgh early music trio Chatham Baroque on Friday, and the Kenari Saxophone Quartet on Saturday, for programs that considered the legacy of J.S. Bach from two widely different points of view.

The hour-long program surrounded Bach’s Trio Sonata No. 3 in d with earlier works by Johann Rosenmuller, Philipp Heinrich Erlebach, Antonio Bertali, Heinrich Biber, and Dietrich Buxtehude, several of them from the stylus fantasticus period when free-ranging, improvisatory works that combined elements of the French and Italian styles were all the rage.

Rosenmuller’s Sonata Quarta in C is a good example of the style, with its succession of dissimilar ideas, surprising juxtapositions, and abrupt ending. Fouts made an immediate connection with the audience, grinning through the composer’s witty passages and playing with a kinetic verve perfectly matched by Culin-Ellison.

After joking about Erlebach’s surname (“Early-Bach,” he called the composer), Fouts parried delicious dance-tune phrases with Halverson in the Sonata Seconda in e, over chording provided by Pauley.

The ensemble played Bach’s own Trio Sonata in d, best known as the third of his six organ sonatas, with elegant lightness, then turned to the sunny music of Antonio Bertali for a beguiling reading of his Sonata a tre in a with organ continuo.

Andrew Fouts was in the spotlight for Biber’s Sonata V in e, an elaborate note-fest for the violin, and for which Halverson took up an elegant violone with striking, scalloped edges.

Buxtehude’s cheerful Sonata in G brought back the multi-sectioned format of the stylus fantasticus. The hour sped by in this delicious sampling of works Bach probably had in his ear when he was crafting his own pieces. 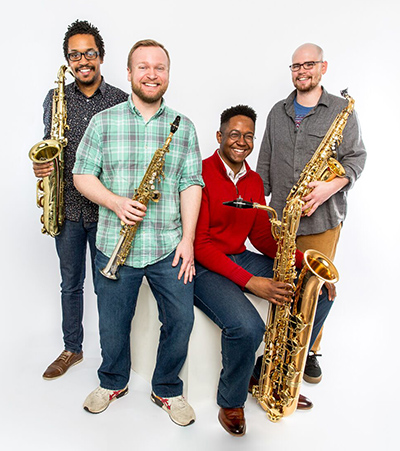 Malanska, an Oberlin grad who died last summer, went on to become especially famous for his compositions for wind ensemble. As we learned in a video made by his son, Malanska started his compositional day by playing and singing through one or more of Bach’s 371 Chorales. He based many of his own works on those Lutheran church hymns and on how Bach made use of them.

The Kenari — Bob Eason, Kyle Baldwin, Corey Dundee, and Steven Banks — arranged their program around two of Maslanka’s extended works: Recitation Book and Song Book. Not surprisingly, the inspiration for the composer’s engaging flights of fancy, and those tunes were sung from various locations in Gamble Auditorium by the Treble Choir or smaller ensembles from the group.

The Kenari were flat-out amazing. Kinetic, physical players, they came close to choreographing Maslanka’s music — especially when riffs were passed down through the ensemble from top to bottom and up again. Their instrumental mastery was impressive, their tone beautiful, their intonation faultless. Individual solos with Ryan provided a fine contrast to the ensemble pieces.

The printed program gave only a list of “Selections to be chosen from…” — and after a while, I stopped trying to figure out exactly what Maslanka piece we were hearing. I think the next-to-last selection was his Hymn Tune with Four Variations, which brought forth some stunning virtuosity from the Kenari. The concert ended slightly more than an hour after it began with a moving chorale, played by the Quartet at the edge of the stage and sung by the Treble Choir from the balcony.

END_OF_DOCUMENT_TOKEN_TO_BE_REPLACED

Franz Welser-Möst led the final bows on Saturday night at Severance, like the star of any show should. The Cleveland Orchestra’s music director is in his element presiding over the ensemble’s annual opera production, which this season packs the drama. Verdi’s Otello — in a concert staging that opened May 21 and runs for two more performances (May 26 and 29) — demands big voices, instrumental forces to match, and a conductor who can give it all shape and direction. END_OF_DOCUMENT_TOKEN_TO_BE_REPLACED

The cimbalom was the feature of the show, an instrument capable of taking on many personas. Its performer, Chester Englander, has shaped his career around the instrument, and has inspired composers to write more repertoire for it, some of which was presented on the program. END_OF_DOCUMENT_TOKEN_TO_BE_REPLACED