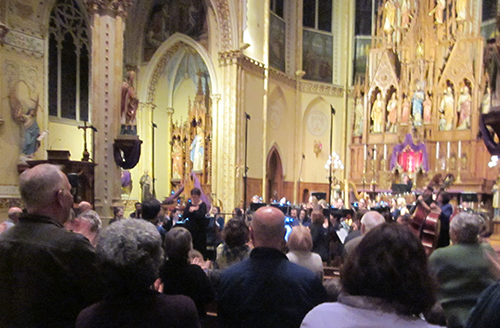 Bosnian composer and accordionist Merima Kljuo gave the Cleveland premiere of her work The Sarajevo Haggadah: Music of the Book at the Cleveland Museum of Art in 2015 in a version for accordion and piano. Last week she returned to Cleveland with her new, vibrant orchestration of the piece, which celebrates the miraculous journey of an elegant medieval Jewish prayer book from Spain to Bosnia.

Ključo and the 43 instrumentalists of CityMusic Cleveland, led by music director Avner Dorman, gave the elaborated piece a memorable performance on Saturday, March 17 at the Shrine Church of St. Stanislaus in the context of “Two Faiths: One Spirit,” featuring music of Jewish and Muslim origin and celebrating the connections between the two.

The dozen movements of Ključo’s piece begin by setting the cultural scene in 14th-century Spain when the codex was written and illustrated, and go on to chronicle the perilous itinerary of the Haggadah after the expulsion of the Jews in 1492. Among the book’s other adventures, it was saved from immolation in Venice during the early 17th century Inquisition by a Jesuit priest, then snatched just in time from the clutches of the Nazis in 1941 (a Muslim librarian smuggled it out and entrusted it to the care of an Imam who hid it in the library of a mosque). Its most recent history included its survival during the four-year Siege of Sarajevo, which began in 1992 — an event the composer lived through and vividly recalls in her music.

In addition to being a sensitive and versatile accordionist, Merima Ključo has a keen ear for musical color. Her choice of instruments and doublings gave a sense of immediacy and drama to the story, and Avner Dorman and CityMusic Cleveland played the piece masterfully.

Keening violins, themes built on middle-eastern scales, and repeated melodic gestures linked the movements together. The booming timpani and bass drum that signalled war and conflict made a particularly chilling effect in the lively acoustic of the church.

Friday’s concert began with Georgian-born composer Josef Bardanashvili’s Elegy (Psalm 22) for Strings, played as a tribute to CityMusic co-founder and trustee Clurie Bennis, who died unexpectedly early in January. Beginning with a simply harmonized, upward-trending scale, the brief but moving piece sounded at several points as though it wanted to segue into the Barber Adagio, perhaps making a musical tribute of its own.

The rest of the evening was devoted to music reflecting Syrian, Moroccan, and Iranian themes. Kareem Roustom’s Dabke is a version for string orchestra of a line dance melody from Syria, Lebanon, and Palestine. Tom Cohen’s arrangement of Warzazat (named for the Moroccan desert town of Ourazazate) incorporated traditional Arabic instruments into the ensemble after the fashion of the eastern-western orchestras that Cohen conducts. Both pieces filled the nave of St. Stanislaus with infectious rhythms

Behzad Ranjbaran’s Seven Passages, the finale and longest work on the second half, narrates the seven trials of the Persian hero, Rostam. Colorfully scored and cinematic in scope, the piece gave Dorman and CityMusic Cleveland a lot of impressive material to work with, and they brought it off dazzlingly.

One loose end in CityMusic Cleveland’s program was the subject of the Timbuktu manuscripts — mentioned at length in the program book and the subject of Joshua Hammer’s strikingly-titled book, The Bad-Ass Librarians of Timbuktu. These artifacts had similar near-death experiences to the Sarajevo Haggadah, but weren’t specifically linked to any of the music played. Never mind. Hammer’s book makes a good read in any case.

Franz Schmidt’s Symphony No. 4 showcased the ensemble, under guest conductor Jonathan Berman, in the standard conventions of a not-so-standard piece. But at the start of the program, the musicians were equal partners to pianist Cédric Tiberghien, whose playing could be as bold as the full orchestra or as intimate as any instrumental solo. END_OF_DOCUMENT_TOKEN_TO_BE_REPLACED

END_OF_DOCUMENT_TOKEN_TO_BE_REPLACED

Jackson began the program with a recitation of Langston Hughes’ poem “Helen Keller” — the first of five poems by Hughes that served as interludes between each piece on the first half. END_OF_DOCUMENT_TOKEN_TO_BE_REPLACED

Pianos with pins and tape on strings, a bass drum and tam tam, crotales, Almglocken, and vibes. Microphones were hooked up all around the instruments. The feed was sent to speakers around the room. Lighting designer Nicholas Houfek hung incandescent globes over the arrangement of instruments from thin black wires stretching across the beams. END_OF_DOCUMENT_TOKEN_TO_BE_REPLACED

From the podium, Elim Chan set an ambitious tone for the evening. The rising star conductor, here in her Cleveland Orchestra debut, has a commanding style, and every twist and turn in Saturday’s performance tracked closely with her baton. END_OF_DOCUMENT_TOKEN_TO_BE_REPLACED