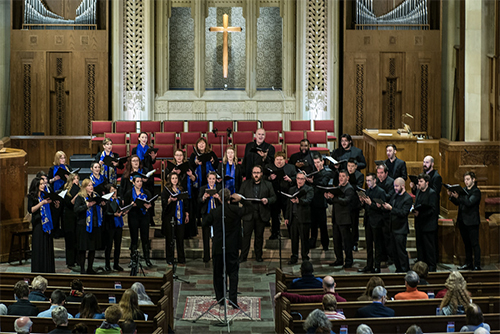 The concert began with a plainsong setting and an arrangement by C.L. Alwes of  Resonet in laudibus, a tune that with German text became a dialogue between Mary and Joseph (and women and men) in Hieronymus Praetorius’ Joseph lieber, Joseph mein.

The Medieval Marian hymn Alma redemptoris Mater appeared both in the clear, hefty polyphonic lines of Johannes Ockeghem’s motet and Cecilia McDowall’s six-part motet written in tribute to the earlier work, but in a variety of styles.

Having responded with equal sensitivity to contrasting styles of the old and new Christmas settings, Cleveland Chamber Choir shifted into celebratory mode with the Hanukkah music.

Andrew Rindfleisch’s Menorah Blessings (a premiere) are understated settings of three conjoined candle-blessing prayers from the first night of the Festival, set in the low range of voices, “coloring the text in such a way as to sound bathed in candlelight.” That image came across beautifully, juxtaposed with Blanche Chass’s exuberant setting for men’s voices of the traditional chant Hanerot Halalu.

Samuel Adler’s A Song of Hanukkah, a rhythmic arrangement of a folk melody, was closely followed by the premiere of Corey K. Rubin’s klezmer-infused arrangement of Mi Yimalel, enlivened by Julie Myers-Pruchenski’s tambourine and soprano Kristine Caswelch’s arresting, stratospheric cadenza at the end.

The program came to a conclusion with Jocelyn Hagen’s raucous arrangement of Deck the Hall, Joan Szymko’s pretty version of Stille Nacht featuring flutist Liz Root and violinist Marina Ziegler, and Lana Walter’s energetic Noel, Noel! MacPherson always has an encore waiting in the wings, this time an unabashedly popular one: Andy Williams’ 1963 holiday hit, The Most Wonderful Time of the Year.

Supported by engagingly, yet simple staging by Cara Consilvio, a well-prepared cast of singers told the archetypal story of Cinderella with charm and flair. Framing the production was  a sparse but colorful set and wonderful lighting by Dave Brooks. END_OF_DOCUMENT_TOKEN_TO_BE_REPLACED

END_OF_DOCUMENT_TOKEN_TO_BE_REPLACED

The music isn’t easy to play, either. Over the course of two hours, all of the musicians brought fantastic focus to the unrelenting tricky rhythms and countless layers of parts, all of which require a high level of individual responsibility. Even in the moments of calm, the accompaniment remains perpetually unsettled. Adams — who made a sprightly presence on the podium — combines minimalist, repeating motives in gradual layers, which eventually become so dense they overwhelm the senses. Lisa Wong deserves special mention for her thorough preparation of the Cleveland Orchestra Chorus, as does Jennifer Rozsa for the Children’s Chorus, which made a brief but memorable appearance in the last few minutes. END_OF_DOCUMENT_TOKEN_TO_BE_REPLACED