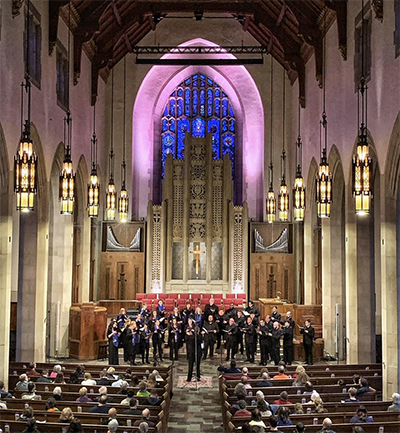 In his spoken introduction before the Cleveland Chamber Choir concert on Sunday afternoon, March 10, Charles Edward McGuire characterized the program as very difficult. The statement was true, but director Scott MacPherson and the Choir gave extraordinary and virtuosic performances of unaccompanied music by three masters of choral music — Johannes Brahms, Andrew Rindfleisch, and Benjamin Britten. First Baptist Church of Greater Cleveland was an ideal location, with resonant but not overly reverberent acoustics that flattered the group’s well-blended sound but didn’t muddy the musical textures.

The program began with Brahms. Der bucklichte Fiedler, Op. 93a, No. 1 is in the character of a lively folk song with several stanzas and occasional meter changes. The performance of Waldesnacht, Op 52, No. 3, was more restrained, with well-controlled legato and intonation, and a broad dynamic range. The bass section was notable here as well as later in the concert for their rare capacity to sustain very low notes. The Drei Gesänge, Op. 42, for six-part choir, were rich in texture, with beautifully crafted phrases and dynamics. The third of the songs, Darthulas Grabesgesang (“Darthula’s Song from the Grave”), was especially beautiful, its melancholy tone broken by a stanza in quicker tempo and an optimistic major key, only to return to minor at the end.

“Die Vogelrufe” (Birdcalls) is also rhythmic and more conventionally tonal, but often with chromatic harmony that might have been inspired by Brahms. The third piece, “An die Music” (To Music), is calm, with textures fading in and out. This movement especially benefited from the church’s acoustic — it would not have been as successful in a “dry” room. Midway through the work, the Choir perfectly voiced and balanced a series of chords in complex harmony. At the end the women’s voices hummed, as if echoing a very quiet unison note in the distance.

The men of the Choir sang Rindfleisch’s O Livoris Feritas, to a text about the sins of envy by Guillaume de Machaut. Its vocal techniques include speaking that transforms to singing, shouting, and improvisation. The music is often violent and intense, with phrases of extreme difficulty. At the end, it is as if the air is let out, and the music slides downward to a pianissimo conclusion.

The whole choir returned for a setting of Emily Dickinson’s I Sing to Use the Waiting, with particularly lush harmonies and quietly haunting textures. This was the most accessible of Rindfleisch’s three works.

The second half of the program was devoted to a stunning performance of Britten’s early work A.M.D.G., setting poems by Gerard Manley Hopkins. (The title is the abbreviation for the Jesuit motto Ad majorem Dei Gloriam — “To the Greater Glory of God.”)

Written in 1939, A.M.D.G. was not fully performed until 1984, and not published until 1989, thirteen years after Britten’s death. It is likely that during his life, there simply was not a choir capable of singing it.

In the first movement, “Prayer I,” the women’s entrance is very high and comes out of nowhere. The writing is chromatic and not intuitive. Britten did return to some of the work’s techniques and phrases in later works — it’s clear that he absorbed the experience of composing A.M.D.G. and applied that knowledge going forward.