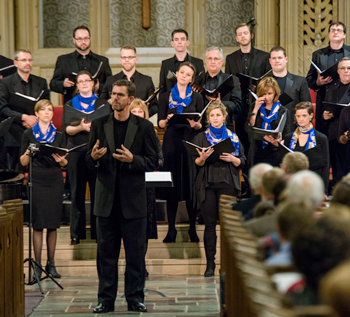 Maybe you’ve already begun filling out your 2018 NCAA March Madness bracket. But if making predictions about basketball isn’t your passion, why not turn to madrigals instead? Cleveland Chamber Choir director Scott MacPherson will join a reduced contingent of his singers in “March Madrigal Madness” in the Recital Hall of the Cleveland Museum of Art on Sunday, March 18 at 3:00 pm to present his own “Sweet Sixteen.”

“At the end of last season, we decided to expand slowly and offer a third program in 2017-2018,” MacPherson said in a telephone conversation. “We thought it would be fun to tie a March program into the NCAA tournament. We can’t really set up a 64-composer draw, but we want the concert to be interactive, so we’ll print the program in the form of a 16-song tournament bracket.”

MacPherson will invite the audience to vote on their favorite madrigal or part song by composers in four national categories — three of them from the 16th century and one from the 19th. The Italians are represented by Giovanni Gastoldi, Adriano Banchieri, Claudio Monteverdi, and Orlando di Lasso. French hopefuls include Clément Janequin, Garnier, and Josquin. Thomas Weelkes, Thomas Morley, and John Bennett represent English Renaissance madrigalists, and their Victorian imitators comprise Sir John Stainer, Joseph Barnby, and Henry Rowley Bishop.

“I’m not sure yet whether we’ll have the audience vote via ‘applausometer’ or a show of hands. It won’t be very scientific, but it’ll be fun,” MacPherson said, adding that he’s paring his ensemble down from 32 to 19 singers because of the intimate space. “And I’ll actually be singing instead of conducting.”

The lineup includes some of Scott MacPherson’s favorite pieces in the genre, like a sophisticated pair of madrigals by Weelkes:

Thule, the period of cosmography,
Doth vaunt of Hecla, whose sulphureous fire
Doth melt the frozen clime and thaw the sky;
Trinacrian Etna’s flames ascend not higher:
These things seem wondrous, yet more wondrous I,
Whose heart with fear doth freeze, with love doth fry.

The Andalusian merchant, that returns
Laden with cochineal and china dishes,
Reports in Spain how strangely Fogo burns
Amidst an ocean full of flying fishes:
These things seem wondrous, yet more wondrous I,
Whose heart with fear doth freeze, with love doth fry.

“You can’t help but be attracted by the first line,” MacPherson said, “and later to the piece’s rhythmic craziness and its chromaticism when the music refers to the volcanos.”

Other pieces are well-known to high school choristers, but in highly bowdlerized English versions. “I wonder if choral directors have ever looked deeply into the Italian texts of di Lasso’s Matona, mia cara,” he said, adding that Oberlin musicologist Charles McGuire may touch gently on that subject in his pre-concert talk.

It was McGuire who alerted MacPherson to a volume of choral songs published to honor Queen Victoria’s 80th birthday that the musicologist had consulted on a recent trip to England. That collection is the direct descendant of The Triumphs of Oriana, a set of 25 madrigals in honor of Elizabeth I published by Thomas Morley in 1601. MacPherson’s program includes John Bennett’s All creatures now are merry minded from the earlier collection, and Sir John Stainer’s Flora’s Queen from its Victorian counterpart.

Probably the most virtuosic work on Sunday’s program is Clément Jannequin’s Le chant des oyseaux. “You actually think you’re hearing birds,” MacPherson said. On the other end of the spectrum, Joseph Barnby’s Sweet and Low in the Victorian category is one of the simplest. “We call it ‘The Saccharine Song,’” he said, “but it’s a beauty.”

I asked Scott MacPherson what his own championship choice might be. “You wouldn’t reveal that, would you?” Certainly not! “But I’ll be very curious to see what the audience likes best,” he said.