After McGirr sent the email to CCC members notifying them of the May 2 cancellation and the Board’s intent to pay a partial fee, she immediately received messages from singers saying that they preferred to have the organization keep the money.

“Then someone asked if they could donate it to another singer who needed financial help,” McGirr said. “I thought that was an incredible idea. I quickly talked to the Board and sent another email telling people that if they wished to donate their fee to members in need, we would set up a fund for members to apply for assistance. Almost everyone responded saying yes, please donate my portion to this fund. The response was great, and we were able to help a couple of members at a significant level.” 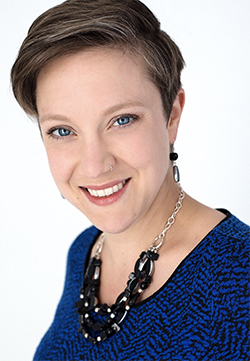 Soon after, it was suggested that they turn the fund into something larger that could help even more area musicians. Although she was not sure how to approach the logistical side of running such a fund, she found a great example in the Artist Relief Tree.

More than Music Artist Relief Fund assistance is available to anyone who is a performing musician residing in Cuyahoga, Lorain, Medina, Portage, and Summit Counties. “We plan to fulfill requests for a one-time-only grant of $100 on a first-come, first-served basis,” McGirr said. “We are not making any judgement about who has greater need — very simply, if you ask for it, we’ll give it to you.”

100% of funds will be distributed to artists as needed. No one working behind the scenes is collecting a percentage or cut of these donations. Likewise, CCC will not benefit from funds donated to this fund. A separate account line is managed for donations directed to CCC.

During a separate telephone conversation, Cleveland Chamber Choir founder and artistic director Scott MacPherson said that the More than Music Artist Relief Fund aligns with the organization’s mission of doing good works in the community. Portions of the donations collected at CCC concerts are often designated for charitable causes. “When Kira proposed the idea to the Board, it felt like a no-brainer and a win for everybody.” 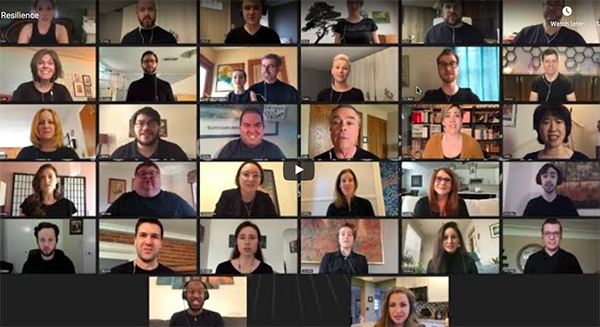 MacPherson is also happy that the establishment of the Fund coincides with the release of CCC’s first virtual choir video. Click here to watch a performance of Abbie Betinis’ Resilience. “The song is perfect for the times we are in,” MacPherson said. “The message is positive and it’s the kind of song that anybody can sing along with if they want to.”

MacPherson, who is also professor of music and director of choral activities at Kent State, said that when the University required all classes to be taught remotely, he began looking at ways to engage his students. And since there is currently no app that allows a group of people separated by distance to participate in real-time rehearsals, he enlisted the assistance of some “tech-savvy people” to create virtual performances with some of his Kent choirs. He thought, why not do the same with CCC? 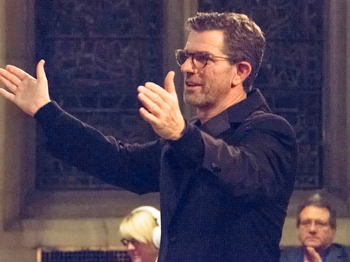 “Making the video was a lot more difficult than it appears, but given that Resilience has a strict tempo, Corey Fowler, who’s one of our members, had no difficulty making the click-track,” MacPherson noted. Fowler also created an audible countdown and midi files of each part on the piano as well as instructions for making each singer’s individual recording. “We wanted it to look like we were singing from home, so we told people to find the right atmosphere. I even got my 11-year-old daughter involved in mine.”

Once MacPherson received the recordings, he checked each one for rhythmic and musical accuracy and sent them to the audio/visual person who worked his magic. “He extracted the audio and equalized all of the tracks, then figured out how to put thirty-two singers on one screen — we didn’t want them to be lined up like a choir on stage. Finally he added some acoustics so it sounded better than people singing in their kitchen or living room. I must say that when I saw the first draft, I was already impressed.”

What does the future hold for Cleveland Chamber Choir virtual performances? MacPherson said to stay tuned for further announcements.

The cimbalom was the feature of the show, an instrument capable of taking on many personas. Its performer, Chester Englander, has shaped his career around the instrument, and has inspired composers to write more repertoire for it, some of which was presented on the program. END_OF_DOCUMENT_TOKEN_TO_BE_REPLACED

You wouldn’t expect that acoustic from a glance at the nave, which is wide and long, but not especially lofty. But when I guest conducted a local amateur choir and professional orchestra in Beethoven’s Mass in C there a few years back, during the first rehearsal we released the final chord of the “Gloria” and listened in astonishment for the next several seconds. The sound continued to roll down the space like the big wave that surfers dream about. END_OF_DOCUMENT_TOKEN_TO_BE_REPLACED