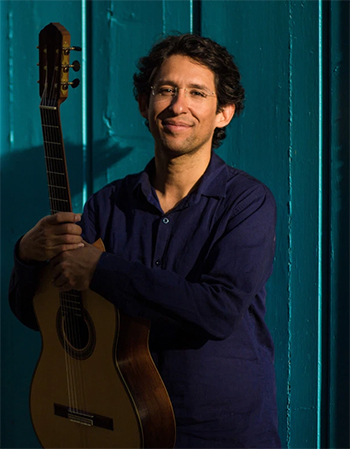 The Cleveland Classical Guitar Society continues to get it right. Where else can a listener applaud local high-school musicians and an award-winning professional soloist in the same evening, cheer a presenter for ensuring that said soloist could enter the country at all, and queue for tacos in the end? This all took place at Plymouth Church on Saturday, November 9.

Pablo Garibay, doubly rare as a star who started late and a guitarist known for concerto performances, made his Cleveland debut on the Guitar Society’s 2019-2020 International Series. According to executive director Erik Mann, the group had to enlist Congresswoman Marcia Fudge as an advocate in helping the Mexican musician obtain a visa for the visit.

CCGS foregrounds its educational activity, even in concerts. No exception, this evening began with an arrangement of a Mexican folk song as performed by the Cleveland School of the Arts Guitar Quartet. Impressive as individuals and harmonious as an ensemble, the students handled delicate harmonics, bright strumming, dynamic contrast, and percussive effects with both focus and a sense of fun.

Tuxedo-clad, always careful to tune and take a moment to think before plunging in, Garibay both looks and sounds meticulous. His strengths emerged in the first half: a concern for lifting important tunes out of dense textures, and a deftness in suddenly shifting tone.

A gorgeous melody splays out in “Canción de Cuna,” the first of Leo Brouwer’s Dos Temas Populares Cubanos, after a muted near-quotation of Bach. His right palm floating inches from the strings, Garibay chose individual notes here and there for emphasis: one came with a singing vibrato. “Ojos Brujos,” rendered with a deliberation that gave way to deepening passion, bore an after-the-fact dedication to Garibay’s eight-month-old daughter.

Simone Iannarelli’s The Last Coffee Together, informed by popular and film music, has a trick up its sleeve: its chord progression shifts in time whenever it recurs, reflecting changing emotions that accompany added experiences. Garibay made it all sound easy.

The first movement of Manuel M. Ponce’s Sonata III maintains suspense through harmony. Garibay added rhythmic tension as well. As elsewhere, he made sudden changes in timbre sound like pivots into alternate realities. In the second movement, the languid, songlike melody almost took a backseat to the intricate, finely wrought accompaniment figures. Soft humming sounds yielded to sharper tones in the third, despite Garibay making no apparent shift in physical motion.

Any audience member who had wondered how high the guitar could play learned in the first of Eguardo Angulo’s Dos Cadencias, which also contained tasteful percussive effects. The second section drifted along, before the time came for Garibay to play forcefully. His hands became a storm of strums, thorny arpeggios dropped in as though it were easier to play fast than loud.

Garibay established clear layers and maintained a tight focus on details in the first movement of Antonio José’s Sonata, and adopted a buzzing tone for the off-kilter dance of the second. A program note lists Ravel among José’s admirers, and one senses that the feeling was mutual. The influence of the elder artist bleeds through in the slow, anguished strums and funereal grace of the “pavana triste” that constitutes the third movement. An abrupt transition to the finale brought both fierce energy and wistful reminiscences of the first movement.

Garibay’s well-earned encore, a short piece in the style of Venezuelan harp music, bore a dedication to the elementary-school students that Garibay had worked with that week, as well as to the audience. The piece, no less beautiful for its mounting technical complexity, poured forth like much-needed sunshine.

Since The Cleveland Orchestra’s In Focus programs run about an hour each, it seems odd to label Alisa Weilerstein’s program of J.S. Bach’s six solo cello suites — three hours’ worth of music and commentary — merely as a “bonus” episode. Whatever the packaging, her recordings from Severance Hall that debuted on the Adella platform on February 18 add yet another distinguished set of performances to the many we’ve been able to enjoy over the years — and especially during the early days of COVID-19, when streaming performances of the Suites became something of a cottage industry among quarantining cellists. END_OF_DOCUMENT_TOKEN_TO_BE_REPLACED

END_OF_DOCUMENT_TOKEN_TO_BE_REPLACED

Their fourth subscription concert, Games and Grounds, which premiered on February 18 and will be available through March 1, finds the members of Les Délices in top form and, if anything, more communicative with their audience than ever before, thanks to the digital magic of Erica Brenner and her audio/visual production team that includes Elaine Martone, Andrew Tripp, and Mathias Reed. END_OF_DOCUMENT_TOKEN_TO_BE_REPLACED