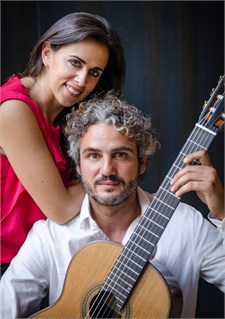 The guitar is an instrument that can travel anywhere and play just about anything. Listeners got the chance to take in some of that variety at the Cleveland International Classical Guitar Festival, which returned in person to the Cleveland Institute of Music last weekend. Original arrangements and inventive pairings — pieces with harp, cello, and more — added to the schedule, but a sense of what makes a performance “classical” emerged as well.

Studied expertise might be one answer. It was certainly the quality Duo Melis had in spades playing the Festival’s headlining concert on Saturday, June 4 in Kulas Hall. Husband-and-wife guitarists Alexis Muzurakis and Susana Prieto brought decades of musical knowledge to several cornerstones of the repertoire, while still leaving a little room to explore.

Joaquín Rodrigo’s Tonadilla served both as program opener and, more broadly, an introduction to the history of guitar duos. Rodrigo composed the three-movement work in 1960 for another couple, Alexandre Lagoya and Ida Presti, who in their day helped pave the way for virtuoso duet playing. The challenges and rewards of the ensemble come through in this composition. The strict groove both musicians lock into from the start gives way at certain moments to a freer, expressive style, which had Muzurakis playing passages as if they were improvised and Prieto keeping up a gentle accompaniment.

Astor Piazzolla perfected these sorts of contrasts in his Tango Suite, the showpiece that ended the evening. In all his writing, the composer had a knack for layering simple opposites — fast and slow, major and minor, rhythmic and rubato — to produce a complex result. Nowhere is this clearer than in his transitions, whether they’re within movements or between them. Sure enough, Duo Melis went from the melancholy atmosphere of the Andante to the aggressive spark of the final Allegro as if it were the most natural of shifts.

The pair showed the same innate understanding when it came to the less familiar selections. Their mastery of Miguel A. Roig-Francoli’s Sonata for Two Guitars was no surprise. Muzurakis and Prieto premiered the work in 2016, and the three movements they performed Saturday sounded polished and precise, even in sections punctuated by digressions and dissonant strumming.

Antoine de Lhoyer’s Duo Concertant, Op. 31, No. 2, could have been another piece crafted for the ensemble. The 19th-century score fit the two players to a T  (Lhoyer himself was a guitarist), with Prieto taking a turn at shaping the melody of the first part while Muzurakis accompanied.

Even the music not originally for guitar seemed perfectly suited to the Duo. A pair of harpsichord pieces by Joseph-Nicolas-Pancrace Royer — L’Aimable and Le Vertigo — translated without a hitch, both instruments sharing that metallic sound of plucked strings. An arrangement of “June” from Tchaikovsky’s The Seasons went in a different direction, adapting the piano line to the guitarists’ idiom. Prieto handled the melody again, adding tons of rubato right from the start, almost as if this were a slow movement Rodrigo or Piazzolla could have written.

END_OF_DOCUMENT_TOKEN_TO_BE_REPLACED

Rodgers & Hammerstein’s Cinderella was originally produced for television in 1957 — seven years after the animated Disney film was released — and starred Julie Andrews. According to the Rodgers & Hammerstein website, it was viewed by over 100 million people. END_OF_DOCUMENT_TOKEN_TO_BE_REPLACED

The story line has its origin in an 1855 play and an 1842 farce that Thornton Wilder mined for his 1938 play The Merchant of Yonkers. When that turned out to be a flop, in 1954 Wilder made the crucial decision to re-center the show around the character of the legendary marriage broker Dolly Gallagher Levi and renamed it The Matchmaker. END_OF_DOCUMENT_TOKEN_TO_BE_REPLACED

The Dodero Center for the Performing Arts at the Gilmore Academy in Gates Mills is one feature of an impressive campus. The auditorium is shallow, the stage is deep, and the ensemble played without a shell. Throughout the program, the sound, especially in instruments’ lower registers, tended to disappear. END_OF_DOCUMENT_TOKEN_TO_BE_REPLACED