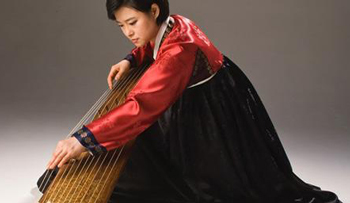 Winding down their exhibit on the Korean still-life paintings known as chaekgeori, the Cleveland Museum of Art presents Ji Aeri, a virtuoso on the zither-like kayagum. This program of traditional and contemporary Korean music on Sunday, November 5 at 2:00 pm in Gartner Auditorium is free, but tickets are required.

Ji Aeri teaches at Seoul National University and is internationally recognized for her immaculate and sensitive readings of music both old and avant-garde. “It’s so nice to present tradition and modernity at the same time in this concert,” she wrote in a recent email conversation.

Her interest in the kayagum actually has roots in another art form. She learned Korean traditional dance at age 5, joined the National Center for Korean Traditional Performing Arts at 10, and found that the instrument was simply everywhere. “The longer I play the kayagum,” she said, “the deeper I fall into the charms of the instrument. It casts out the sound of the heart by the player’s hand.”

Works by one of Ji’s former teachers, Hwang Byungki, will make up the first half of Sunday’s program. That kayagum master is known for cultivating the instrument’s contemporary repertoire and for his role in disseminating traditional Korean music in the West, a mission that’s important to Ji as well. “Playing kayagum is my life, and I want to convey its beautiful sounds all over. I want the world to be peaceful — without fighting or struggle but with understanding and love — and I hope the kayagum can serve as a tool to achieve that.”

Ji will match the modern repertoire of Hwang Byungki to a modern kayagum, sporting seventeen nylon strings. Then she’ll turn to a folk kayagum with twelve silk strings for the second half, featuring a type of traditional music known as kayagum sanjo. “I love this style so much,” she said, “and I want the world to hear it.”

The kayagum first appeared around the 5th century, but neither the modern nor the folk instruments that Ji plays on Sunday will be more than 30 years old. That reveals an important difference between performance practice of kayagum and Western string instruments. “We don’t play kayagum with old masterpieces like a Stradivarius,” she said.

Playing on the closing day of the chaekgeori (pronounced check-oh-ree) exhibit, Ji said she enjoys performing in museums and art galleries. “I can feel the many stories and the energy from the artworks. I especially like the rich emptiness of Korean traditional paintings and often find a relationship between them and my kayagum.”

Ji had one last note for audiences about listening to Korean music. “Western music fills space with vertical chords and horizontal melodies. In comparison, Korean traditional music provides rich, free space to both the player and listeners so that the participants can feel for one another within the flow of music.” About sanjo kayagum, she said it begins very slowly before raising in tempo and emotion. “I recommend that you entrust yourself to the music,” she said. “Then you can feel your soul lifted with it. When I play, I always focus on the internal flow in the music at that moment. I hope the audience can discover that special, mysterious secret of the music.”

Jackson began the program with a recitation of Langston Hughes’ poem “Helen Keller” — the first of five poems by Hughes that served as interludes between each piece on the first half. END_OF_DOCUMENT_TOKEN_TO_BE_REPLACED

Pianos with pins and tape on strings, a bass drum and tam tam, crotales, Almglocken, and vibes. Microphones were hooked up all around the instruments. The feed was sent to speakers around the room. Lighting designer Nicholas Houfek hung incandescent globes over the arrangement of instruments from thin black wires stretching across the beams. END_OF_DOCUMENT_TOKEN_TO_BE_REPLACED

From the podium, Elim Chan set an ambitious tone for the evening. The rising star conductor, here in her Cleveland Orchestra debut, has a commanding style, and every twist and turn in Saturday’s performance tracked closely with her baton. END_OF_DOCUMENT_TOKEN_TO_BE_REPLACED