While opera often treats its audiences to spectacle on a grand scale, what really makes the art form take flight is the melding of distinguished singing with excellent acting and staging. Those elements came together beautifully in Cleveland Opera Theater’s production of Verdi’s La traviata on Sunday afternoon, April 28 at the Maltz Performing Arts Center. A strong cast and a fine chamber orchestra joined director Scott Skiba and conductor Domenico Boyagian in bringing the story of Violetta Valéry to vibrant life on an engagingly human scale.

The dynamic duo of Skiba and Boyagian could probably turn a parking garage into a temporary opera house with just a few magical strokes. At the Maltz, swags of fabric draped over aluminum scaffolding, tables and chairs (often moved by cast members), and a couple of raised side platforms defined the performing space and focused attention on the center of the venue’s wide stage. An ersatz pit at floor level brought the orchestra out into the open, but with their forces whittled down into a chamber orchestration, instrumentalists balanced well with singers all afternoon. 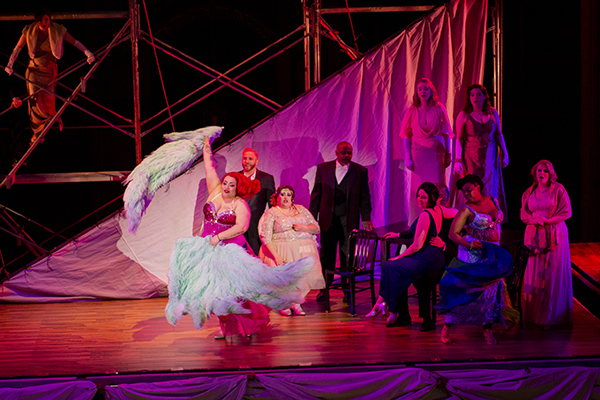 Social gatherings are important in Traviata, and Skiba knows how to give a good party. His handling of the crowd at the top of the show when Violetta first meets Alfredo, and his staging of the more boisterous gathering in Flora’s home in the second act were spirited in different ways — Flora’s spiked with cameo appearances by the outrageous Belia Sinm, Kimmy Katarja, and Lady Slay of Cleveland Burlesque. Skiba’s eye for detail serves him well in managing multiple bodies. 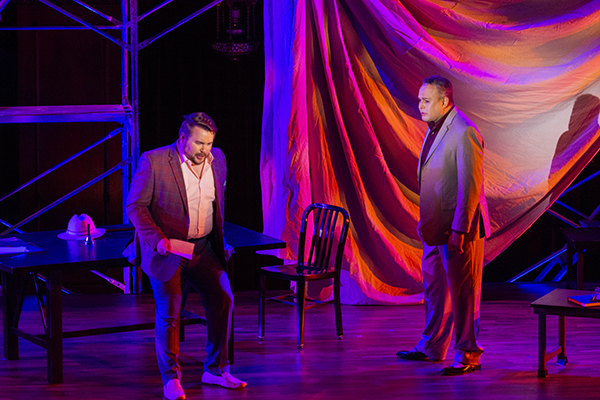 Verdi gives Violetta the opportunity to introduce herself and her philosophy of love early on, and Angela Mortellaro made a big splash with her first-act show-stopper, “Sempre libera.” At the end of the opera, she was equally compelling in her final deathbed aria — if just a bit too robust for a dying woman.

Tenor Benjamin Werley established both his singing and acting creds at the same party, portraying Alfredo Germont as an earnest and ardent character. Speaking of introductions and first impressions, when we first met the outstanding baritone Grant Youngblood, it was clear that Alfredo’s father was going to figure as a real, flesh-and-blood element in the plot rather than the usual cardboard character. Youngblood’s voice was as alluring as his stage presence. 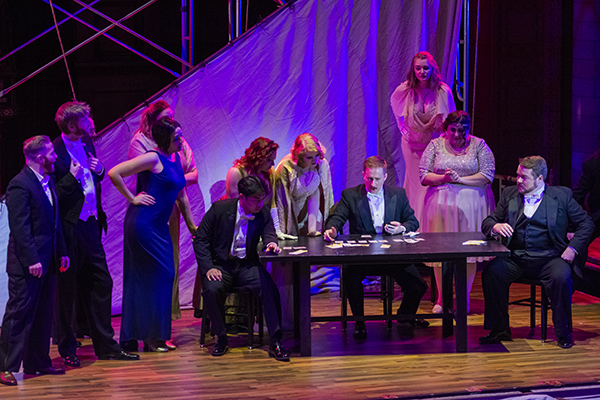 Boyagian paced the production with his customary sixth sense, drawing fine playing from the orchestra and excellent ensemble from the singers. His enthusiasm was matched by his entrances to the “pit” — he literally jogged the considerable distance between the side doors and the podium each time. 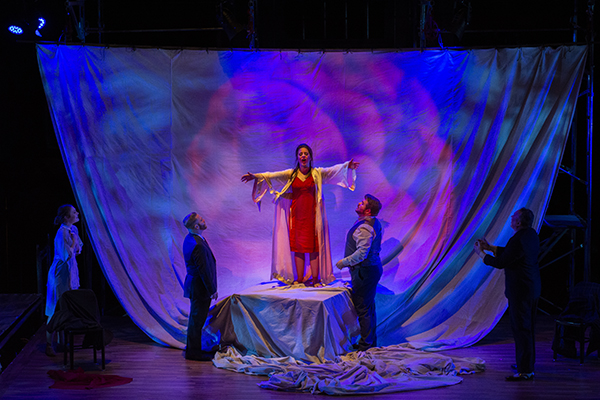 The music isn’t easy to play, either. Over the course of two hours, all of the musicians brought fantastic focus to the unrelenting tricky rhythms and countless layers of parts, all of which require a high level of individual responsibility. Even in the moments of calm, the accompaniment remains perpetually unsettled. Adams — who made a sprightly presence on the podium — combines minimalist, repeating motives in gradual layers, which eventually become so dense they overwhelm the senses. Lisa Wong deserves special mention for her thorough preparation of the Cleveland Orchestra Chorus, as does Jennifer Rozsa for the Children’s Chorus, which made a brief but memorable appearance in the last few minutes. END_OF_DOCUMENT_TOKEN_TO_BE_REPLACED

Warner was a fitting choice not just symbolically, but also sonically. The combination of Baroque strings, theorbo, harpsichord, and organ created a nice blend and balance, allowing the opportunity for softer instruments to stand out. In Johann Rosenmüller’s Sonata à 5 in g, Doug Balliett’s violone pizzicatos resonated beautifully, and in Johann Heinrich Schmelzer’s Sonata in d, harpsichordist Elliot Figg became an equal player in the texture with his clever improvisations. The slight exception was Joshua Stauffer on theorbo — despite the instrument’s big physical presence on stage, he received little time in the spotlight. END_OF_DOCUMENT_TOKEN_TO_BE_REPLACED