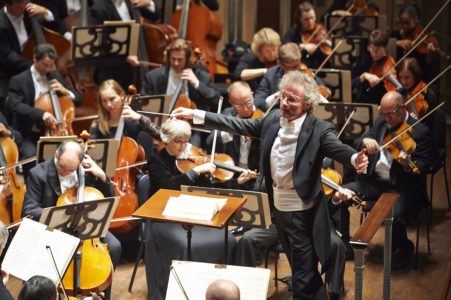 There would be lots of musical benefits if time travel ever became a reality. You could go back and ask J.S. Bach some pertinent questions, find out what really happened at the premiere of The Rite of Spring, and experience the music of Ottorino Respighi with fresh ears before his spectacular orchestral extravaganzas got appropriated by Hollywood.

Never mind. They still make a dazzling impression, and after intermission last Thursday evening, October 6 at Severance Hall, the Cleveland Orchestra audience got to hear all three of his Roman tone poems — Festivals, Fountains, and Pines — in one sitting, led by music director Franz Welser-Möst. It all added up to a riot of color and rich orchestral textures, bolstered by six busy percussionists plus timpani, crowned twice with the thrill of antiphonal brass, and pumped up occasionally by the profound tones of the Skinner organ.

Roman Festivals conjures up, in order, the ancient “games” of Nero’s reign in the Circus Maximus, the songs of Christian pilgrims, the October Wine Harvest, and the festive pandemonium in the Piazza Navona on the eve of Epiphany.

Fountains of Rome, the earliest of the triptych, celebrates four terminals of the famous aqueducts of the Eternal City, restored with elaborate statuary by 17th and 18th century pontiffs. Beginning with the fountains of Valle Giulia at Dawn and progressing to the Triton Fountain later in the morning, Respighi paints the scene surrounding Neptune’s chariot at the Trevi Fountain at midday, then winds up the day at the Fountain of Villa Medici at sunset.

Pines of Rome, written between Fountains and Festivals, imagines children playing in the grove of Villa Borghese, the somber entrance to a catacomb, the full moon shining on the trees of the Janiculum Hill, and finally, dawn on the Appian Way with the imagined vision of an ancient Roman army advancing toward the Capitol.

All of these scenes, vividly captured in Respighi’s music, were superbly brought to life by The Cleveland Orchestra, including some wonderful solo playing. Violinist Mark Dumm swapped his fiddle for a mandolin to add a special effect to the Wine Festival. Principal trumpet Michael Sachs crooned soulfully offstage during the Pines as did onstage English hornist Robert Walters. Keyboardists Joela Jones and Carolyn Warner, along with a guest, played tag team for special effects, moving between piano (sometimes solo, sometimes four hands), celesta and organ. Among others, a guest hornist and clarinetist contributed distinguished solos.

And then there was the celebrated nightingale of the Janiculum. In a previous performance at Severance Hall, the bird held forth from the percussion section. On Thursday, she sang via a CD from the sound system — atmospheric to be sure, but perhaps just a bit out of scale.

The final din, enhanced by six brass players situated between the dress circle and balcony, was a total thrill. The audience went wild, and with good reason.

Beethoven’s compact and thoroughly charming Eighth Symphony opened the program,  a curious bedfellow to Respighi, but delightful on its own merits. Welser-Möst led a sensibly-paced performance that emphasized the work’s classical qualities. Joined by two liquescent horns, the evening’s guest clarinetist played flawlessly in the trio of the Minuet, which ends on an exposed high F. Only the finale came off disappointingly. It’s a curious piece, full of Beethoven’s nerdy humor (stacking up of thirds that rise and fall through the orchestra twice, and ending multiple times), and it should sound edgy and difficult. The Cleveland Orchestra tossed it off with nonchalance. They’re just too good.