A crowd estimated at 10,000 blanketed the lawn and filled the center section of the vast pavilion on Saturday evening, July 11, as The Cleveland Orchestra settled into its Blossom season. The program included striking performances of Olivier Messiaen’s L’Ascension and Ludwig van Beethoven’s Symphony No. 9 led by music director Franz Welser-Möst. That seemingly odd pairing of pieces added up to an evening of orchestral and choral ecstasy from two very different points of view.

Messiaen’s “four meditations symphoniques” date from the early 1930s, when the composer had recently graduated from the Paris Conservatory and had been appointed tenured organist at the Church of the Trinity in Paris. Suffused with Catholic mysticism, the suite paints pictures of the ascension of Christ in movements headed by quotations from the Gospel of John, the Mass texts for the Feast of the Ascension, and Psalm 47.

The orchestration is unusual. The opening movement, “Majesty of Christ Asking for Glory from His Father,” is scored for brass and winds alone, while the last, “Prayer of Christ Ascending to His Father,” is reserved for the strings. The second, “Serene Alleluias of a Soul Desiring Heaven,” is a wonderfully lyrical movement that begins with an exotic unison theme later repeated by the English horn emerging out of a cloud of hazy strings. The third, “Alleluia on the trumpet, Alleluia on the cymbal,” is replete with colorful fanfares and dance rhythms. 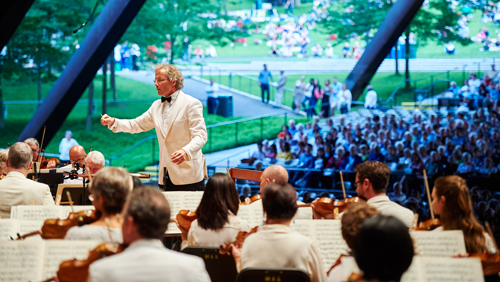 L’Ascension is early, but unmistakably Messiaen, even without the bird song and Hindu rhythms that characterize his later works — though as if on cue, a few Blossom birds made tuneful forays into the pavilion, while a distant train horn mysteriously matched pitches with wind chords. Welser-Möst led a beautifully-paced performance of a work that deserves more frequent hearings in its orchestral version (the composer turned it into a better-known organ work in 1934, swapping out its third movement for a new one.) The ultra-slow ending was magical as the string chords rose upward and finally disappeared into the rafters. 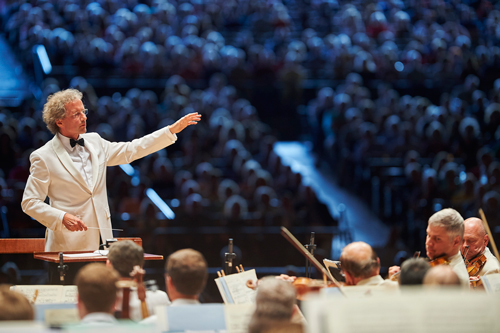 The last movement of Beethoven’s ninth symphony, which sets parts of Friedrich Schiller’s 108-line poem An die Freude, invokes an entirely different world-view: it’s a joyful hymn to universal brotherhood that finds its inspiration in the natural world, a reflection of the “guten Geist” who dwells above the starry canopy of heaven.

But there’s a lot of symphony to be experienced before we first hear the word “Freude!” The mysterious, minor-key murmurings and jagged themes of the opening movement that remain curiously unresolved (even in a triumphant major-key episode) lead to a stirring scherzo (minor-key again, with major-key interludes) and a long, lyrical slow movement interrupted twice by fanfares, the second time plunging into an unexpected key. Then — something that must confuse first-time listeners — Beethoven lets loose with a harsh chord, only to revisit the beginnings of the first three movements, discarding each of them in favor of a burgeoning melody that inspires the famous choral movement that follows. 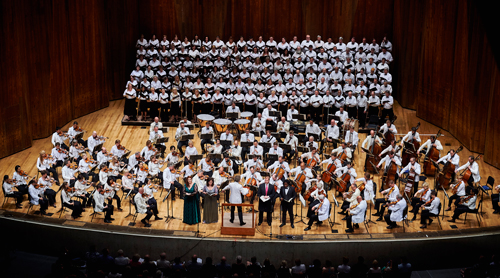 Welser-Möst adopted a brisk pace for the entire symphony — one that admirably lightened its textures but frequently challenged soloists and sections of the orchestra to fit in all the notes. That included both the solo quartet and the Blossom Festival Chorus once the “Ode to Joy” got underway, but the excitement the conductor’s tempos whipped up was infectious.

Bass-baritone Dashon Burton made a fine impression with his opening solo, later combining with soprano Tamara Wilson, mezzo-soprano Nancy Maultsby and tenor Stuart Skelton into a powerful vocal quartet. The chorus, prepared under Robert Porco, sounded jubilant, holding its own against the full orchestra throughout a sometimes wild ride. 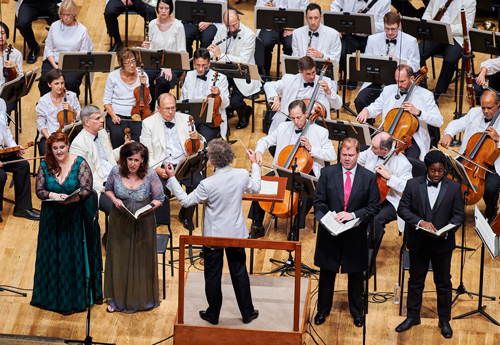 There were any number of moments in the ninth where Welser-Möst might have swooped down from 10,000 feet to take a closer look at some of Beethoven’s details, but perhaps that’s a more appropriate sport to be played indoors during the winter. Perfect weather, a huge audience, and the peripheral sounds of nature made TCO’s Blossom opener a memorable experience, even if some of the music went by in a blur.

END_OF_DOCUMENT_TOKEN_TO_BE_REPLACED

Rodgers & Hammerstein’s Cinderella was originally produced for television in 1957 — seven years after the animated Disney film was released — and starred Julie Andrews. According to the Rodgers & Hammerstein website, it was viewed by over 100 million people. END_OF_DOCUMENT_TOKEN_TO_BE_REPLACED

The story line has its origin in an 1855 play and an 1842 farce that Thornton Wilder mined for his 1938 play The Merchant of Yonkers. When that turned out to be a flop, in 1954 Wilder made the crucial decision to re-center the show around the character of the legendary marriage broker Dolly Gallagher Levi and renamed it The Matchmaker. END_OF_DOCUMENT_TOKEN_TO_BE_REPLACED

The Dodero Center for the Performing Arts at the Gilmore Academy in Gates Mills is one feature of an impressive campus. The auditorium is shallow, the stage is deep, and the ensemble played without a shell. Throughout the program, the sound, especially in instruments’ lower registers, tended to disappear. END_OF_DOCUMENT_TOKEN_TO_BE_REPLACED