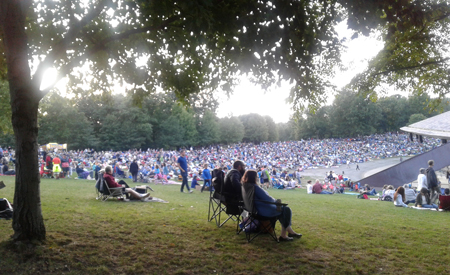 Anyone who’s still roasting that old canard about the elitism of classical music should have witnessed the scene at Blossom on Saturday evening, August 26. The immense crowd that gathered on the lawn and in the pavilion had turned out to hear The Cleveland Orchestra doing what it does best — playing great works in the orchestral repertoire with depth and brilliance, on this occasion under the Romanian-born guest conductor Cristian Măcelaru and with the German-Italian violinist Augustin Hadelich.

The big draw, of course, was Gustav Holst’s The Planets, but the audience was just as attentive to — and seemingly as thrilled by — Antonín Dvořák’s Violin Concerto in the first half of the program.

Not so frequently heard as other violin showpieces, the Concerto is something of a strange animal. It begins with bold orchestral gestures that threaten to overpower the responses from the soloist, then wanders however charmingly through a succession of lyrical melodies without a clear architectural purpose. The best of those are generally Czech-sounding, and with Dvořák, a folk dance is often just on the verge of breaking out.

Hadelich played both forcefully and sweetly, singing out high lines and showing off his fine technique in some passages that resembled etudes. His dialogue with a pair of horns playing in thirds at the end of the second movement was especially lovely. The catchy finale, finally a real furiant, brought the Concerto to a merry conclusion that had the audience on its feet. 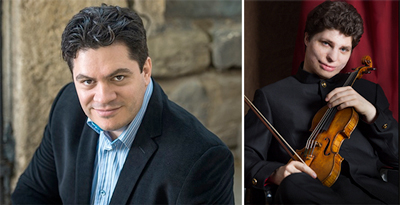 Hadelich responded with Paganini’s Caprice No. 24, which fit nicely into the evening’s relatively short program and gave the soloist ample opportunity to demonstrate his impressive violinistic chops.

Măcelaru and the Orchestra gave Holst’s astrological suite a stunningly paced, flawless performance from the hair-raising brutishness of “Mars, The Bringer of War” right through to the veiled mystery of “Neptune.”

Holst was a trombonist, and the heritage of British brass bands inspired many of the composer’s orchestrational decisions, but The Planets also fields a number of exotic instruments for its special effects. Bass flute, bass oboe, and tenor tuba all contribute special moments to the score, and Holst’s two independent harp parts and clever use of percussion and organ (with its rumbling 32-foot stops) lend extra detail to the texture. Every section of the Orchestra distinguished itself.

The most atmospheric effect is the offstage female chorus, who add an extra halo of mystery to the final moments of “Venus.” The thirty women’s voices of the Blossom Festival Chorus, including some members of the Cleveland Orchestra Youth Chorus, sounded weightlessly wonderful, their gradual decrescendo to nothingness allowing for a long moment of pure silence at the end.

Presiding over all of these planetary images was a sliver of moon, almost the reverse image of the partial solar eclipse early in the week.

Franz Welser-Möst led the final bows on Saturday night at Severance, like the star of any show should. The Cleveland Orchestra’s music director is in his element presiding over the ensemble’s annual opera production, which this season packs the drama. Verdi’s Otello — in a concert staging that opened May 21 and runs for two more performances (May 26 and 29) — demands big voices, instrumental forces to match, and a conductor who can give it all shape and direction. END_OF_DOCUMENT_TOKEN_TO_BE_REPLACED

The cimbalom was the feature of the show, an instrument capable of taking on many personas. Its performer, Chester Englander, has shaped his career around the instrument, and has inspired composers to write more repertoire for it, some of which was presented on the program. END_OF_DOCUMENT_TOKEN_TO_BE_REPLACED

You wouldn’t expect that acoustic from a glance at the nave, which is wide and long, but not especially lofty. But when I guest conducted a local amateur choir and professional orchestra in Beethoven’s Mass in C there a few years back, during the first rehearsal we released the final chord of the “Gloria” and listened in astonishment for the next several seconds. The sound continued to roll down the space like the big wave that surfers dream about. END_OF_DOCUMENT_TOKEN_TO_BE_REPLACED