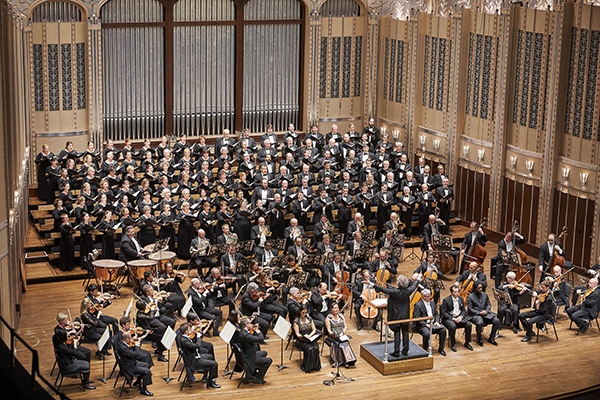 The Cleveland Orchestra Chorus and pianist Mitsuko Uchida were featured in Thursday evening’s concert at Severance Hall on May 16, the chorus in Schubert’s great Mass in E-flat, the pianist in Bartók’s Third Piano Concerto — works that came at the very end of each composer’s time on earth. At some 50 minutes in duration, Schubert’s setting is as difficult to imagine performing in a church context as Beethoven’s Missa Solemnis. Even the most imaginative ecclesiastical choreographers would be hard-pressed to match such extended music with liturgical actions. (Is there enough incense in Vienna?)

As a concert work, the E-flat mass is glorious, as full of memorable tunes as any piece Schubert wrote. And as a composer who built his structures out of melodies rather than motives, instead of developing themes, he usually found ways to repeat them. Probably not a few audience members went away from this performance well-supplied with Ohrwurmen to replay in their heads for the next few days.

A case in point is the lovely “Et incarnatus est” of the Credo, warmly initiated by tenor soloists Werner Güra and Matthew Plenk and later joined by mezzo-soprano Tamara Mumford.

The choral forces sing nearly continuously, and the Cleveland Orchestra Chorus, prepared by Lisa Wong, did themselves proud in a wide spectrum of choral sound ranging from the hushed petitions of “Kyrie eleison” to the triumphant proclamations of “Et Resurrexit.” And Schubert ends both the Gloria and Credo with lengthy fugues whose intricate counterpoint rang out clear and strong from over a hundred voices.

Schubert also prominently features the winds of the orchestra — the Harmonie in German — and the ensemble sound of the Cleveland Orchestra musicians positively glowed. 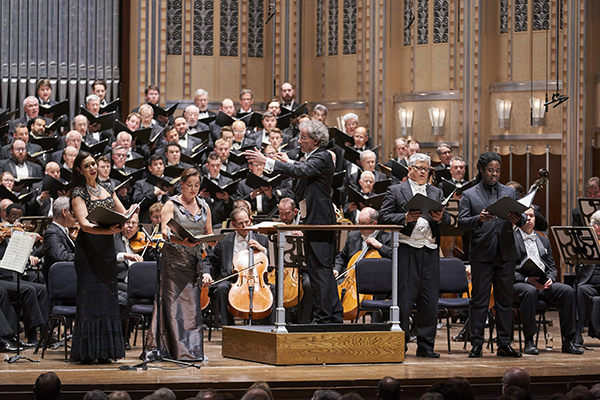 Apart from that wonderful trio in the Credo, the quintet of soloists had little to do until soprano Martina Janková and bass-baritone Dashon Burton joined Güra and Plenk in the gorgeous Benedictus. In the Agnus Dei, which ends with a long “dona nobis pacem” passage, Janková effortlessly pulled high B-flats out of the air at the beginnings of phrases.

Welser-Möst, who contributed his own extensive notes to the program book, obviously cherishes Schubert’s Mass, and led a heartfelt performance. 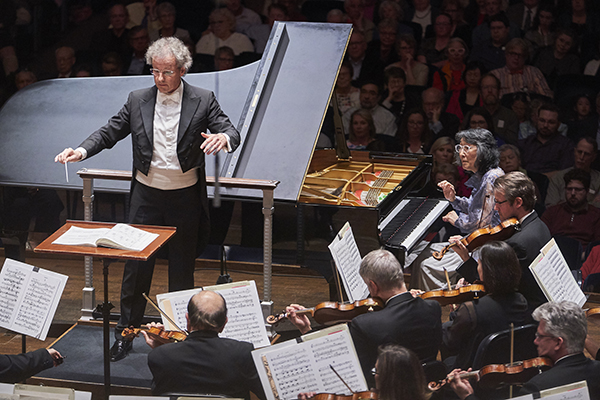 Bartók succumbed to leukemia before completing the final seventeen bars of his Third Piano Concerto, leaving his friend Tibor Serly to complete it from sketches, and his student and friend György Sándor to premiere it instead of his widow, Ditta Pástory-Bartók.

On Thursday, the soloist was a Severance Hall favorite, Mitsuko Uchida, who usually brings Mozart concertos along with her on her visits. The third Bartók Concerto — neoclassical, lyrical, and generally well-behaved in contrast to the composer’s earlier, edgier works in the form — doesn’t fall far from a Mozartean aesthetic, and fit hand-in-glove with Uchida’s expertise.

The first movement finds orchestra and soloist switching back and forth between important thematic material and filler, while the second, inspired by the Heiliger Dankgesang of Beethoven’s Op. 132 Quartet, yields its solemnity to the sounds of birds and insects in recognition of the composer’s fondness for the natural world. The finale ends strong, featuring a whimsical fugue initiated by the pianist’s left hand. 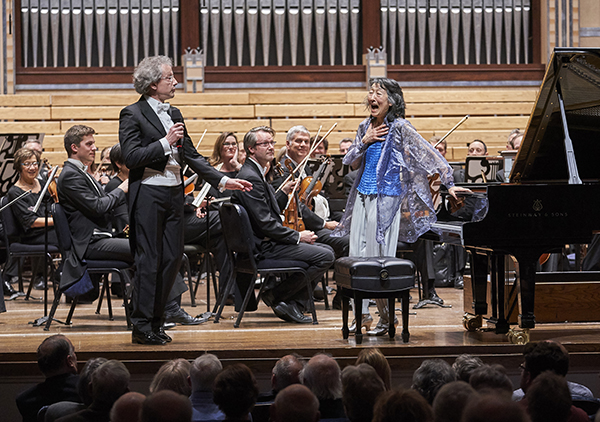 Uchida, Welser-Möst, and the Orchestra turned in an alternately lyrical and brilliant performance, relaxed but tight in ensemble. Afterwards, the conductor noted that this evening marked Uchida’s 100th performance with The Cleveland Orchestra, and presented her with framed pages of her first and most recent concert programs. She responded with gracious remarks about her experience playing with the Clevelanders.

END_OF_DOCUMENT_TOKEN_TO_BE_REPLACED

Rodgers & Hammerstein’s Cinderella was originally produced for television in 1957 — seven years after the animated Disney film was released — and starred Julie Andrews. According to the Rodgers & Hammerstein website, it was viewed by over 100 million people. END_OF_DOCUMENT_TOKEN_TO_BE_REPLACED

The story line has its origin in an 1855 play and an 1842 farce that Thornton Wilder mined for his 1938 play The Merchant of Yonkers. When that turned out to be a flop, in 1954 Wilder made the crucial decision to re-center the show around the character of the legendary marriage broker Dolly Gallagher Levi and renamed it The Matchmaker. END_OF_DOCUMENT_TOKEN_TO_BE_REPLACED

The Dodero Center for the Performing Arts at the Gilmore Academy in Gates Mills is one feature of an impressive campus. The auditorium is shallow, the stage is deep, and the ensemble played without a shell. Throughout the program, the sound, especially in instruments’ lower registers, tended to disappear. END_OF_DOCUMENT_TOKEN_TO_BE_REPLACED