On Sunday, February 23, MTT brought along his Meditations on Rilke, six songs with texts by the German poet Rainer Maria Rilke, a long-standing project that took its final shape in 2019 and was premiered in San Francisco in January.

Mezzo-soprano Sasha Cooke and baritone Dashon Burton joined the Orchestra in the attractive, 35-minute cycle, which bears a resemblance to Mahler’s Das Lied von der Erde, although the Rilke cycle springs from a tale Tilson-Thomas’ father told him about a barroom pianist in Wyoming “whose musical meanderings over the years and his music had led them to unexpected places…”

Joela Jones channelled that pianist at the beginning of the piece on a coyly out of tune upright, introducing the autumnal “Herbsttag” or “October Day.” Burton was up first as soloist, humming, vocalizing and beautifully intoning the words (translations were projected above the stage). The movement ended with a jazzy cup-muted trombone (Robert Stout) and a piano postlude.

Cooke took over in “Ich lebe mein Leben” or “I Live My Life,” a restless movement graced by flute (Joshua Smith) and oboe (Frank Rosenwein) solos, and Burton returned for “Das Lied des Trinkers” or “The Song the Drunkard Sings” — a parallel to the Mahler cycle with an English horn solo (Robert Walters), a riot of woodwinds, and growling commentary from contrabassoon (Jonathan Sherwin).

The horn section and solo trumpet (Lyle Steelman) welcomed Cooke in “Immer wieder” or “Again, again!” as Joela Jones moved to a grand piano. Both soloists were involved in “Imaginäer Lebenslauf” or “Imaginary Biography,” the eventful Scherzo of this vocal symphony, which pulsed with rhythm.

The denouement came with the sixth song, “Herbst” or “Autumn,” featuring Burton, harp and flute solos, and later, a storm of mallets and bells, subsiding into a moment that much recalled Mahler’s fading “Ewigs.”

Sasha Cooke and Dashon Burton were ravishing soloists, easily sending their voices out above some complex orchestral textures. Predictably, Tilson Thomas’ writing reflects composers he admires — Copland and Bernstein on the American side, Berg and Mahler on the European — but never sounds derivative. He achieves a fine synthesis of styles that serves Rilke’s texts and is agreeable to listen to.

One question that persisted in several intermission conversations: whatever happened to that saloon pianist after the first song? No, two questions: what was the bit of opening shtick all about when the conductor’s baton ended up on the first viola desk and needed to be handed over? 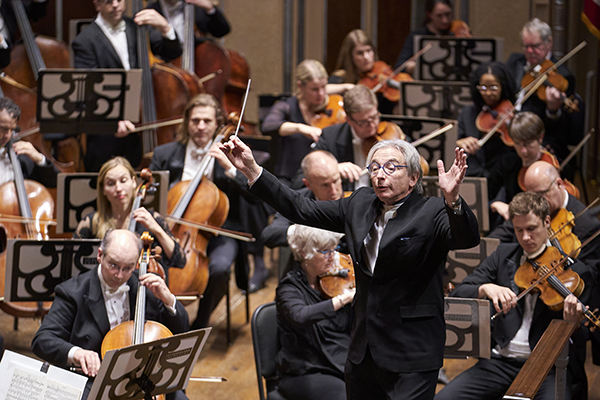 The rest of the program was devoted to a spacious reading of Berlioz’ opium-inspired Symphonie fantastique that was both hyper-dramatic and exquisitely detailed. Conducting from memory, MTT poked around in the corners of this popular work to bring out nuances that often go unnoticed but in this performance added extra layers of meaning.

English hornist Robert Walters and offstage oboist Jeffrey Rathbun called back and forth poignantly as shepherds in the ranz des vaches movement, the bassoons and later the brass were glorious in the March to the Scaffold, and E-flat clarinetist Daniel McKelway set the tone for a raucous, cackling sabbath of witches in the finale. The church bells, though played offstage, added to a clangorous din — and we hear a rumor that the Orchestra is adding even more bells to its collection. 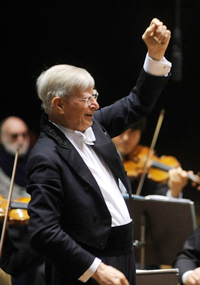 On Thursday, February 27, Herbert Blomsted’s guest appearance with the Orchestra lasted a mere 70 minutes, but that just-over-an-hour concert was packed tight with Bruckner’s Fifth Symphony.

With a small, unopened score on his music desk and no baton in his hand, the 92-year-old Swedish conductor brought a canny sense of structure to Bruckner’s gargantuan work. Making the smallest of gestures — reserving more pointed motions to call out important accents —  Blomstedt gave his colleagues abundant space to let their sound bloom, while signaling subtle transitions that immediately changed the direction and progress of the music.

Bruckner means brass, and the Cleveland Orchestra players were burnished and flawless throughout. Alluring wind solos, especially from principal clarinet Afendi Yusuf at the beginning of the finale, decorated many episodes. And the entire ensemble shifted into its transparency mode to make the contrapuntal lines of the finale clear, both in its ambitious single and double fugues.

One of the prominent features of Bruckner 5 is the persistence of its big themes, and not a few patrons went away humming some of them enroute to the parking garage (or, especially resonantly, in the men’s room).

That was after an overwhelming ovation from the crowd, who brought Blomstedt back for multiple bows. Too bad the composer wasn’t around to enjoy the accolades he never received during his lifetime.

Jackson began the program with a recitation of Langston Hughes’ poem “Helen Keller” — the first of five poems by Hughes that served as interludes between each piece on the first half. END_OF_DOCUMENT_TOKEN_TO_BE_REPLACED

Pianos with pins and tape on strings, a bass drum and tam tam, crotales, Almglocken, and vibes. Microphones were hooked up all around the instruments. The feed was sent to speakers around the room. Lighting designer Nicholas Houfek hung incandescent globes over the arrangement of instruments from thin black wires stretching across the beams. END_OF_DOCUMENT_TOKEN_TO_BE_REPLACED

From the podium, Elim Chan set an ambitious tone for the evening. The rising star conductor, here in her Cleveland Orchestra debut, has a commanding style, and every twist and turn in Saturday’s performance tracked closely with her baton. END_OF_DOCUMENT_TOKEN_TO_BE_REPLACED