The Norton Memorial Organ in Severance Hall — one of E.M. Skinner’s finest concert hall instruments — enjoyed a rare moment in the spotlight at The Cleveland Orchestra’s opening concert on September 29, led by music director Franz Welser-Möst. In the hands (and under the feet) of Paul Jacobs, it played a starring role both in Aaron Copland’s Organ Symphony, and in a thrilling encore that brought the large audience spontaneously to its own feet.

The 1924 Copland work was the result of the composer’s studies with the famous French musical guru Nadia Boulanger, who played the solo part at its premiere with the New York Symphony in 1925. Copland aimed at treating the instrument like a section of the orchestra, rather than as a featured soloist or a means of adding extra heft and depth to climaxes — its role in orchestral literature ranging from Saint-Saëns to Mahler.

The work begins gently with an insinuating little phrase that gets passed like a rumor among solo instruments and the organ, gathering quiet intensity as it endlessly repeats itself. Bursts of brass and full orchestra and organ herald the nervous second movement scherzo, whose rhythmic complexity is a complete foil to what went before.

The Orchestra’s new principal viola, Wesley Collins, introduced himself by leading his section in the lean but consequential line that begins the third movement. That motive turns into a march with some spectacular organ outbursts.

Listeners who recognize Copland through his later Appalachian Spring and Billy the Kid voice might not guess the author of the Organ Symphony on first hearing, though most would agree that the piece is a signal accomplishment on the part of a young composer who had never heard his music realized by an orchestra before.

Jacobs is an elegant player whose every move at the console — located on the floor in front of the podium — was fluid and graceful, whether reaching out to pull or retire a stop, or winding up for a gigantic chord. His choice of colors blended wonderfully with orchestral timbres, and he played the symphony from memory, which is its own impressive accomplishment.

After several curtain calls and a little conversation with Welser-Möst, Paul Jacobs returned to the console for an encore. What he called “a little Bach” was Johann Sebastian Bach’s great Fugue in a-minor. Jacobs added just enough showmanship to this intellectually heady web of counterpoint to draw the audience deeply inside, finally grabbing onto the bench for a stunning performance of the pedal solo that acts as a cadenza. The crowd whistled and cheered.

The evening began with Charles Ives’s Symphony No. 3, “Camp Meeting,” a work whose three movements (Old Folks Gatherin,’ Children’s Day, and Communion) are larded with American Protestant hymn melodies. Mostly written in 1904, the work went unperformed until 1947, when it belatedly won a Pulitzer Prize. Though not as eccentric and edgy as some of Ives’s musical experiments, the performance on Thursday sounded blander than the notes on the page would suggest. 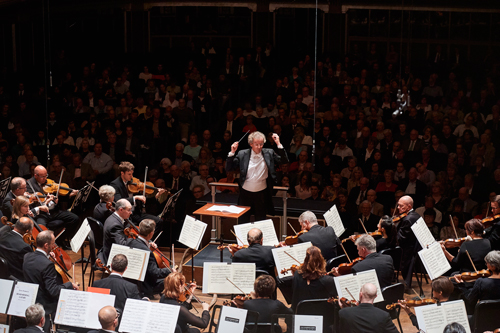 At the other end of the program, Sibelius’s second symphony received sonorous treatment from Welser-Möst and the Orchestra, more sumptuous in spots than a Finnish conductor and ensemble might have conceived it, but fresh-sounding and magnificent in its own right. Gorgeous string sounds, distinguished wind playing — despite a drastic weather change that affected a solo or two — and climaxes that were plentiful and powerful added up to an exhilarating performance. Younger than usual, and more numerous than usual for a Thursday evening, the audience gave Welser-Möst and the Orchestra a noisy ovation.

At intermission on Thursday, photographer Jennie Jones was on hand in the Green Room for an exhibit of her images of the Norton Organ restoration from 1998-2000 at the Schantz Organ Company’s workshop in Orville. Ten of the photos are to be mounted in the corridor leading to the organ chamber.

END_OF_DOCUMENT_TOKEN_TO_BE_REPLACED

Rodgers & Hammerstein’s Cinderella was originally produced for television in 1957 — seven years after the animated Disney film was released — and starred Julie Andrews. According to the Rodgers & Hammerstein website, it was viewed by over 100 million people. END_OF_DOCUMENT_TOKEN_TO_BE_REPLACED

The story line has its origin in an 1855 play and an 1842 farce that Thornton Wilder mined for his 1938 play The Merchant of Yonkers. When that turned out to be a flop, in 1954 Wilder made the crucial decision to re-center the show around the character of the legendary marriage broker Dolly Gallagher Levi and renamed it The Matchmaker. END_OF_DOCUMENT_TOKEN_TO_BE_REPLACED

The Dodero Center for the Performing Arts at the Gilmore Academy in Gates Mills is one feature of an impressive campus. The auditorium is shallow, the stage is deep, and the ensemble played without a shell. Throughout the program, the sound, especially in instruments’ lower registers, tended to disappear. END_OF_DOCUMENT_TOKEN_TO_BE_REPLACED