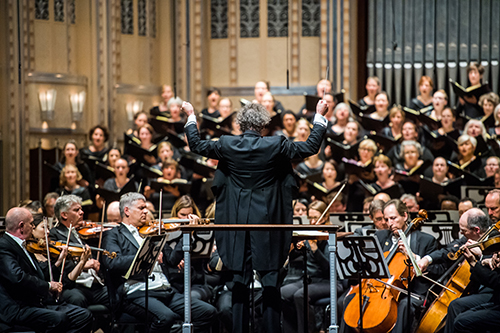 The Cleveland Orchestra’s Centennial Season came to a festive conclusion at Severance Hall on Thursday, May 17. After performing the first eight of Beethoven’s symphonies in four concerts between May 9 and 13, Franz Welser-Möst led the Orchestra, Cleveland Orchestra Chorus (prepared by Lisa Wong), and soloists Erin Wall, Jennifer Johnston, Norbert Ernst, and Dashon Burton in a blazing account of “The Ninth,” the final performance in Welser-Möst’s deeply philosophical Prometheus Project. (Read David Kulma’s reviews of the earlier concerts here.)

Beethoven principally earned his place in the Empyrean as a composer, but he is equally revered as a symbol of the Enlightenment — the movement that questioned traditional authority and believed that humankind could be transformed through the light of reason. Those two roles come together in the finale of the D-minor Symphony, where the composer sets radical ideas of Schiller — and a few of his own — to rousing and universally inspiring music.

In our day, the music of the Ninth Symphony has been so appropriated for other purposes — used as the Huntley-Brinkley news hour theme, quoted alarmingly in Clockwork Orange, smoothed out into a popular hymn tune, and declared the official anthem of the European Union — that it’s necessary every now and again to experience the whole work from start to finish to fully appreciate its emotional impact. 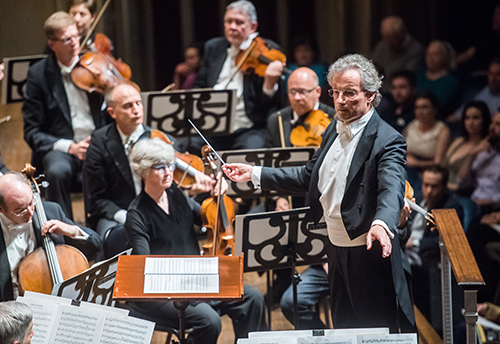 Thursday evening’s nearly full house had to wait a bit to do that. The 20-minute first half of the concert was devoted to a full string orchestra version of Beethoven’s Große fuge, an obsession of the composer — and apparently of Cleveland’s music director as well. The piece was originally intended as the finale of the string quartet Op. 130, until Beethoven’s publisher talked him out of it. If the intensity of its persistent, dotted rhythms was dissipated by using a large group of strings, that was compensated by sheer robustness of tone. And the work’s frequent octave doubling by the basses was powerfully enhanced by the deployment of Cleveland’s nine-man section — is there a better one anywhere? — across the back of the orchestra.

Even from the mysterious opening bars of the Ninth, it was clear that Welser-Möst was on a mission to bring out the inherent tension and drama of a movement so compelling that it inspired Anton Bruckner to poach some of Beethoven’s ideas for his own Ninth. This performance refused to dawdle, always wanting to move forward rather than relax and become expansive. 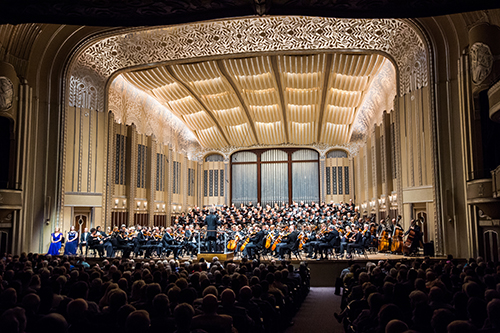 The Scherzo was equally forward-driven, partly at the expense of Beethoven’s sophisticated musical humor, but precise and exciting on its own terms. Wind solos by oboist Frank Rosenwein and hornist Carsten Duffin were neatly expressive, and the subtle grouping of phrases into varying patterns came through nicely.

Nor did the slow movement offer much of an opportunity for the Orchestra to luxuriate in winding melodies and sonorous harmony. The winds achieved a miraculous blend, and after the second occurrence of the fanfare motive, the cellos and basses actually made the arrival at a false cadence audible and important. 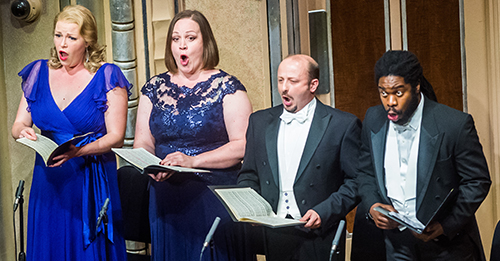 Welser-Möst cleverly minimized the arrival of the solo quartet by seating them on stage right before plunging into the dissonant chaos of the beginning of the finale. After the splendid low strings voiced their wordless recitative, bass-baritone Dashon Burton brought a singular sense of joy to his Freude’s.

From that point on, the Ode to Joy became a breathless, feuertrunken challenge from conductor to chorus, soloists, and orchestra. Welser-Möst dialed the speed up at every juncture and his forces responded without so much as blinking. The results were phenomenal — perhaps not to everyone’s taste but surely to the amazement of all.

The audience was instantly on its feet, demanding multiple curtain calls. This was an occasion when a standing ovation was not only justified, but imperative. 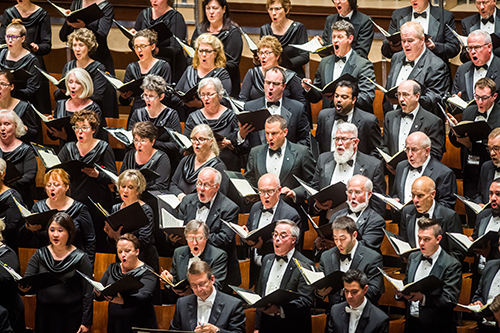 Photos by Ken Blaze, courtesy of The Cleveland Orchestra.

It might seem that there’s not a lot left to discover after three decades of experience with the Red Priest’s charming and evocative score, but this performance boasted a secret weapon: the young Spanish violinist Francisco Fullana, now the Orchestra’s artist-in-residence, whose affecting personality and easy virtuosity raised the solo part a quantum leap above the merely extraordinary. END_OF_DOCUMENT_TOKEN_TO_BE_REPLACED

END_OF_DOCUMENT_TOKEN_TO_BE_REPLACED

The Cleveland Orchestra’s second performance of the new season on Sunday afternoon, October 17 at the newly renamed Mandel Hall at Severance Music Center was just such an occasion. If the ensemble’s return to public concerts under the baton of Franz Welser-Möst wasn’t enough reason to light a bonfire, the Cleveland debut of a new work written for one of the Orchestra’s most popular soloists, and the swan song of one of its longest-serving members added extra fuel to the celebration. END_OF_DOCUMENT_TOKEN_TO_BE_REPLACED