On Friday, August 2 as part of the Summers@Severance Series, guest conductor Matthew Halls will lead The Cleveland Orchestra, soloists, and the Blossom Festival Chorus in Mozart’s “Great” Mass in c-minor.

In the United States, where the subscription concert format is the norm, single performances of major works are rare. But in a telephone conversation from Toronto, where he lives with his family for part of each season (his wife plays in the Toronto Symphony), Halls said he rather likes one-off events.

“The subscription series is lovely, especially if you’re a young conductor who’s learning a piece for the first time. It gives you the possibility to solidify your ideas over three or four nights. But there’s also a special energy in a one-off, the most common format in Europe, because it means that you only have one chance. All of the intensity of a week-long rehearsal period is focused on that single moment, and there’s no sense that you can always get it right tomorrow night.”

Halls has previously led the Orchestra in both formats — a single concert at Blossom and two weekends of subscription concerts in Severance Hall — and was quick to add, “I’ve never known The Cleveland Orchestra to get anything wrong.”

The concert on August 2 at 7:00 pm features a single, incomplete work — the grand mass for double chorus and orchestra that Mozart began writing in 1782 after his wedding to fulfill a vow. But after a performance of the Kyrie, Gloria, and Sanctus in Salzburg in October of 1783, he ultimately left it unfinished. Several movements are missing entirely (all but the first two of the Credo and all of the Agnus Dei), and in those the composer did set, some of the orchestration and choral parts are not completely filled out. Strangely enough, Mozart repurposed most of the music, with texts by Saverio Mattei, for the cantata Davide penitente, K. 469.

What remains suggests an elaborate and lengthy musical accompaniment to the celebration of Mass. “It’s intriguing and staggering to think how powerful and intense hearing those orchestral masses on a Sunday morning must have been in Vienna and in Salzburg, especially when the ink was still drying on the paper. In the modern world, we so seldom perform these works in a liturgical context,” Halls said.

Halls mentioned ‘Et incarnatus est,’ the solo movement in the Credo that Mozart wrote for his wife, Constanze, as an example of the complex musical world of the piece. “A real trailblazer, it fuzes the very highest level of writing that comes directly from opera with an austerity and a religiosity that causes no discomfort due to its secular influence. This music is something very personal and devotional.”

The first decision a conductor needs to make is whether to play the piece in the state where Mozart left it or to turn to one of several completions or reconstructions that scholars have made. “It’s always a very challenging decision, and always there are a few people involved,” Halls said. “It depends on what parts an orchestra may already have in their library, and what their own preference is.” 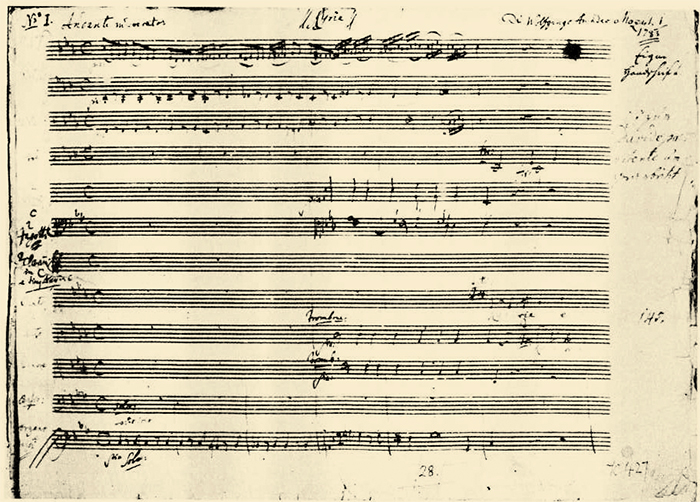 Halls has chosen the partial completion by Helmut Eder. “I don’t know why, particularly, other than nostalgia. Eder’s Bärenreiter version was my first experience of the piece, and it’s stuck with me. There are still a few interpretive decisions that have to be made, but it stands very well on its own two feet.”

Should Halls be invited to conduct one of the complete reconstructions of the Mass, he said he would “happily” suggest the one by Robert Levin. “I know Bob very well, and we’ve done a number of concerts together. I think what he’s done is an absolute masterpiece, and it’s so quintessentially Bob. His skills at improvising in the style of Mozart and other great composers are universally known and admired, and I think his completions are absolutely exceptional.”

Though the version the audience will hear on Friday is just a torso, Halls thinks it works well in the context of a one-hour concert. “When you consider the length of a Viennese orchestral mass, or a Sunday morning service at the Thomaskirche in Bach’s time, it really begs the question of how long people were expected to sit in church. Maybe people picked and chose a bit more — came in for an hour and then left.”

Having last conducted the Cleveland Orchestra Chorus in Duruflé’s Requiem, Matthew Halls is looking forward to working with its new director, Lisa Wong, and its summertime counterpart, the Blossom Festival Chorus. “I remember being very impressed by the singers’ level and their work ethic. It’s lovely for me, coming from a choral background,” Halls said, having served as organ scholar under Edward Higginbottom at New College, Oxford. “One of the great delights for me is to try to marry a choir and an orchestra together. It pulls on a unique set of skills you don’t get to exercise every other week.”

Friday’s concert will also feature a solo quartet made up of soprano Joélle Harvey, mezzo-soprano Krisztina Szabó, tenor Paul Appleby, and bass-baritone Michael Sumuel, “fabulous” singers that Halls had a hand in selecting. “There are a couple of voices I’ve worked with before and a couple of new ones, but I always trust very much the suggestions that are made by The Cleveland Orchestra. Their casting and knowledge of young talent is second to none.”

Jackson began the program with a recitation of Langston Hughes’ poem “Helen Keller” — the first of five poems by Hughes that served as interludes between each piece on the first half. END_OF_DOCUMENT_TOKEN_TO_BE_REPLACED

Pianos with pins and tape on strings, a bass drum and tam tam, crotales, Almglocken, and vibes. Microphones were hooked up all around the instruments. The feed was sent to speakers around the room. Lighting designer Nicholas Houfek hung incandescent globes over the arrangement of instruments from thin black wires stretching across the beams. END_OF_DOCUMENT_TOKEN_TO_BE_REPLACED

From the podium, Elim Chan set an ambitious tone for the evening. The rising star conductor, here in her Cleveland Orchestra debut, has a commanding style, and every twist and turn in Saturday’s performance tracked closely with her baton. END_OF_DOCUMENT_TOKEN_TO_BE_REPLACED