A long line at the Will Call window at Severance on Saturday evening, February 19 meant that a number of Cleveland Orchestra patrons missed hearing Guillaume Connesson’s Flammenschrift, the first item on Stéphane Denève’s program.

By way of consolation, soprano Fatma Said’s luminous singing in Maurice Ravel’s Shéhérazade made up for the delay.

Drawn to the exoticism of The Arabian Nights, in 1904 Ravel wrote both an overture and a three-movement song cycle on poems by Tristan Klingsor. We heard the song cycle, which Caroline Rae described in a Philharmonia Orchestra essay:

All three songs are tranquil and reflective, opening and closing in a veiled piano, while the sensuous orchestral sound combines with a rich harmonic palette, in which added seconds, sevenths and ninths abound, to create a sense of yearning and nostalgia.

The set also follows an unusual emotional trajectory: instead of growing in intensity from beginning to end, Ravel’s music gradually subsides into what Rae describes as a “languid sensuousness” from its original “rich voluptuousness.” 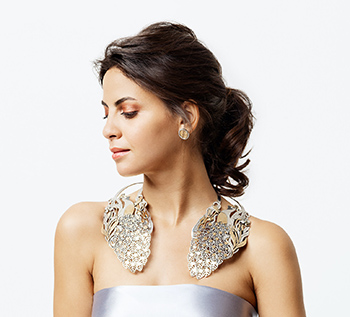 After the interval, the stage filled with musicians for Mahler’s First Symphony, an exuberant orchestral extravaganza whose complicated gestation would take several pages to relate in detail. It started out as a “symphonic poem” with a literary program attached, then discarded. A movement was added but later withdrawn. Revisions abounded until the piece reached its final form in the last two years of the 19th century.

The composer once said, “A symphony must be like the world. It must contain everything.” In his first symphony, Mahler indeed brought the sublime together with the banal, and included a bit of everything in between. “This introduction describes the awakening of nature at the earliest dawn,” he wrote at the top of early versions of the first movement. And it’s difficult to imagine a more exquisite piece of tone painting, or a lovelier transformation of isolated motives into a song than Mahler’s transition into Ging heut’ Morgen über’s Feld.

“Dall’inferno al Paradiso, as the sudden expression of a deeply wounded heart,” is what he wrote at the beginning of the finale, an overwrought movement that has so many false endings, multiple climaxes, and near-lapses of good taste that you’re tempted to think Mahler stole his ideas from Hollywood — but then you realize that Mahler got there first.

Whatever you think of Mahler 1, the performance on Saturday by Denève and the Orchestra was nearly flawless. The offstage trumpet fanfares near the beginning were atmospheric, the eight gleaming horns made magnificent contributions to the tuttis, principal bass Maximilian Dimoff made a lyrical moment of the minor-key Bruder Martin tune in the third-movement funeral march, and later, winds and percussion aptly represented the incursion of a klezmer band. When the fourth movement finally came to a definitive climax, it did so brilliantly, thanks to the prowess of The Cleveland Orchestra. The ovation was tremendous.

END_OF_DOCUMENT_TOKEN_TO_BE_REPLACED

Supported by engagingly, yet simple staging by Cara Consilvio, a well-prepared cast of singers told the archetypal story of Cinderella with charm and flair. Framing the production was  a sparse but colorful set and wonderful lighting by Dave Brooks. END_OF_DOCUMENT_TOKEN_TO_BE_REPLACED