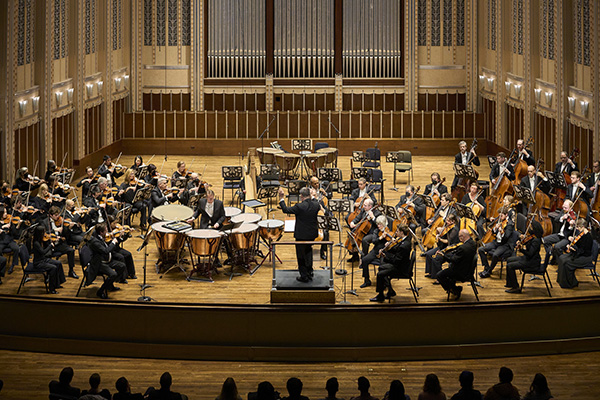 Rebounding with vigor on January 5 from its loaded holiday schedule while other ensembles were still in recovery mode, The Cleveland Orchestra gave a thoroughly enjoyable concert of completely unrelated works, including a new concerto by James Oliverio featuring principal timpani Paul Yancich, and not-so-often performed symphonies by Joseph Haydn and Carl Nielsen.

Presiding over this interesting stew like an adventurous chef, guest conductor Alan Gilbert threw in a surprising ingredient or two that the smallish audience of 800 lapped up as if hungry for something both piquant and nourishing after a diet of Noëls.

The Mandel Hall stage was full of drums — the normal number at the back of the orchestra, plus seven more set in a tight circle where the first violins usually hold forth — for the opening work, Oliverio’s Legacy Ascendant, Concerto for Timpani and Strings, commissioned by The Cleveland Orchestra. 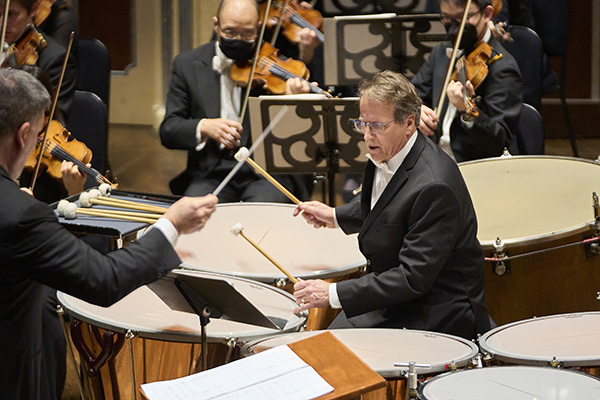 The third concerto Oliverio has written for Paul Yancich or his brother Mark (principal in Atlanta) came with Paul’s request that the instrumental complement be strings only and that it would engage musical dialogue among all the instruments. The timpani are solo instruments that can be uniquely melodic and percussive at the same time, but using them effectively is still a challenge for a composer. Oliverio elected to add a harp to the mix for variety, and wisely abstained from the more clichéd timpani effects while still giving Yancich’s impressive stick technique and tuning capability plenty of opportunities to shine. 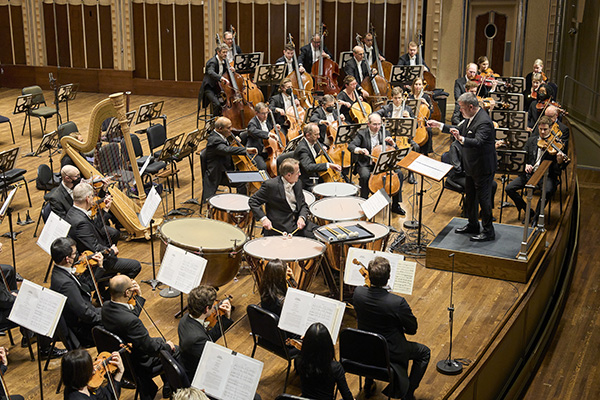 The piece is engaging and satisfying to watch and listen to as it progresses along the timeline of life in movements entitled “Then,” “Halcyon,” and “Once Again,” and if it sounds like very high quality film music now and again, its composer has won five Emmys for his television scores. I found myself very happily constructing a narrative for each movement as the music unfolded and sparked synapses in the memory.

Yancich was superb in his solo role, out front but unobtrusive, always lyrical and musically sensitive, and his long decrescendo that ended the piece was unusually expressive. 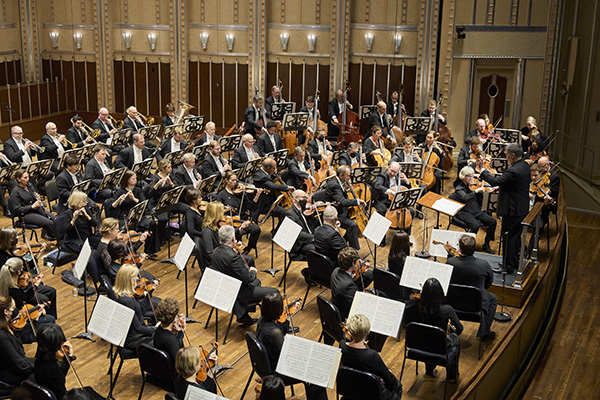 The presence of a microphone on a stand near the podium suggested conductorial remarks were planned, but Gilbert wisely let the music speak for itself. He did seize the opportunity to be playful with the finale of Haydn’s Symphony No. 90, which behaves like a never-ending rondo.

There always seemed to be another repetition waiting in the wings, and if the conductor “lost track,” the concertmaster leapt up and reminded him. This went back and forth several times, Victor Borge-like, and you had to be there to appreciate the humor.

Haydn’s symphonies abound in wonderful wind writing and the Orchestra, many of whose principal players had turned their duties over to their assistants, sounded clear and played with finesse. Flutist Jessica Sindell was a standout, as was oboist Jeffrey Rathbun in the third movement Trio. 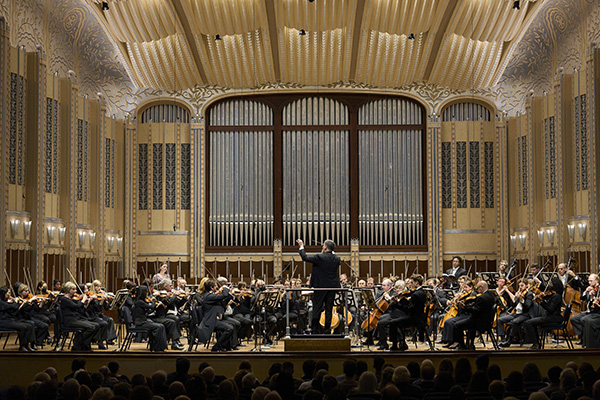 Nielsen’s four-movement Sinfonia espansiva ended the evening with glorious sonorities and some surprises, beginning with slashing opening gestures and continuing in a number of different stylistic directions. A splendidly balanced horn quartet launched the second movement, which continued with the arresting effect of soprano and baritone solo voices (Liv Redpath and Justin Austin, pictured), singing wordlessly from the middle of the string sections. Those vocalists were replaceable, Nielsen noted, by clarinets!

END_OF_DOCUMENT_TOKEN_TO_BE_REPLACED

The strings-only work by Berg has made relatively frequent appearances on the Orchestra’s programs. In 2021, the musicians recorded it for the In Focus series, and it appeared again on last year’s European tour. Friday’s rendition maintained the group’s characteristic light and effortless playing, each section blending as much as possible to echo the work’s original form as a string quartet. At fifteen minutes total, the piece is quite short, but the dense encoded musical meanings require some extra-attentive listening. Splitting up the three movements ensured that each one could be appreciated on its own. END_OF_DOCUMENT_TOKEN_TO_BE_REPLACED