Only two works made up the program for Matthias Pintscher’s guest appearance with The Cleveland Orchestra at Severance Hall on Thursday, November 1, but they were big ones. Pianist Kirill Gerstein — always worth a few surprises — brought a breezy, fresh interpretation to Rachmaninoff’s Third Concerto, and Pintscher and the Orchestra labored mightily to make the music of Bartók’s infrequently performed ballet The Wooden Prince work as a symphonic poem without dancers.

It doesn’t take long for the seemingly simple opening gestures of the Rachmaninoff to morph into the composer’s signature emotional extravagance. Most performances reach that point and lock in for the duration. Gerstein and Pintscher took a slightly different tack, producing a supple reading with abundant subtleties and a clear architectural blueprint. An urgent cadenza, a lovely chorale, and an abrupt and powerful Mahlerian march were highpoints on the journey. And if ensemble between soloist and orchestra got a bit out of phase toward the end, that happens with some frequency at this point in the piece, no matter who’s performing.

After being called back several times, Gerstein treated the adoring crowd to a charming performance of Chopin’s Waltz in A-flat. 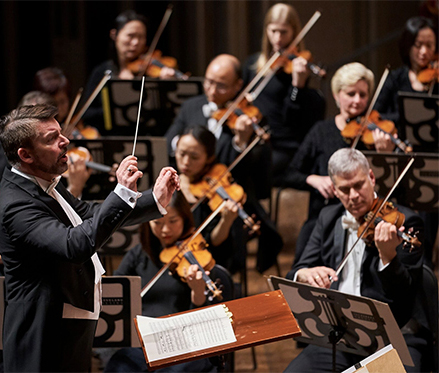 Bartók’s fairy-tale ballet The Wooden Prince, written and first performed during World War I and only played twice before by The Cleveland Orchestra, calls for an extravagant ensemble with quadruple winds (including two contrabassoons), alto, tenor, and baritone saxophones, two harps, and celesta (four hands!), most of which are called on to play continuously for more than forty minutes.

Pintscher paced the work expertly, leading the Orchestra with a composer’s attention to detail, balances, and trajectory.

There are lovely moments in the score, including clarinet solos alluringly played by Afendi Yusuf, but the audience grew restive midway through. You can tell when people start getting lost in the narrative and begin flipping through their programs for navigational assistance. Without dancers, The Wooden Prince needed more elucidation than merely a thick paragraph in the program book listing its many movements. Where are supertitles when you really need them?

Jackson began the program with a recitation of Langston Hughes’ poem “Helen Keller” — the first of five poems by Hughes that served as interludes between each piece on the first half. END_OF_DOCUMENT_TOKEN_TO_BE_REPLACED

Pianos with pins and tape on strings, a bass drum and tam tam, crotales, Almglocken, and vibes. Microphones were hooked up all around the instruments. The feed was sent to speakers around the room. Lighting designer Nicholas Houfek hung incandescent globes over the arrangement of instruments from thin black wires stretching across the beams. END_OF_DOCUMENT_TOKEN_TO_BE_REPLACED

From the podium, Elim Chan set an ambitious tone for the evening. The rising star conductor, here in her Cleveland Orchestra debut, has a commanding style, and every twist and turn in Saturday’s performance tracked closely with her baton. END_OF_DOCUMENT_TOKEN_TO_BE_REPLACED