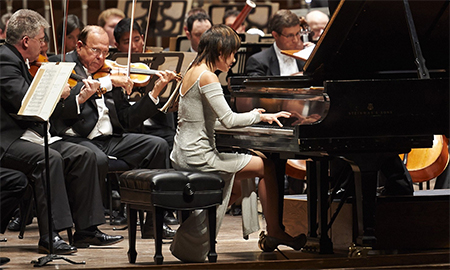 Six movements from Prokofiev’s Chicago-premiered opera, The Love For Three Oranges, launched the evening with sassy fanfares and gutsy violin statements, with tempos well-controlled from the podium. That opening salvo was titled “Ridiculous People,” followed by “The Magician and Witch Play Cards,” which began in murkiness and advanced to an orchestral din with a repetitive theme swirling through the orchestra like the wind-swept leaves outside.

The famous “March” was well-behaved, reined in by Viotti, who let his control down for the “Scherzo” that followed. Slow and expressive, “The Prince and the Princess” featured pensive wind solos and strong tutti strings. “The Escape” ended the suite with psychotic violins, cataclysmic brass and percussion, and for relief, a dialogue between solo horn and oboe. Quite a lot of stimulation for an opening work.

After a long wait, Yuja Wang emerged for Rachmaninoff’s Fourth Concerto, an episodic work which trots out all the elements in the composer’s toolbox without making convincing transitions from one to the next. Piano chords are pitted against offbeat winds at the beginning, and the rest of the movement vacillates between ecstatic outbursts and calming oases amid string-section unisons and sinister bass octaves in the piano.

Solo piano followed by rich string textures announce the Largo, which is interrupted by an orchestral explosion and followed by long, harmonically complex lines.

The finale begins with scampering piano gestures that expand to explore the entire keyboard. Lyrical lines are introduced as Rachmaninoff pursues a number of conversational hares, then brings the movement to a full stop. Timpani sets the finale off again on a rather chaotic wandering through the woods. The composer seems to be searching for the opportunity to introduce one of his big, signature tunes, but in vain. As if in frustration, the finale ends with a dismissive gesture.

Yuja Wang was characteristically dazzling at the keyboard. Easily cutting through the orchestral texture without overplaying, her tone was bright but not brittle, strong but not strident. The audience reacted with an overpowering ovation.

After several callbacks (and more long waits), the pianist returned for two encores: a big, flashy one — the toccata from Prokofiev’s Seventh Sonata — followed by a charming one — Art Tatum’s embellishment of Vincent Youmans’ Tea for Two.

The second half began with Poulenc’s Sinfonietta, much like the Rachmaninoff, a catalogue of the composer’s signature gestures. The perky opening Allegro gives way now and again to wistful tunes. The Scherzo is vintage Poulenc. A long, soulful clarinet solo by Afendi Yusuf over pizzicato strings brought elegance to the Andante, whose ending finally decides to venture into the major halfway through the last chord. The piece concludes with an urbane, sometimes burlesque-like “Très vite et très gai” whose terse ending was reminiscent of the Rachmaninoff.

Viotti jettisoned his score for Ravel’s La Valse, which begins in a colorful stew of musical fragments that suddenly coalesce into a full orchestral texture. The conductor led a performance that was animated, capricious, and full of nuance. When a thud on the bass drum set the piece careening toward its conclusion, it was like the grand finale of a fireworks display — completely over-the-top dazzling.

Photo of Yuja Wang from an earlier performance by Roger Mastroianni.