Recognized for his prodigious output of symphonic film scores during the 1930s and 40s, Viennese composer, conductor, and arranger Erich Wolfgang Korngold was well-known in Europe for his concert and chamber music, operas and stage works before arriving in Hollywood. After the end of World War II, the composer retired from film music in order to dedicate himself to writing music for the concert hall. One of the first works he penned was his Violin Concerto, which received its premiere on February 15, 1947 by Jascha Heifetz and the St. Louis Symphony.

On Sunday, May 8 at 3:00 pm at Severance Hall, Cleveland Orchestra Youth Orchestra competition winner Jieming Tang will perform Korngold’s virtuosic concerto as part of the concluding concert of COYO’s 30th-anniversary season. Under the direction of music director Brett Mitchell, the program will also include Adam Schoenberg’s Finding Rothko, and Sergei Rachmaninoff’s Symphonic Dances.

“This is going to be a very special concert,” Brett Mitchell said during a telephone conversation. “These are all magnificent but challenging pieces, but with no surprise the orchestra has risen to the occasion admirably.”

Mitchell said that when he first looked at the repertoire list of the players who had entered the concerto competition, he was not surprised to find works by Mozart and Beethoven, but the inclusion of the Korngold did cause a second glance. “When I saw the Korngold Violin Concerto I thought, ‘Boy, that’s an awfully hard piece.’ But when saw that it was Jieming I thought, ‘OK, he’s such a great player.’” 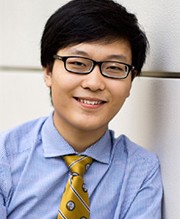 Mitchell said that choosing a winner is always a tough job, but the level of performance by all of the contestants was extraordinarily high this year. “When you listen to a student perform, whether it’s a recital or a competition, you want everybody to do well and you are rooting for them. When Jieming played, we all sat back and just enjoyed the performance. I’m  thrilled that we’re getting to play the concerto with him. He’s sat concertmaster for so many performances over the past three seasons, and he’s been an absolute pleasure to work with.  He’s a lovely human being and works extremely hard, so it’s a pleasure to be able to offer him this experience that he has 100% earned.”

Although Mitchell was aware of Adam Schoenberg’s music for a long time, it was not until he began preparing to conduct a concert with the Dallas Symphony this past March that he discovered Finding Rothko. “We were looking for another piece for that program and it just so happened that it fit the bill. It’s a marvelous work that has become near and dear to my heart. In fact, in addition to this COYO concert, I’ll be conducting it on two other occasions later this year,” he said. “What’s been fun is that I had a lot of questions for Adam about the piece, so we’ve become quite good friends from afar. It’s very colorful as you can imagine, given the title, and many members of the Dallas Symphony told me how nice it was to play a contemporary piece by a composer who is not afraid of melody and harmony.”

It is often said that Sergei Rachmaninoff’s Symphonic Dances, the composer’s final work, summarizes his compositional output, and Brett Mitchell pointed out that it is very different from the second and third piano concertos, the rhapsody, and the second symphony.

“When you think of Rachmaninoff, you generally think of his romantic lyricism. But when you come across this great final masterpiece that he wrote right at the end of his life, there’s nothing ‘romantic’ about it. There are wonderful melodies, but this is a mature Rachmaninoff who is confident in his ability as a composer. He didn’t feel that he needed to write the big tune, yet the piece still holds an audience for more than half an hour because of its extraordinary colors. And for the first time ever, he included a saxophone. He was experimenting right up to the end.”

Published on ClevelandClassical.com May 5, 2016.

Music director and conductor Daniel Meyer built his playlist around Cleveland themes and scenes. “Exploration CLE” made use of engaging selections from the classical canon and beyond that celebrated “what makes Cleveland so special.” Happily, he and his musicians avoided constructing a visual slide show, choosing to let the music speak for itself. END_OF_DOCUMENT_TOKEN_TO_BE_REPLACED

You could see the relationship at work on a practical level. Repertoire for two players at the same piano requires a certain choreography. There’s just one of each pedal to share, and the hand crossings left and right — which can be so fun to watch a soloist pull off — get more complicated when another person’s involved. At times, Pompa-Baldi drew a hand away from the keyboard and into his body, making room for Friscioni, and at the close of a few delicate phrases, the two were crouched together over the same final notes at one end of the instrument. END_OF_DOCUMENT_TOKEN_TO_BE_REPLACED

The signature sounds of these famous film scores are not so much John Williams’ invention as allusions to other classical pieces. The foreboding half-step from Jaws, growing more and more furious in the cellos and basses, shares something with Dvořák’s “New World” Symphony and Bartok’s Miraculous Mandarin. END_OF_DOCUMENT_TOKEN_TO_BE_REPLACED